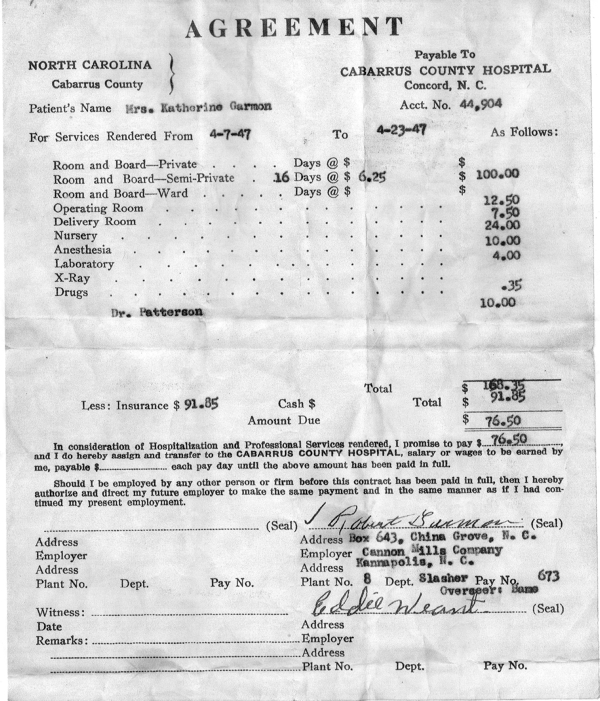 David Garmon of China Grove submitted this paper copy of a Cabarrus County Hospital bill that was among his mother Katherine’s papers when she died. The bill is for services rendered to David’s parents, Robert and Katherine Garmon, when he was born on April 7, 1947, and his mother’s subsequent hospital stay of 16 days. David Garmon isn’t sure what the complications might have been with his mother after his birth, but he marvels at the charges back then. The Garmons were charged $6.25 a day for Katherine’s room, totaling $100. Other charges were $12.50 for use of an operating room, $7,50 for the delivery room, $24 for the nursery, $10 for anesthesia, $4 for lab work and 35 cents for drugs. Her total bill was $168.35. After insurance paid $91.85, the Garmons faced a bill of $76.50. David Garmon said he and his family lived in a Cannon Mills house in China Grove, where his dad worked at Plant No. 8. Garmon thinks he was the first and only child among the five in the family to have been born in a hospital. All the others were born at home. Another interesting thing about the bill, Garmon says, is that his father had to sign a promise at the bottom that his wages could be garnished to pay the bill and that he was obligating any future employer to keep garnishing the wages until the hospital bill was paid. His overseer in the Cannon Mills slasher department, Eddie Weant, signed the bill agreeing to those terms.

Jimmie Higgins provided this photo of students and teacher of the Rowan Cotton Factory School. The photograph was part of a... read more