Little League champions: How they did it 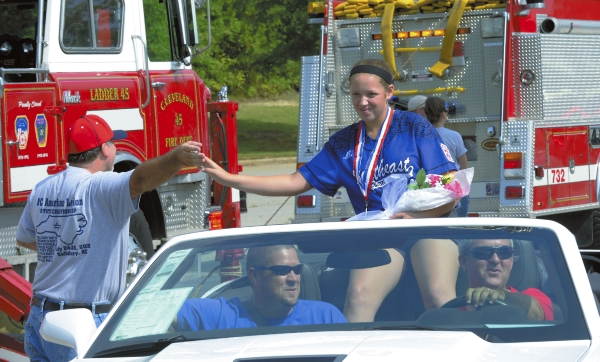 Team pitcher Kali Morton gets a high- five as she rides into Salisbury Community Park Saturday during a celebration for the World Series Champions. Photo by Wayne Hinshaw, for the Salisbury Post.

In what may be some kind of record, photos of Kali Morton appeared on the front of the Salisbury Post sports section four days in a row last week, and six of seven days.

Morton, the 13-year-old pitcher of the Rowan Little League team that won the World Series in Portland, Ore., last Wednesday evening, was the anchor of the local squad that shocked the world.

So when asked how it feels to achieve a “rock star” status, the eight-grader had a curious response:

She didn’t quite understand the phrase in all fairness. Being born in 2002, she wouldn’t know anything about when rock bands KISS, Journey and others ruled the world.

But this team did achieve rock-star status. They had a motorcade return from the airport on Thursday night. Social media started heating up Friday afternoon that they were going to arrive at Salisbury High School’s football game just before kickoff. Reportedly, it was then on to DJ’s Restaurant, where the girls caused a stir among patrons, excited to see them.

On Saturday, the parade in downtown Salisbury and the champions’ reception at their home field in Salisbury Community Park was a huge success as more and more accolades rained down on the girls, coaches and their parents. The praise was well-deserved.

So, in all of the euphoria of the world championship, how about a quick recap of how it exactly happened?

First, the team won the Southeast Regional title on Aug. 3 in Warner Robins, Ga., beating the host team, a perennial power, 2-0. Rowan overcame a confident and talented team and loud home crowd to claim the championship and berth to the World Series.

The Southeast champs traveled to Oregon on Aug. 11, already knowing they were in Pool B with teams from British Columbia (Canada), the Philippines (Asia-Pacific), Snohomish, Washington (West) and Slater, Iowa (Central).

Wednesday, Aug 12: Rowan enjoyed being a part of the opening ceremonies and an ice cream social for all teams and of course, there was time to get in a practice session.

Thursday, Aug. 13: Rowan’s first game in the World Series began at 1 p.m. Pacific time.  Rowan made an immediate statement, jumping on Canada for three runs in the top of the first inning. It was as if things were scripted: Lead-off hitter Allison Ennis gets on by error, Kary Hales singles and Morton singles. Boom, 1-0, just like that. The Canadians are so over-matched, Morton only pitches three innings before turning things over to Hales and Taylor Walton. It’s an easy 10-1 victory. Hales and Morton get two hits each and Taylor Sanborn singled and scored a run.

Friday, Aug. 14: Rowan’s off day in the pool play schedule, so coaches Steve Yang, Rob Hales and Eric Dowling have more practice for the girls, mixed in with a little sight-seeing and watching of other games.

Saturday, Aug. 15: Momentum comes to a halt as Iowa hands Rowan its only loss during its postseason run, 3-1. The battle of two great pitchers, Morton and Iowa’s Mikayla Houge, goes as expected — both allow just two hits. Houge struck out five and walked one. Morton fanned four batters but walked three and Rowan, uncharacteristically, made three errors. Coach Hales said later that there were several mental errors by Rowan, who seemed to get all of the poor play out of its system in this one game. Megyn Spicer and Jaden Vaughn had Rowan’s only hits.

Sunday, Aug. 16: Rowan bounces back big against another overwhelmed squad, winning 12-0, over the Philippines. Rowan scored one run in the first inning and five in the second, and coasted from there. Morton struck out eight batters in five innings and allowed but one hit. The offense got three hits and three RBIs each from Hales, Caitlin Mann and Ellen Yang. Morton added two hits while Kaylin Dowling and Ellie Wilhelm score two runs each. And the team played error-free defense.

Monday, Aug. 17: The well-documented “tank” game by Washington overshadowed another solid performance by Rowan and an 8-0 victory — one that advanced the team into the World Series semifinals. Ennis led the way with three hits and Walton added two. Liza Simmerson had a big RBI-double. Morton only had to pitch four innings, combining with Walton for a no-hitter. It was the only game in which Rowan got to be the home team and bat last, but that wasn’t a factor anyway.

Tuesday, Aug. 18: A national ESPN audience saw just how good Rowan was, as the girls from Salisbury pounded the No. 2 seed from the other pool, Texas, 8-0. Ironically, it was the same score as the day before. Rowan broke open a fairly tense, 3-0 game in the fourth inning with three more runs. Morton had a single, double and triple at the plate, in addition to pitching a five-hit shutout with 12 strikeouts, her best performance in Portland. Mann added two hits and two RBIs and Caylie Keller had a run-scoring double as well.

The ESPN announcers seem to be leaning toward Texas and first semifinal game winner Rhode Island as favorites during the first part of the broadcast. However, by the end of the telecast, they were starting to see what Rowan’s team was about — heart, solid pitching and defense, timely hitting and speed.

Wednesday, Aug. 19: Another TV audience, although ESPN had to switch channels at the last minute, no doubt sending some viewers into a brief panic. Again batting first, Rowan jumped on Rhode Island for four runs in the first inning, three coming in on Yang’s ground ball single through the right side. Three runs scored and Yang ended up at third base after an overthrow. The double fist bump by the Yangs, Ellen and third base coach and dad Steve, became an iconic moment of the TV coverage, playing over and over on Sportscenter, throughout the night. Ennis had started the uprising with a lead-off single, a hard “statement” shot to left field.

The early 4-0 lead seemed like just the start to a blowout, but to Rhode Island’s credit, the East champs battled. Morton again went the distance, allowing four hits but striking out just three batters, showing the quality of the runner-ups’ hitters.

A line drive caught by first baseman Hales was the last out of the game and the celebration — and tears of joy from Oregon to Salisbury, began.

As a team, Rowan was 48-for-156 at the plate (.308) and outscored its opponents during the six games, 43-6. Coach Yang used all 13 squad members brilliantly and it was indeed a true team effort. The team defense was amazing, committing only four errors in six games, one miscue outside of the three made against Iowa.

But if an MVP award was given, it would have to go to Morton. She hit .444 (8-for-18) and drove in five runs, and in the circle, Morton was 5-1 and pitched 29 innings, allowing just 13 hits and two earned runs (0.41 ERA). She struck out 33 batters. However, the rock star would tell you that there was room for improvement — she walked 11 hitters.

The Rowan Little League team not only captured the World Series championship, it captured the heart of a community. The feeling will last for a long, long time.

Catawba Football: Indians ready to lay it on the…