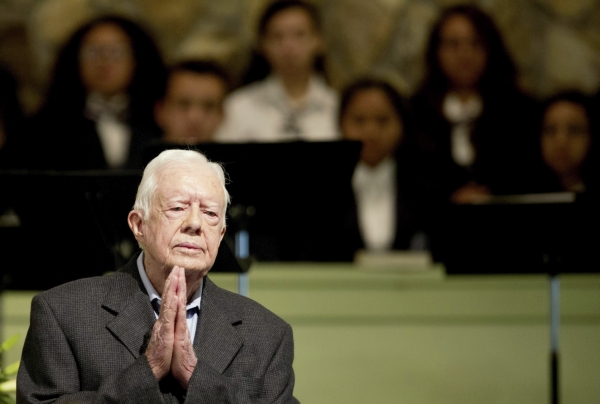 When Ronald Reagan announced in November 1994 he had been diagnosed with Alzheimer’s disease, even some of his most ardent political opponents paused to wish him well.

It was the same last Thursday when former President Jimmy Carter, who will soon be 91, held a news conference in Atlanta to announce that a cancer first discovered in his liver has spread to other parts of his body, including his brain.

While death is the ultimate end of all on Earth, the knowledge that one’s expiration date is getting close has a way of focusing the mind, and not just for the person who has received the news. Reporters at the news conference were unusually deferential to Carter, which has not always been their attitude since he left office in 1981.

What struck me was not only Carter’s humility and gratitude for the opportunities and privileges he has enjoyed, but the inner peace he exuded. Evangelical Christians like Carter understand this from a Bible verse that says “And the peace of God, which passes all understanding, shall guard your hearts and minds in Christ Jesus.” (Philippians 4:7)

One can disagree with how Carter applied his faith, whether as a liberal on social issues like abortion and gay rights, or internationally where he frequently has cited Israel — not her enemies — as the main impediment to Middle East peace, but Carter probably has a better knowledge of the Bible’s contents than any president since Abraham Lincoln.

I attended Carter’s Sunday school class at First Baptist Church in Washington, D.C., where he sometimes delivered the lesson. When at Camp David, he held services attended by family members, staff and invited guests. His example was cited by some in the Christian community as having a positive influence on people not well acquainted with the inside of a church building.

Reporters who accompanied Carter to church rarely reported on what he said. Mostly it was, “The president went to church today, and in other news…” They seemed disinterested, even though Carter’s press secretary, Jody Powell, cited in Wesley Pipperts’ book “An Ethics of News,” observed, “…the American people, as a whole, are probably better equipped to understand that aspect of Jimmy Carter’s life than are the people who are trying to explain it to them.”

Pippert, who was a UPI White House correspondent during the Carter administration, wrote a book called “The Spiritual Journey of Jimmy Carter, in His Own Words.” While teaching the Sunday school class on January 29, 1978, Pippert quoted Carter as saying: “You can’t say, ‘Tomorrow, I’m going to have inner peace in my heart…’ It slips away from us. It’s not something guaranteed to each of us. If we subjugate our lives to God, if we open our hearts to the Holy Spirit, if our life is consistent with the purpose or example of Christ … in our relationship with God, and others, then we will have inner peace…”

That statement, more than the optimism of doctors who are treating him, reflects the source of Carter’s contentment, which many in the media still do not understand.

In the former CBS television series “Touched by an Angel,” Martha Williamson, the show’s executive producer, wrote these words for “the angel of death”: “Death is nothing to fear, but it is something to prepare for.”

Jimmy Carter is prepared. Even his political opponents should celebrate the good he has done, and especially in following the example of Harry Truman, who also did not cash in on the presidency after leaving office. As Carter approaches not the end, but a new beginning, his political detractors, and even his supporters, might consider some self-examination to make sure they, too, are prepared.

“Straight Outta Compton” to your community

By Dr. Ada Fisher “Straight Otta Compton” is an astonishing bit of social commentary that can’t be ignored.  The misogynist... read more