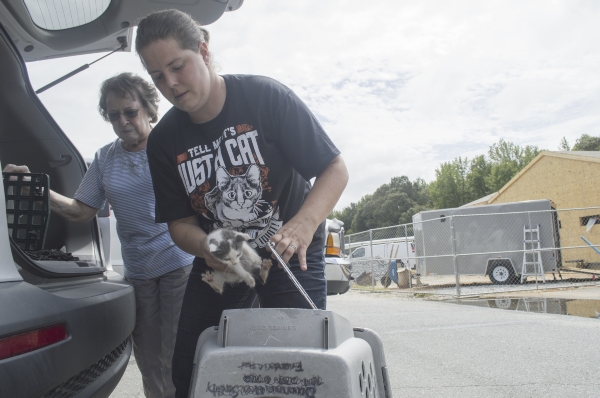 Josh Bergeron / Salisbury Post - Jen Frasier, who runs a cat non-profit rescue group, loads feral cats into a kennel on Thursday at the Rowan County Animal Shelter. The shelter has seen a large influx of cats in recent weeks.

During the past year, the Rowan County Animal Shelter’s adoption rate has hovered in the state’s top tier. If county commissioners finalize a proposed trap, neuter and release program for feral cats, however, the top-notch adoption rate could become easier to sustain, according to local animal advocates.

The Rowan shelter’s adoption rate is largely propelled by rescue groups. In June — the shelter’s second best month ever for adoptions — rescue groups represented 70 percent of total adoptions. Adoptions by individuals represented about 30 percent, according to animal shelter statistics.

Although the shelter euthanizes animals after designated periods of time, it’s been rare compared to others for Rowan to euthanize an animal considered adoptable.

In recent weeks, the group Purfect Purbaby Rescue has been an example of rescue groups preventing animals from being euthanized. As of Thursday, more than 200 cats had been brought to the shelter in August, according to shelter statistics. A majority of the cats were adopted by Purfect Purbaby Rescue.

Jen Frasier, who runs the rescue group, planned to save 20 cats on Thursday alone. Frasier said the number of cats her group has rescued this year is literally impossible to count. She estimated, however, the number was in the hundreds.

“I guess it’s just kind of an addiction,” Frasier said. “But, it’s not just me. There’s a lot of people that help to donate and help foster the cats.”

Most of the cats Frasier adopts are considered feral or unsocialized cats. In fact, most of the cats brought to the Rowan County animal shelter in August — 144 of 203 — are feral cats, according to statistics provided on Thursday. The trap, neuter and release program, Frasier said, would reduce the number of cats coming into the shelter by lowering the overall birth rate.

The problem begins, she said, when people begin to leave food outside for a single feral cat. The single cat may later have a litter of kittens. After a couple litters of kittens, Frasier said that, over time, a single feral cat could become 20. To help increase the number of individual adoptions, Frasier’s group offered to pay $30 toward any non-rescue adoption on Thursday and Friday.

The trap, neuter and release program would be more effective, she said.

“If a cat is spayed or neutered, there’s not a chance it will have a littler of kittens, which could end up in the shelter,” Frasier said.

The trap, neuter and release program — proposed by local vet Rebekah Julian — would spay or neuter feral cat colonies and return them to the pick-up location. No Pet Left Behind, a group that Julian helps run, would help facilitate the trap, neuter and release program. During their Monday meeting, commissioners approved the program, but still have to remove cats from the county’s leash law before it can become official.

After commissioners approve the program, animal advocate Barbara Hart, who was sitting in the audience, let out a little cheer. Hart, like other animal advocates, say the trap, neuter and release program would reduce pet overpopulation problems.

“I think the numbers will certainly go down,” Hart said. “But, I think what really needs to happen is to get individuals instead of rescue groups to adopt cats. Foster groups only have so much space.”

Tiffany Weber, who fosters cats for Frasier’s group, has three cats and three dogs that she considers her own, and is one example of a quickly filled-up foster home. Besides her own animals, Weber fosters six more cats.

Although Weber has fostered cats for a few months now, she hasn’t yet adopted one out to a family. Medical treatment and training are needed before a permanent home can be found, she said.

Not only is Monday the first day of school, it’s also the Rowan-Salisbury Board of Education’s first business meeting of... read more