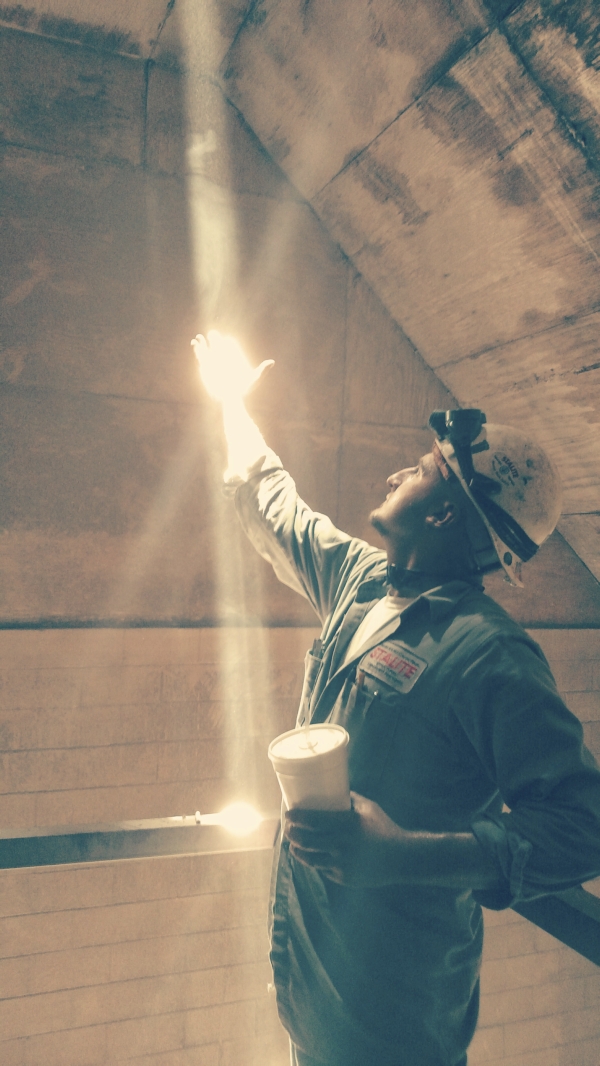 Grayson Morgan holds his hand up to a beam of light in a building at Carolina Stalite in Gold Hill. Grayson died a few weeks after the photo was taken. Family members say they see a small angel in the beam above him. Photo by Patric Boger.

Elizabeth Cook: A life passes, and an angel appears

For the third time, she lost a grandchild much too young.

Grayson Lee Morgan was 25 when his car ran off  Old Beatty Ford Road in Gold Hill on Aug. 2, first going off to the right, then back across the road and off the left side. His Honda Accord slammed into a brick-and-slate marker in front of St. Paul Wesleyan Church, crushing in the passenger side door.

A heavy piece of slate struck the young man in the head, says his father, Greg Morgan.

Grayson died at a Winston-Salem hospital the next day.

“He was going to look at a four-wheeler,” Gerald says. It was 11:30 at night. Grayson had been working long hours at Carolina Stalite and the family believes he fell asleep at the wheel. The Highway Patrol found no contributing factors or skid marks.

Grayson was all about the outdoors. He went dove and deer hunting with his dad, duck hunting with friends. Family members say they can still hear him shooting his gun and cranking up his engine.

He rode his horse, Bo, on the Wagon Train and other trail rides, and even took Bo to Love Valley to ride with friends. When he wasn’t on a horse, he might be riding a four-wheeler or driving his prized pickup in the mud.

Grayson lived with his mother, Ann Vanhoy. His other grandmother, Marcine Peacock, was across the road, and his dad’s house was close by.

Greg Morgan gives a sad chuckle telling how Grayson would drive over in a golf cart with his dog, Maggie, perched in the passenger seat.

A welder, Grayson had been working at Carolina Stalite for about a year and was doing well. “He loved his job,” his mother says. “He was really getting going.” Life was good.

Then, suddenly, Grayson was gone.

Gerald Ann knows this kind of loss too well. Another grandson, Brandon Morgan, died five years ago after a weight fell on his throat while he was weightlifting at his Texas home alone. Granddaughter Steffi Poteat, 3, died in 1997 after an undetected diaphragmatic hernia burst.

Grief weighed heavily on Gerald once more. Then she saw the angel.

Grayson and coworkers were in a building at Stalite on July 8 when he noticed a beam of sunlight shining through an opening in the roof. Grayson held his hand up to the light and said to friend Patric Boger, how about taking a picture?

Patric shot the photo with his phone. After the accident, he shared it with a relative of Grayson’s, and soon everyone had the ethereal image. In it, Grayson stands looking skyward, his face bathed in soft light. The beam seems to shine through his uplifted hand, turning it a bright white.

Looking at the photo early one morning when he couldn’t sleep, Greg Morgan enlarged it on his phone and took a closer look. He called his mother, who had sent it to him. Mama, look at your picture, he said. There’s an angel up above Grayson.

If you look closely, you may see it too. Midway between Grayson’s hand and the top of the photo, there’s a little white shape that looks like the profile of a small angel facing left, a wing visible in back.

Patric had taken pictures of two other men standing at the same spot that way, and no such image showed up in their photos.

The family had a quilt draped over Grayson’s casket for visitation and the funeral; atop it lay his two Bibles.

Grayson had talked with Gerald and others about matters of faith in recent weeks.

No one is saying what they think the angel image means. They don’t know; they are in awe. Gerald just wants people to know about Grayson’s angel and to know the grandson she lost.

Several members of the family have framed copies of the photo now,  and Gerald found a poem that goes right with it, “Waiting in the Light.” The last lines go like this:

One day you will see me again,

Once more within your sight,

I’ll be right here to walk you in.

I’m waiting in the light.

Gerald takes comfort in this. Her heart is still broken. But looking at the picture, she feels closer to her grandson Grayson. And she knows he is waiting  for her, waiting in the light.

Editorial: Finding a cure with a cone

If you drove by the West Innes Street Animal Hospital Saturday afternoon, you might have spotted Brandy Strickland (Downs), her... read more