Catawba Football: Indians ready to lay it on the line 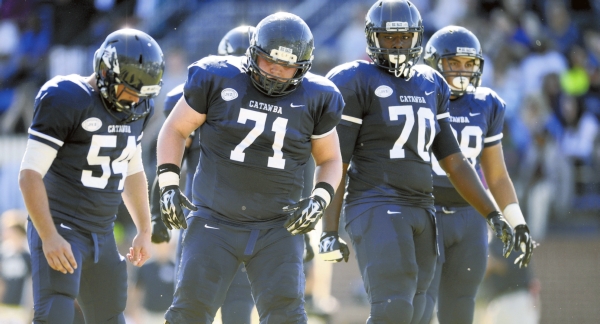 JON C. LAKEY / SALISBURY POST file photo Catawba’s offensive line should be a strength this season, behind experienced players like Lewis McCormick (70) and Tim Pangburn (71). The Indians open at home on Sept. 5 against nationally-ranked West Georgia.

SALISBURY — Everyone is still undefeated and dreams of making moms proud and winning championships are part of every college football squad’s camp.

For Catawba, the relentless optimism of August may be justified.
Everyone from head coach Curtis Walker to returning quarterback Mike Sheehan to offensive line coach Brian Hinson to the cheerleaders and trainers, believes the offense will be the best it’s been in years.
Saturday morning’s scrimmage solidified a veteran offensive unit’s growing confidence.
“Second play of the scrimmage and (running back) David Burgess goes 95 yards for a touchdown,” Walker said. “We believe our defense is faster than last year, but no one caught him. And then Burgess adds a 70-yard catch for a touchdown. Our offense was explosive today. Our offense was firing on all cylinders. We pushed our defense to the limit very quickly.”
Sheehan and backs Burgess and Cary Littlejohn have proven themselves. Dazzling receiver Carlos Tarrats should be all-everything.
And then there’s the offensive line.
“That’s a really good group, a fun group,” Sheehan said. “A lot of them are back and that’s a big reason we’re ahead of where we’ve been the last few years. We’ve also got young talent behind the veteran linemen now. We’re as deep as we’ve been.”
The offensive line’s scrimmage performance put Hinson in a good mood. He hopped up on a bench, a foot or so off the ground, for a Saturday afternoon photo.
“It’s good to still get to be an athlete once in a while,” Hinson said with a laugh.
Why is Hinson bouncing around?
Start with senior Lewis McCormick.
A rangy, 6-foot-4, 260-pound tackle, he’s started 33 games for the Indians and has been a fixture in the lineup since he was a redshirt freshman.
“Every year he’s gotten better,” Hinson said. “Just a really good athlete.”
McCormick was a second team pick on the All-South Atlantic Conference preseason team.
“With as many guys as we have back, we already know the playbook,” McCormick said. “We know how the programs runs, so we can take on more leadership and help out the young guys.”
Senior Tim Buck (280 pounds) has started 27 games in his career and has played everywhere on the o-line. He’s shifting from left guard to center to replace the graduated Taylor Fender.
“We’re looking to Buck to be a leader and he should have a great season,” Hinson said.
Buck agrees with McCormick that there’s no substitute for experience.
“We’ll have the best offensive line since I’ve been here,” he said. “We’ve all grown up together on the o-line and we’ve got two running backs capable of 1,000-yard seasons.”
Tim Pangburn is a familiar face, although his body has transformed. It’s firmed up considerably since his days as an All-State lineman during West Rowan’s glory years. The 24-year-old has been around forever at Shuford Stadium, hanging in there through a standard redshirt year, plus a medical redshirt year that followed shoulder surgery.
The last three seasons, Pangburn has played in 28 games and started nine. He’s expected to open the season on Sept. 5 as the starter at right guard.
“I’ve got another chance,” Pangburn said.
Hinson is confident he’ll take that chance and run with it.
“Pangburn is a local boy, and no one loves Catawba more than he does,” Hinson said. “He knows football and he wants to do some things this year everyone can be proud of.”
Hinson was delighted to point out Pangburn is taking a ballroom dancing class that theoretically will enhance his nimbleness.
“I was pretty much MVP of the first class,” Pangburn said sheepishly. “I learned the foxtrot.”
T.J. Olsen is expected to be the starter at right tackle. He’s another veteran and served as the right guard last season. The junior has started 18 games the past two seasons.
Catawba lost another returning starter, Brandon Floyd, to an injury in the spring. The silver lining is there’s a talented candidate to fill the vacancy. Quinzavious Sands (280 pounds) is a redshirt freshman from Georgia that everyone is raving about.
“Nasty” was the one-word adjective both Sheehan and Hinson used to describe Sands.
“He’s nice as anyone off the field and he’s got an award-winning smile,” Hinson said. “But on the field, he’s mean, and he’s a finisher. He finishes every block.”
Senior Mark Covert provides experienced depth at center and guard. Experienced depth is luxury that’s been rare in recent seasons.
“We still need to find another guard and a third tackle,” Hinson said. “But we are in a lot better shape than we’ve been.”
The theme all month has been that Catawba’s offense has a chance to be special.
“We’ve got experience in that offensive line, and that’s a very key spot,” Walker said. “Our running backs have the assurance that the blocking is going to be crisp and our quarterback has the assurance he’s going to have protection. No one has to worry about the offensive line. The offensive line will get us moving in the right direction.”
Walker is heading into his third season, after two 6-5 years, and it will be a surprise if the Indians don’t take a step forward.
“We feel a whole lot better about where we are now than we did in 2013,” Walker said.