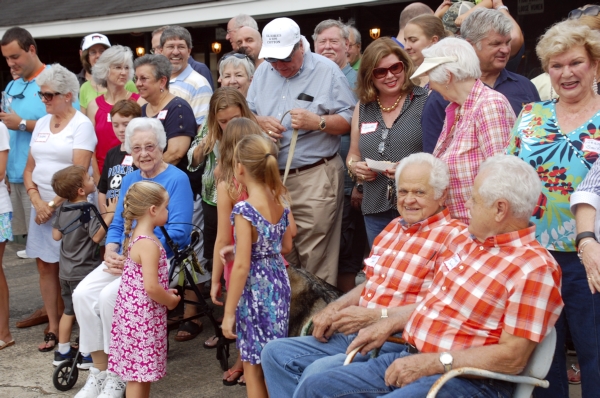 Hap and Annette Roberts, in the center, were hosts this past weekend for the Roberts Family Reunion in Salisbury. At left, Eloise Abernathy, 94, of Hickory was the oldest person attending. Twin brothers Kennett and Banner Smith came from Winston-Salem and Atlanta, respectively. Mark Wineka/Salisbury Post

SALISBURY — Hap Roberts knows how to put on a family reunion.

About a week ago, 78 members of the family descended on Salisbury from places such as New York, Virginia, South Carolina and Georgia. On the grounds of Hap’s business, Statewide Title, the reunion provided barbecue, bluegrass music, coolers full of Cheerwine, gallons of homemade banana ice cream, cornhole and lots of photo-taking and reminiscing.

Ann Parnell, one of Hap’s many cousins, couldn’t let Roberts forget the time they wrestled as children and she ended up pinning his shoulders to the ground. Hap still has a grainy black-and-white photograph of that incident and reluctantly brought it out while he was trying to organize a contest.

Tired of the yearly arguments over the best barbecue, Roberts had set up a barbecue taste-off.

He asked all the reunion participants to vote for their favorites among College Barbecue, Hendrix Barbecue and pork basted in the tradition of the old Jimmy Blackwelder’s in Salisbury. Blackwelder’s, which operated at 1624 W. Innes St. from 1948 to 1966, holds a special place in the hearts of many in the Roberts clan.

It was only a block or so from where Hap Roberts grew up. The story goes that Hap’s dad, Harold, talked to the cooks at Blackwelder’s during their breaks and coaxed out of them the basting ingredients for their barbecue.

Harold then turned that information over to Hap’s uncle Clyde Roberts, who made his best attempt at deciding what the portions should be. Hap Roberts said his family has used the recipe his father and Uncle Clyde came up with for more than 50 years.

“Every time I’ve barbecued using this recipe,” Roberts said,  “without exception, it evokes fond memories of Salisbury, distant relatives and family reunions. Barbecue just doesn’t get any better than that.”

As is a Roberts reunion tradition, the musicians in the family — led by 87-year-old twin brothers Banner and Kennett Smith — played bluegrass after everyone enjoyed their barbecue dinner. Hap also made sure everybody went home with a specially prepared Statewide Title goody bag, which included the Jimmy Blackwelder-inspired basting recipe along with directions for making “hot slaw.”

Also inside the canvas tote bag were paperweight reproductions of cotton bales that H.K. (Hugh Kerr) Roberts, Hap’s grandfather, used to give out to customers. H.K. Roberts & Sons was a cotton broker in Salisbury during the 1940s, ’50s and ’60s. Hap says his grandfather’s company bought cotton and cotton futures around the world and sold to textile mills throughout the South.

The bag contained an old business card of H.K. Roberts, whom the grandchildren called “Papa.”  On the card, the telephone number for the business was only three digits.

In addition, the bag contained a sheet of information, with user name and password provided, on how family members could look up links to their ancestors on the www.hkroberts.com website.

Hugh Kerr Roberts’ grandfather, who had the same name, served in the 14th N.C. Infantry during the Civil War, and he was captured Sept. 19, 1864, by Gen. Philip Sheridan’s men at the third battle of Winchester. It was three days before Roberts’ 43rd birthday.

The Civil War-era Roberts was sent to a prisoner-of-war camp at Point Lookout, Md., where Hap’s researcher says the survival ratio was worse than the notorious Andersonville Prison in Georgia. He made it, however, and was part of a prisoner exchange at Cox’s Landing on the James River in Virginia on Feb. 14, 1865.

The released prisoner’s son, Jasper Roberts, served in the 2nd N.C. Junior Reserves, a unit that fought against Gen. William T. Sherman’s army at Bentonville in March 1865. Jasper, 19 at the time, also survived the fighting and Jasper’s oldest son — Hap’s grandfather — was born in 1874.

The Marilyn Monroe connection to the Roberts family is an interesting one. Ralph Roberts, one of Hap’s uncles, was Monroe’s masseur and a close friend and confidant of the screen star. She knew all about Salisbury from the stories she heard from Ralph Roberts.

The modern-day Roberts reunion still traces everything back to  H.K. “Papa” Roberts and his wife, Lula, who had 10 children. Their children were Vera, Edna, Mabel, Wilbur, Clyde, Harold, Carl, Ralph, Walter and Claude. It’s now left to all of children of those 10 — the cousins — to serve as the backbone for the annual reunion.

Eloise Abernathy of Hickory was the oldest cousin in attendance. She’s 94 and was Vera’s daughter.

Banner and Kennett Smith are actually cousins-in-law. Banner married Mabel’s daughter, Jean, so he and Kennett became sort of a package deal at the reunions.

The Smith twins started playing music when they were 10. Kennett heard an advertisement on a country radio station from a man offering to give banjo lessons for $1 an hour. His mother agreed, and the instructor taught Banner the guitar at the same $1-an-hour rate.

Together, the twins had about 10 lessons, the last of their formal music instruction. Banner said he later picked up a lot of things from different musician friends in the Air Force. Their brother Will, now deceased, also learned to play the mandolin, so the family had a good start to a bluegrass band.

Though they grew up in Charlotte, the Smiths spent much of their summers at their mother’s home in Mount Airy, where they became infatuated with mountain music, or old-time bluegrass. They started playing at church functions, barn dances and at family gatherings.

Banner said in those days before television, they were the entertainment. He started keeping a book of old-time songs when he was a teenager and still brings it out on occasion. Banner and Kennett also learned the harmonica. Banner laughed, telling the story of  how he was in a barracks in San Antonio once, fresh from joining the Air Force several weeks after Kennett, and he heard a harmonica playing.

It was his brother.

Kennett met his wife, Margie, while stationed in Oklahoma. After the service, Banner attended school at N.C. State, while Kennett went to both Davidson and the University of Tennessee.

They were telephone men, telegraph and radio operators. Banner and Jean met for the first time at First United Methodist Church in Salisbury while he was working for the railroad in Spencer. They also would see each other at Rowan Dairy, which was located on West Innes Street close to Jean’s house.

“It was just destiny, I guess,” Jean said.

Their music became a pastime as they raised families, lived in various locations and built careers. The twin brothers and their families kept in touch and became an integral part of the Roberts family reunions. At the family gatherings, Banner and Kennett are joined in the music playing by their sons and grandsons.

“It’s a big deal to play with him when they get together,” Melinda Knowles of Raleigh said, talking about when Banner sees his brother again. “When you put that instrument in their hands, they are right back on it.”

Banner and Kennett have always disputed who is older. Kennett said he resolved that matter years ago when he wrote off to Raleigh and requested a record of their births. The documents that came back showed he was born 15 minutes before Banner, Kennett said.

Banner still doesn’t buy it. He said his father always told him he was born first. “I got my daddy’s word on it,” Banner said.

These are the kinds of disputes, along with arguments over barbecue, that might crop up at any family reunion.