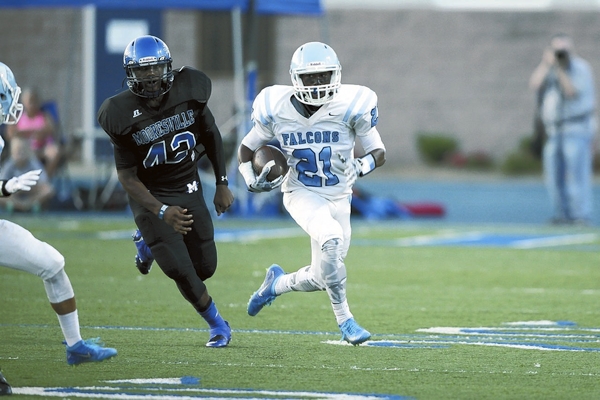 james sipes/for the salisbury post J.T. Sanders makes a cut and heads for the end zone as he returns a kickoff 82 yards for a touchdown against Mooresville. Mooresville’s De’andre Norris gives chase.

MOORESVILLE — West Rowan may be really good by the end of the season, but it wasn’t good enough Friday night.

The Falcons were penalized 13 times, played way too much defense and dropped their season-opener, 28-26, at Mooresville.

“We’re not in this for moral victories,” new coach Joe Nixon said after his West debut was foiled. “The kids tried to grind, but I wish we could have made a couple of plays here and there. I’d much rather come out on the winning end.”

West’s fate was sealed with a miss. Although they relinquished a 20-7 second-quarter lead, the Falcons drew within two points when quarterback Kacey Otto scored on a 4-yard power dive to the left side with just 30.7 seconds remaining. But on the ensuing two-point conversion attempt, his pass to the right corner of the end zone narrowly missed the extended arms of junior Kortez Weeks.

“One foot,” Weeks reported. “That’s how close that play was. I tried to dive for it. I stretched my arms. But I just came up short.”

Of course, there was much to like in a game that made terrible art but terrific drama. Weeks caught touchdown passes from Otto and sophomore backup Bryant Young. Defensive back J.T. Sanders intercepted a pass just two minutes after returning a kickoff 82 yards for a touchdown. And while the West defense was unable to shackle Mooresville’s damn-the-torpedoes running game, it did limit senior quarterback Caleb Lloyd-Klucking to four completions for 69 yards.

“West Rowan came at us incredibly hard,” said the 6-foot-2 signal-caller — a senior with an offer from Davidson in his back pocket. “Fortunately, we were in a little better condition. All those 100-yard runs on this 110-degree turf paid off. Conditioning won this game for us.”

He’s got a point. At least four West players were treated for cramps in the second half, when Mooresville racked up 182 of its 285 yards rushing. “We could have beaten them,” Sanders said afterward. “But once their running game got going, you could tell we weren’t conditioned right. That won’t happen again.”

The chief beneficiary was Mooresville junior Jetton Donshel, a ricochet runner who routinely turned two-yard stuffs into eight-yard bursts. “They were a pretty good football team,” Nixon said. “They were able to run the ball. We left our defense on the field all night long. Really, we’ve got to do a better job getting first downs and sustaining drives on offense.”

The Falcons answered with three consecutive scores, beginning with Sanders’ highlight-reel return on the subsequent kickoff. Then, on the last play of first quarter, Young lobbed a 37-yard touchdown pass to Weeks, who shucked a defender and drifted into open space on the left side. “My coach told me to get in the end zone and get open,” Weeks said. “I did and (Young) came up with a big play.”

Otto capped a nine-play scoring drive and gave West a two-touchdown edge when he connected with Weeks on a 14-yard slant pass for a TD with less than a minute remaining in the half. Only 4.1 seconds hung on the clock when Mooresvile pulled within 20-14 on a Lloyd-Klucking scoring pass to Jonathan Knox.

“Up 20-7, we really thought we had it,” said West running back Jovon Quarles, who had a couple of long runs nullified by holding penalties. “We were doing good until we started slacking in the second half.  We made some mistakes tonight, but I guarantee it will be fixed next game.”

It came down to an oh-so-close conversion play in the game’s final minute. “That’s a play we rep all the time in practice,” Nixon said. “We felt good about the call. They were in man coverage, we had what we wanted. They just made a play and we didn’t.”