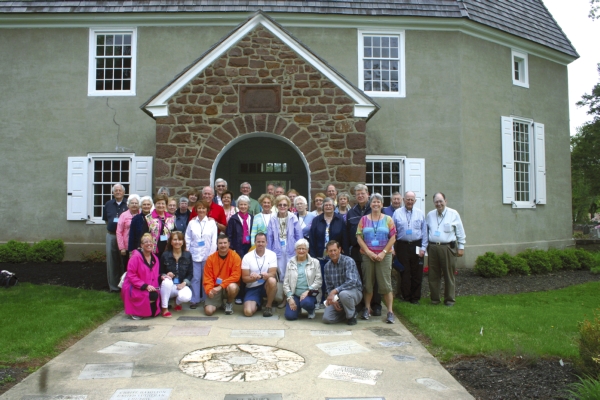 The St. John's tour group in front of the Old Trappe Church in Trappe, Pa.

Every Sunday, I look at the banner from my congregation’s 250th anniversary. 1747 to 1997, it reads. Then I think about how old I’ll be in 2047 … then I quickly think about something else. Like how long Lutherans have been in Rowan County.

I always thought God put us here on the eighth day. Turns out I was wrong. Lutherans in our area can trace our roots from Pennsylvania — thus the reason for a Lutheran Heritage tour some three dozen members and friends from St. John’s Lutheran took this spring.

It was fascinating on so many levels. One of the most exciting parts was learning about Lutherans in the early days of America.

Henry Muhlenberg, it turns out, is the father of Lutheranism in America. As our tour bus wound its way through the beautiful Shenandoah Valley, our tour-guide-slash-pastor, Rhodes Woolly, told us all about our forebears.

Samuel Schumer, like Muhlenberg, wanted to combine three Synods in the early 1800s into one national Synod. The Synod is the Lutheran church’s collection of state or regional churches. Today, there are some 65 Synods in the Evangelical Lutheran Church in America, and the North Carolina Synod was formed in 1803 at St. John’s. It’s now headquartered in Salisbury. But in 1822, the General Synod was formed. The next year, Pennsylvania withdrew. In 1826, Gettysburg Seminary was formed, so great changes were taking place around this time period.

Even earlier, Lutherans had already made their way South.

Muhlenberg had served in Savannah from 1708 to 1710, before heading back to Philadelphia by boat. In 1743, he founded the Old Trappe Church in Trappe, Pa., one of the stops on our tour.

Muhlenberg and his wife had 11 children, seven of whom survived. They’re an impressive family that includes Peter Muhlenburg, a pastor and Revolutionary War hero later elected to Congress. He helped form the 8th Virginia Regiment per instructions from General Washington.

The story goes that during a sermon one Sunday morning, Peter Muhlenberg read from Ecclesiastes, and when he finished the verse “a time of war, and a time of peace,” he said, “And this is a time of war,” opening his robes to reveal a uniform beneath.

Having been to many worship planning meetings at St. John’s, oh how I wished I’d been able to sit in on THAT meeting. We drove by a statue depicting that very scene, but I didn’t get to jump out and take a photograph. Dang.

Peter Muhlenburg’s father was wanted as a traitor, and had to hide during the war. Another Muhlenberg son, Frederick, was also a pastor and politician, and Henry Jr. was a pastor, too.

Pastor Rhodes is particularly proud of the Shenandoah Valley and its history. Before coming to St. John’s, he served Bethel Lutheran Church in Winchester, Va., for 10 years. He told us that Winchester changed hands numerous times during the war, and is considered the “crown” of the Shenandoah Valley. For all you country music fans, it was also the home to Patsy Cline.

Of course we stopped at Bethel and met its current pastor, David Young, whose father served as a pastor in Rowan County. Bethel calls itself the Apple Capital of the World, and we also made a stop nearby at the Virginia Farm Market.

After the Civil War, the first unification of a national church was attempted in 1918, with the formation of the United Lutheran Church. The organization went through numerous iterations to form the Evangelical Lutheran Church in America in 1988.

I’ve written earlier this summer about our stop in Gettysburg, and how the Gettysburg Seminary played such a pivotal role in that battle. The Lutheran Seminary at Gettysburg is one of eight throughout the United States, and although I’m more familiar with our seminary in Columbia — because of its close proximity — it was wonderful to be able to learn more about Gettysburg Seminary. It is the oldest in the nation. One of St. John’s former pastors, the Rev. Dr. Marty Stevens, serves there as an associate professor, and she gave us a warm welcome when we arrived just before the noon chapel service.

The third morning of our trip we spent in the Amish country of Lancaster County. It was an eye-opening look at a group of people determined to maintain the simple life. That afternoon, it was on to Trinity Lutheran in Lancaster, Pa., formed in 1730. The four original statues representing the four Gospel writers can be found in the narthex. You can spy their replacements high on corners of the bell tower.

The next day, it was on to Trappe, Pa., where we visited Augustus Lutheran Church, also called Old Trappe Church. Henry Muhlenburg founded this church, and is buried just outside the church walls. A sign in the churchyard signifies this place at the Shrine of American Lutheranism. It was indeed special for Pastor Rhodes, Pastor David Nelson, and Pastor Ed Harper to stand at the pulpit where Muhlenburg preached.

This congregation was founded in 1743. The church —which built a new sanctuary in the 19th century — holds worship services there in the summer at 8 a.m. and every Christmas Eve. There’s still no heat in the building, so hardy worshippers dress in coats and scarves and gloves and hats.

Augustus Franck was one of one Muhlenburg’s mentors, and the church is named for him. Other churches in which Muhlenburg had a hand have their names embedded in stones in the front walk. We saw the stone for Organ Lutheran, formed in 1745, our county’s oldest Lutheran church.

Our last church stop was on the last morning of our trip, to tiny Hebron Lutheran Church in Madison, Va. Founded in 1740, it is the oldest church in continuous use in Virginia. Patty Covington is its pastor, and her daughter, Ruthie, is a member of St. John’s Salisbury. Pastor Rhodes was Ruthie’s youth director back in the day.

Patty, a second-career pastor, showed us around the lovely church, accompanied by Bodhi, her constant canine companion. Her congregation consists of local folks and government retirees who have relocated to this bucolic setting, she said.

To conclude our trip, we held a brief worship service is this lovely space.

“Though our trip, we’ve had great conversations about those who wanted to share their brand of faith,” he said. “All of us have a greater appreciation of our Lutheran heritage.”

Pastor Rhodes read from Ecclesiastes, including the fateful line that had so moved Peter Muhlenburg.

He continued, speaking particularly to our older members who had come along on this journey. “What God has done endures, and it endures through you. I hope you see that as part of your legacy. I’m so very thankful that St. John’s can look to you with great confidence. Help us see what we don’t see.”

Together, we sang the final lines of “Blessed Assurance.”

This is my story this is my song, praising my savior all the day long.