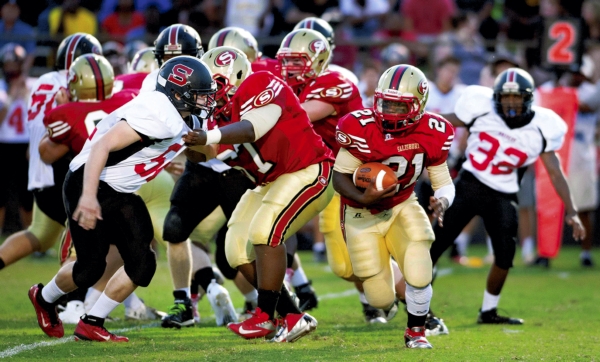 SALISBURY — The Salisbury Hornets hit a few speed bumps in their season opener Friday night but their defensive unit put on a pass rushing clinic that frustrated South Rowan and all but assured a 35-20 win.

Salisbury’s defense got to Raider quarterback Heath Barringer for 12 sacks in the game and added an interception and three fumble recoveries for good measure to set the tone for the game. Senior linebacker DJ Alexander led the sack attack with five while tackle NaQuay Simpson had two and linebacker Deandre Snowden had back-to-back sacks late in the 4th quarter to stuff the final Raider scoring attempt.

“Our coaches strongly stressed the quarterback tonight,” said the 6-3, 215-pound Alexander. “He’s (Barringer) a really good player, so we basically put on our big boy pants and went after him. We just didn’t want him to get free.”

Barringer, a 6-foot, 185-pound senior, admitted to some tender ribs and a tight back after the game but felt there were bright spots for his Raider offense. “We wanted to establish our run first to open up our play-action,” he said, “but we just could not get the run going. But we had some real positives and it is something to build on.”

Salisbury (1-0) broke out to a two touchdown lead in the first quarter, thanks to their defense and their special teams. Jaylen McDowell picked off a pass over the middle and returned it 32 yards to the Raider 13. Two plays later, senior Antwond Glenn scored from the seven to make it 7-0 with 3 minutes left in the first. South then went three and out leading to a booming 60-yard punt by their talented senior Marshall Long. But, Salisbury’s Shaquez Strickland woke up the crowd with a dazzling 70-yard return of the kick to quickly make it 14-0.

Barringer led the Raiders right back as the second quarter opened when he connected a 56-yard screen pass with receiver Marquis Rhyne to the Salisbury 15. The Hornets’ defense stopped the threat as South settled for a 31-yard field goal from Brennan Lambert to make it 14-3.

The golden toe of Lambert came right back into play on the next series after Salisbury fumbled and South’s Daniel Coats recovered at the Hornets’ 35. But the defense held again and forced Lambert to try a 50-yard field goal. The distance was no problem for the senior booter as the ball cleared the uprights by at least 15 yards. Suddenly, with 6:19 left in the half, Salisbury’s lead was just 14-6.

“Our defense is just going to have to step up for us in situations like that,” Salisbury coach Ryan Crowder said after holding the Raiders to the field goals. “I challenged them to just take pride in stopping them,” he said. “Wherever the ball is spotted, just stop them.” Except for a couple of big plays by Barringer, the Salisbury defense did just that for their coach.

“We are a triple option team, but we just were never able to get the triple established tonight,” said brand new Raider head coach Daniel Yow. “Salisbury did a great job of not letting us pull and pitch and get to the edge. But, our kids played their hearts out and there were a lot of positives. We will just get back to work Monday and try to get better.”

The final minute of the first half produced the most offensive excitement of the night for both teams. Salisbury got to Barringer on a sack by Simpson, knocking the ball loose. Tywun Rivens scooped it up for the Hornets and ran it 20 yards to the South 25. Harrison Smith came in for starting quarterback Marcus Corry and led a quick scoring drive. Smith finished it with a one-yard run to put Salisbury up 21-6 at 1:08 of the second quarter.

South (0-1) put their best offensive drive of the night just before halftime to keep the game close. First, Barringer scrambled out of the pocket and broke free for 30 yards to the Hornets’ 42. Two plays later, he found junior receiver Austin Chrismon open on the left side that turned into an uplifting 47-yard score to make it 21-13 at the half.

The Hornets decided to use the running of their twin backs Glenn and Willie Clark plus Corry to chew up yardage and the clock in the second half. The strategy seemed to work as they drove 69 yards in nine plays, capped by Clark’s six-yard run early in the fourth quarter, making it 28-13. The Hornet defense then held South on downs but Salisbury gave it right back when a short pass over the middle by Corry was intercepted by Darius Jackson at midfield. Six plays later, including a clutch fourth-down conversion pass to Chrismon, South made it 28-20 with 6:56 left on Barringer’s 1-yard sneak.

Salisbury wisely stayed on the ground the rest of the way and used most of the clock with two good drives at the end. The clincher came with 3:21 left when running back Juan Fair raced up the gut from 13 yards to make the score 35-20. Kicker Matt Woolly was a perfect five for five on PAT tries. The Hornet ground game produced 252 net yards, led by Clark and Glenn with identical performances of 13 carries for 94 yards and one TD each.

By Mike London mike.london@salisburypost.com GRANITE QUARRY — It helps having a high jump state champion in the defensive backfield, and... read more