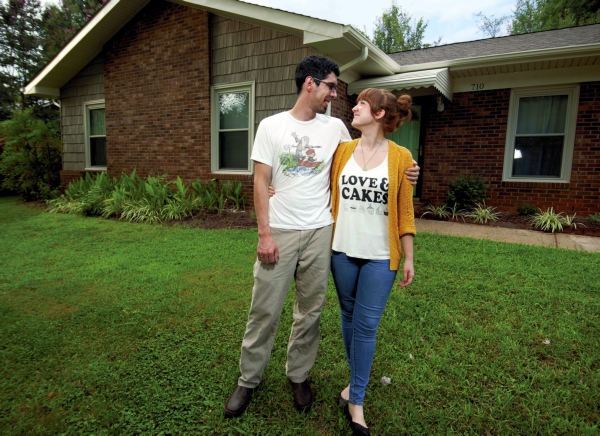 JON C. LAKEY / SALISBURY POST Randall and Caroline Boone's quest for a home will be featured on the HGTV's House Hunters that is set to air this weekend.

‘House Hunters’ segment will be on TV Sunday night

Randall and Carol Boone experienced a honeymoon surprise few if any other people can claim.

After their wedding last Oct. 18, the brand new husband and wife were in St. Maartin when Carol got an email from the “House Hunters” program on HGTV. Were she and Randall still looking for a house?

Carol had applied online a month earlier to be on the show, which follows prospective home buyers and their agents through the process of choosing a home.

“We had been debating on whether we should continue to rent,” Carol says. Their immediate plan was to live in the condo Randall rented in Wiltshire Village, but they had started looking for their own place.

Carol had forgotten all about “House Hunters,” though, after going weeks without any response. Their answer to the email was yes, and the adventure soon began.

First, a little backstory. Carol, whose maiden name is Holmes, has lived in Salisbury 20 years and graduated from Salisbury High in 2004. She met Randall, who was living in Fort Worth, Texas, through christiandatingforfree.com.

They almost missed each other. After being on the dating site for awhile, one day Carol decided she was going to delete her profile when she got home. Across the country in Texas, Randall had planned to write to her that very evening but decided to reach out on his lunch break instead.

Randall moved to Salisbury in September 2013 and went to work for Delhaize in information technology. Carol, who attended Bible college and then spent two years at Johnson & Wales, was a baker at L.A. Murph for nine years.

By the time “House Hunters” came to call, she had burned out on baking and gone back to school — this time to study photography while working as an assistant with photographer Jenny Tenney. Still, Carol was ready to have her own kitchen.

A phone interview followed the email. At the show’s request, the Boones submitted a 20-minute video of themselves explaining what they were looking for in a home. Finally, they were chosen from a pool of candidates.

The episode about their search is slated to air at 11 p.m. Sunday on HGTV.

The couple, both 29, worked with Cathy Griffin of Century 21 Town & Country. The first thing Griffin and the Boones will tell you about the experience is that the filming process is much more involved than what appears on TV.

The hunt included only three houses, but they worked with the film crew eight hours a day for six days last January-February to come up with 22 minutes of programming.

“Grueling,” Griffin says. “I will not give up my day job.”

The crew also filmed Carol and Randall at some of their favorite downtown hangouts — Koco Java coffee shop, Griffin Guitars and Spanky’s, where they announced which house they were buying and why.

The crew even took footage of them practicing with their praise team from Destiny City, a small church that meets at Livingstone College.

“It was really cool to see how they create the show,” Carol says.

Randall says the experience was fun but exhausting. The crew wanted to get the first reaction when he and Carol walked into each room, he says. Retakes required them to try to muster the same reaction over and over, though, and then shots had to be taken from different angles.

So much for reality television. “It’s eye-opening,” Randall says.

He is both excited about seeing the show and dreading it. “I hope it looks good.”

Concerned that the TV show might bring strangers to their door, the Boones prefer to say only that their new home is near Fulton Heights.

They chose the house because it was move-in ready, Carol says.  One of the other houses they looked at was 100 years old and “gorgeous,” but would require a lot of work, she says. The other was a ranch-style house built in the ’60s or ’70s that needed updating.

The three-bedroom rancher they chose had just been remodeled.

“Being a newly married couple, we didn’t want a big renovation to come between us,” Carol says.

It may have been Randall’s practicality, though, that tilted the scales. He says Carol wanted the historic home, but he didn’t want to tackle that project. “It was more my choice,” he says, and then he convinced her.

Carol and Randall are not sure what to expect after the show — if people will recognize them around town or life will go on as if nothing happened. Carol says she could tell when they were filming at Coco Java that people took pictures of them with their phones while pretending not to. “That was kind of weird.”

A friend is having a viewing party for them Sunday night when the show airs at 11 p.m. and again at 2 a.m. The episode, titled “Tight Budget in Salisbury NC,” might be more a dose of reality than many “House Hunters” segments. The Boones’ price range was $80,000 to $100,000, considerably less than you’ll see on “Young Family Seeks First Home in Oahu” or “Seeking Swiss Chalet in Lake Tahoe.”

That’s OK. After the bustle of Fort Worth, Randall likes the small town atmosphere of Salisbury. Getting to work just five minutes after leaving his house suits him fine.

After living with parents and then apartment complexes, he’s glad he and Carol have a house of their own. It’s been a learning experience, with or without “House Hunters.”

He expected mortgage payments. He knew a house would be a responsibility. But he has come across one aspect that he hadn’t really appreciated before:  “I have to do all the yard work.”

Last week’s rain storms didn’t do much for drought