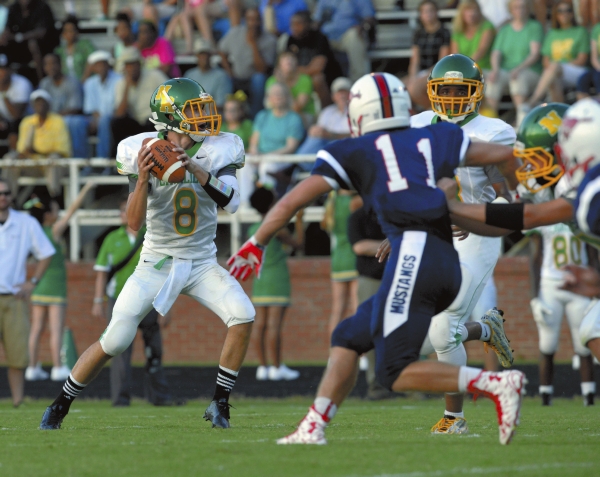 GRANITE QUARRY — It helps having a high jump state champion in the defensive backfield, and North Rowan’s Michael Streater bounded into the sky for the interception that clinched Friday night’s wild 24-20 victory at East Rowan.
“I was kinda nervous, but I read the route and got a good break on that ball,” Streater said. “I just didn’t want to lose.”
No one did. It was a fiercely contested game for opening night.
The Cavaliers were in major trouble, but they reclaimed the lead with 3:42 remaining when Malik Alford fought his way into the end zone from the 1-yard line. Then the Cavaliers held on with late picks by Keith Carroll and Streater to give coach Ben Hampton his first victory.
“We showed our youth with a lot of mistakes, but somehow we got it done,” Hampton said. “We went from the high of being ahead, 14-0, to the low of being behind, but when we had to have a drive, we put a drive together.”
North’s defense controlled the game early and the Cavaliers seized a 14-0 first-quarter lead on Corbin Smith’s touchdown pass to Desmond Gray and a scoring run by Jaleel Webster. Smith entered the game at quarterback early when starter Josh Ellis sustained a wrist injury.
East finally got on the board on Tate Houpe’s TD pass to Naquis Caldwell five minutes before halftime, but Jacob Young’s 37-yard field goal allowed the Cavaliers to take a 17-7 lead at the half.
North workhorse Xavier Halley had 98 rushing yards by halftime, but the Mustangs regrouped offensively and defensively during the break, and the home team owned most of the second half.
“That’s a very good team we were able to win against,” Hampton said. “They’ve got lots of weapons on offense and they’re very physical on defense.”
Hunter L’Hommedieu, Josh Beaver and Wesley Porter were standouts for East’s defense. L’Hommedieu forced a fumble and recovered one. Bryson Collins made an interception.
Javin Goodine picked off a pass for the Cavaliers early in the second half, but Max Wall broke a 34-yard scoring run for East that swung momentum. Then Houpe found Caldwell for a 51-yard strike for the score that put the Mustangs ahead for the first time at 20-17 late in the third quarter.
“I caught that ball and there was nothing but green grass in front of me,” Caldwell said.
Houpe was injured (it’s not expected to be long-term). That limited the Mustangs’ offense in the fourth quarter, but their defense dug in.
The moment of truth arrived with the Cavaliers, still down three points, facing fourth-and-2 at the North 47 with the clock ticking toward the 5-minute mark.
Ellis, a sophomore, was back in leading that make-or-break drive. Webster got the ball on fourth down — and churned for the chains. He got three yards, moving the ball to midfield.
“I’m in a big role for a sophomore, but I knew I had to lead my team,” Ellis said. “Webster made a great run for that first down. He kept his head down and his feet driving.”
Then Haley, quiet the whole second half, burst up the middle for 38 yards, taking the ball to the East 12.
“I just couldn’t find any holes in the second half until that one big play,” Haley said. “But the coaches were still pumping me up and telling me they believed in me. Then I saw open field, and there was nothing I could do but try to score.”
Porter prevented him from scoring, but the Cavaliers kept pounding. First Ellis, then Haley, then Alford.
“Our offensive line was tired,” Ellis said. “But they were making holes, and we got the score we needed. I thought they had Alford stopped short of the end zone, but he just kept driving.”
North still needed two stops late, but Wall, a halfback who was taking direct snaps with Houpe hurt, was picked off by Carroll — and then by Streater.
“We had our positives, but we also had a lot of negatives and we left at least 21 points on the field,” McClamrock said. “But you have to give North Rowan credit. When it looked like we had all the momentum, they kept fighting back.”