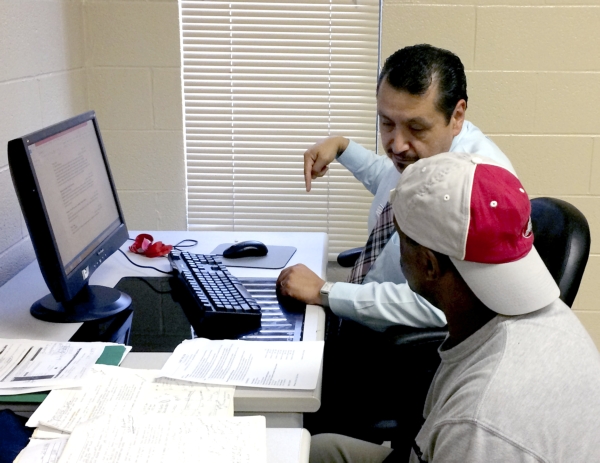 Cus Vanegas helps Larry Miller create separate resumés for different types of jobs he's interested in pursuing during a recent employment workshop. Agencies who helped put on the workshop have organized a job fair to be held Tuesday at Salisbury Civic Center. Jeanie Groh/Salisbury Post

Next week, employers will come out in droves to the Salisbury Civic Center in hopes of filling 300 vacant positions in the community.

On Thursday, dozens of jobseekers attended an employment workshop to better prepare themselves for the upcoming job fair.

Initially, there were only plans for a job fair, but then organizers decided they needed to “give them (the community) some tools” to be better prepared for those positions, said Kenny Hardin, who was on the organizational committee.

He added that “there’s no excuse” for people not to come to the workshop because free bus fare and free childcare were provided for participants.

In the interview skills seminar, they talked about the best ways to ace an interview.

Director of the Rowan-Salisbury School System’s human relations department, Kristi Rhone, led the communication and personality seminar, in which she talked about the personality traits employers look for in a potential employee.

In the resumé workshop, volunteers helped individuals build – or rebuild – resumés. They patiently walked attendees through formatting and helped them pick the best wording for the documents.

Larry Miller said he found out about the employment workshops through an advertisement in the Salisbury Post. He said he plans to attend the job fair, so he wanted to come to the workshop to increase his chances of getting a job.

He started the afternoon with the interview skills session.

Miller has experience both as a machine operator, forklift driver and as a cook.

Because he wants to look for jobs in both fields, he decided to separate his resumé into two separate resumés.

“I have one for one field and one for the other,” Miller said.

Miller said he plans to come to the job fair and added that he feels like he’s “better skilled and prepared” because he came to the workshop.

The workshop was held at Miller Recreation Center, in the 1400 block of West Bank Street.

“This is where the people live,” said planning committee member Kenny Hardin. He added that it was important to have activities where people who need them most are located.