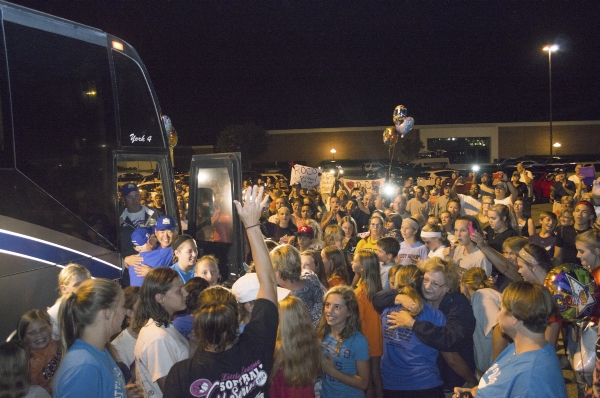 Josh Bergeron / Salisbury Post - A huge crowd of people greet the Rowan County Little League Softball Team as it pulls into the parking lot of the former Salisbury Mall.

More than 200 people greeted the Rowan County Little League softball team on Thursday night as they arrived home from winning the World Series in Portland, Ore.

The crowd of people, toting congratulatory signs, met the players and coaches in the parking lot of the former Salisbury Mall. A parade of law enforcement officers had escorted the team from the Rowan County line, through downtown Salisbury and to the former mall. A separate group gathered in downtown Salisbury to wave at the procession as it passed through.

As soon as the the bus came into view at the former mall, the crowd rushed closer to get a view of the team. The crowd quickly circled the bus and began cheering.

“Everybody is tired, but everybody is running on adrenaline and energy from all this excitement,” Yang said. “I told the girls that for the next month or so, they’re gonna be celebrities in high demand.”

Thursday’s gathering was the first of two planned events for the softball team. On Saturday, supporters have organized a parade through downtown Salisbury.

The parade is scheduled to begin at 10 a.m. Saturday at Richard’s Barbecue, 522 N. Main St.