Rowan-Salisbury names teacher and principal of the year 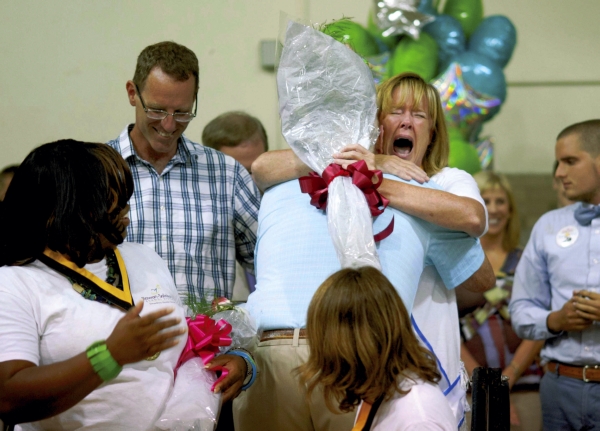 JON C. LAKEY / SALISBURY POST Millbridge Elementary's Nancy Goodnight reacts to seeing her father Bob Howard after she was named the 2015-16 Teach of the Year. Rowan Salisbury Schools staff held their Back To School Pep Rally in Goodman gymnasium on the Catawba College campus. Several awards and prizes were handed out, Teacher of the Year, Principal of the Year and many others. Thursday, August 20, 2015, in Salisbury, N.C.

Goodnight is going into her 10th year as a teacher, and has previously taught at Enochville, Woodleaf and China Grove elementary schools. She currently teaches gifted fifth grade at Millbridge Elementary School.

When she first started teaching Academically or Intellectually Gifted (AIG) students, she could only pull them out for an hour a day. She didn’t feel like she had enough time to fully challenge them.

So, Goodnight piloted an AIG homeroom class, where she has gifted students all day.

“It teaches all subjects to them,” she said. “I do everything with them.”

“It’s a chance for those high fliers to be immersed in a rigorous environment all day,” she said.

Goodnight said the first few weeks of the school year are challenging for her students.

“They’re brain dead the first few weeks,” she said, but added that they quickly “rise to the challenge.”

Goodnight said she always knew she should be a teacher.

“I always played school,” she said.

When she went to college, however, she decided to go down a different path. Her senior year, she realized she’d made a mistake and decided she wanted to change her major. Her parents told her no.

Eleven years ago, she revisited that dream after staying home to raise her three children. She completed a teaching master’s program at the University of North Carolina at Charlotte and began teaching soon after.

“The entire staff sees how passionate she is about the job,” Smith said. “It is truly a calling.”

Dixon, one of the co-principals at Knox Middle School, has been a principal since 2008, but has just completed her first year with the district.

She said she was surprised she won the award. “I was very, very humbled.”

“I’m a big believer in teamwork,” Dixon stated, adding that she feels the award belongs to everyone at Knox Middle School.

Dixon said she strives to build relationships with all her students, not just the ones who spend a lot of time in the office.

“That’s very important to me,” she said.

“She relates so well to anybody,” Smith said. “That’s why she got recognized so quickly.”

He added that Dixon remembers details about everyone she meets, from students to teachers to fellow principals.

Smith said Dixon has a “crystal clear picture of what a truly dynamic principal should be.”

Dixon is always there with a smile, pat on the back, feedback, encouragement, constructive criticism or help when she’s needed. She says the right thing at the right time, he said.

Dixon said another priority for her and co-principal Dr. Mike Waiksnis is giving teachers the power and tools they need to succeed.

We try to “treat our teachers like professionals,” she said.

Each of Rowan-Salisbury’s 35 principals gets a say in the Principal of the Year award. They award is decided through a vote.

Rowan-Salisbury’s School Teachers of the Year