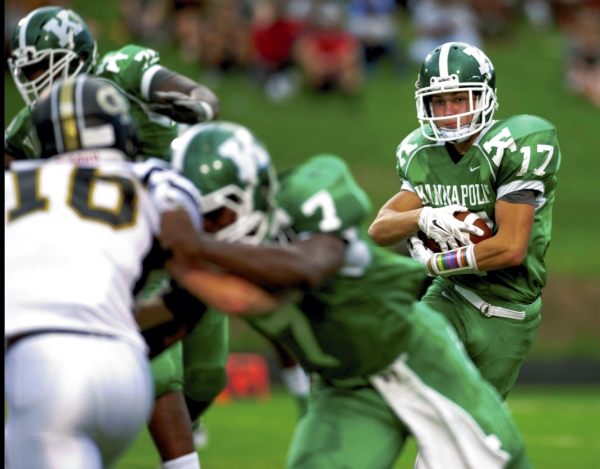 KANNAPOLIS — That ringing in A.L. Brown quarterback Damon Johnson’s ears was a noise he didn’t mind at all.

The “Victory Bell,” symbol of A.L. Brown’s ancient rivalry with Concord, was wheeled across the field on Thursday, and the town of Kannapolis celebrated its return and the music the old railroad bell was making.
“We messed up so much, and we gave Concord a lot of momentum swings,” Johnson said. “But at the end of the day, we got the Bell. We’re going to ring it every day and we’re going to ring it proudly.”
The Wonders beat Concord, 26-15, in a long, intense struggle that seemed to bring a penalty flag per minute.
“We could talk for a long time about how ugly it was,” said A.L. Brown coach Mike Newsome, who broke a three-game losing skid against the Spiders. “But there are no ugly Bell wins.”
Johnson was named the Wonders’ most outstanding player, mostly for the two pinpoint touchdown passes he fired to Dominique Washington, one on the Wonders’ opening possession and the other on the Wonders’ initial possession of the second half.
Perhaps even more astounding than Johnson’s effort was the one turned in by Jayln Cagle, the heart and soul of the Wonders’ effort. He changed the game on offense, defense and special teams.
“I kept getting the ball in open space and I was determined to make plays,” Cagle said. “I just kept telling myself they weren’t going to beat us again. There wasn’t going to be a four-peat.”
The Wonders controlled the line of scrimmage in the first half, putting serious heat on Concord quarterback Keenan Black and blowing open holes for powerful backs Cagle and Sandon McCoy. But they also coughed up three demoralizing turnovers, including one when McCoy lost the ball when he was trampling defenders like a bull in a china shop.
“We kept shooting ourselves in the foot,” Newsome said. “It was the first game, and it was just mistake after mistake after mistake.”
Concord didn’t do much offensively, but the Spiders fooled the Wonders with an old-school flea flicker and Black passed 43 yards to a leaping Hamsah Nasirildeen. His grab at the A.L. Brown one-yard line led to a TD run by Black, and the Spiders reached the break with a 7-all tie.
Johnson’s second strike to Washington — a crisp throw over the middle that connected with the rangy receiver in stride — gave the Wonders a 14-7 lead. But then the Wonders failed to execute on a punt attempt, and the Spiders used a short field to score on the final play of the third quarter to cut A.L. Brown’s lead to 14-13.
After the Wonders committed back-to-back infractions trying to block the PAT kick, the ball was moved inside the one-yard marker  and Black hammered into the end zone for a two-point conversion and a 15-14 lead.
The Wonders’ response to that one-point deficit provided most of the night’s drama. Down the field they came, refusing to take no for an answer. Johnson, scrambling for his life, dashed for exactly 12 yards on a critical third-and-12. Cagle, running people over, barreled for one of the best 11-yard runs in history on a third-and-9.
“We ran the same play six times in a row, and they never stopped it,” Johnson said.
Cagle punched in for the go-ahead score with 7:11 remaining, and after the Wonders’ defense forced a punt, Cagle roared 35 yards down the right sideline on a punt return to set up the touchdown that put his team ahead, 26-15, with 5:12 left.
There was still doubt remaining when Black steered the Spiders right down the field, but on first-and-goal at the Kannapolis seven-yard line, Black was sacked and fumbled with 4:20 left. Steven Howie’s recovery sealed victory.
“We’ve got so much confidence in our defense now,” Johnson said. “I love this team.”
The game fell well short of great in terms of execution, but a live television audience got to see the emotion this game brings out in both football-mad communities.
“We had to overcome an awful lot, but we fought and we fought,” Newsome said. “I’ve never been prouder of a team. If we can clean up a few things, we’ll be dangerous.”