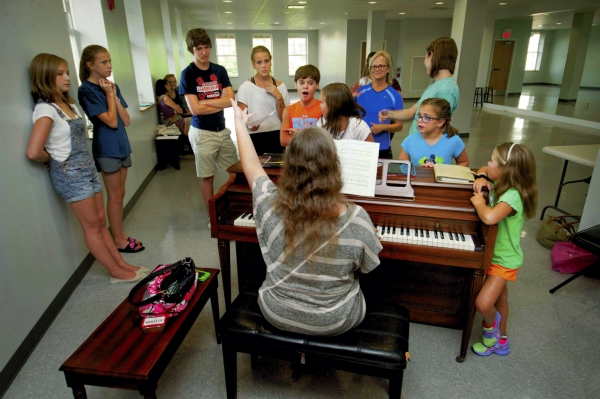 Tickets snapped up for ‘Sound of Music’ tribute Micah Cross plays the part of Kurt von Trapp. Singers and performers who will be dressed as the von Trapp family rehearse for the of 50th Anniversary Celebration of ‘The Sound of Music’ that will be held at the Meroney Theater on Friday. Jon C. Lakey/Salisbury Post

And the bells in the steeple, too.

And up in the nursery an absurd little bird

Is popping out to say “cuckoo!”

Faster than the Von Trapps dashed over the Alps, tickets for Friday’s screening of “The Sound of Music” are gone.

And lucky indeed are the 401 ticket-holders for the 50th anniversary sing-along event Friday evening at the Meroney (they’ve added some chairs to the 361-seat theater). And did we mention those tickets were free?

If you don’t plan to use your coveted ticket, Mary James would like to hear from you. James, who has been coordinating the event hosted by the Salisbury Symphony, does have a waiting list of folks who want to see the beloved musical.

Just like that clock in the hall, this project has a lot of moving parts.

Gwen Matthews, the Norvell Theater’s musical director and choreographer, is working with a cast of Norvell and Meroney veterans, who will present a program of five “Sound of Music” songs beginning at 4:45 p.m. in front of the Meroney, 213 S. Main St.

The cast had just two rehearsals — on Tuesday and Wednesday evenings of this week — meeting in the second-floor rehearsal studio at the Norvell.

Matthews worked with the children in getting the choreography just right as they lined up to sing “So Long, Farewell,” in stair-step order from youngest to oldest Von Trapp.

Matthews counted the beat for them.

The children also had to figure out which way they’d peek out behind the nuns to say “Cuckoo!” at the beginning of the song.

Before long, they had it.

Some of the children had seen the movie beforehand, but some hadn’t, Matthews said. “I told them to watch the movie and be familiar with it.”

Then it was time to come for practice.

Micah, as Kurt, is tasked with hitting the high octave in the song when he sings, “Goodbye!”

“If your voice happens to crack, let it happen,” Klaus told him. “Let it be part of the character.”

He hit it pretty well during rehearsal.

Micah recently appeared in “Tarzan,” and he was up for this challenge as well.

“This sounded like a really good show to do,” he said. He invited his sister, Maggie, to come along, and Matthews said that would be fine. Courtney and Meredith Williams are also real-life siblings.

Maggie had never seen “The Sound of Music,” but after about the fourth viewing, she was giving tips to Matthews, the choreographer said.

She may even give some tips to Dan Truhitte of Concord, who played Rolf in the original 1965 film. Truhitte will be on hand to introduce the film at 5:30 p.m., and take questions afterward at 8:45 p.m. Then it’s back out to the sidewalk, where he’ll dance with movie-goers to his signature song, “Sixteen Going on Seventeen,” accompanied by Susan Trivette on piano.

Teachers prepare for school year with Back to School Conference