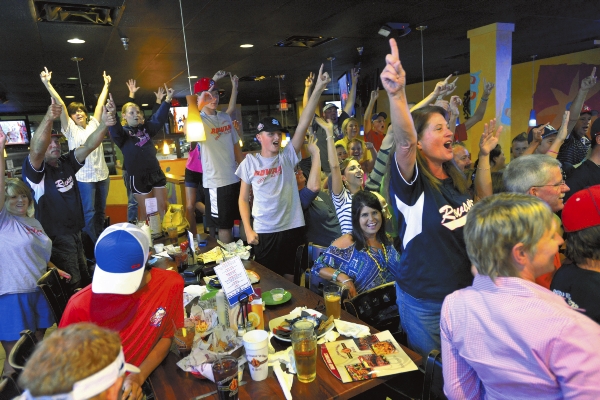 SALISBURY – If you could not be in Portland, Oregon, last night for Rowan’s Little League Softball World Series win, the next best place to be was at East Coast Wings & Grill on Faith Road.

A large and raucous contingent of Rowan Little League officials, coaches, players, friends of the team, parents and other supporters gathered at the local restaurant to celebrate what they hoped would be the crowning moment of a great postseason run for the local 11- and 12-year-old softball stars. They would not be disappointed.

After living and dying with every pitch, the group of local folks erupted with cheers, hugs, high fives and a few tears when Rowan wrapped up the Little League Softball World Series title 4-2 over Rhode Island.

“It is amazing, it’s incredible,” said John Basinger, a league official and coach in the aftermath of the World Series win. “It is the coolest thing that has ever happened around here in youth sports, period.”

The watch party at East Coast Wings initially came together Tuesday night during the semi-finals and expanded to a much larger group for last night’s championship game. Basinger, local attorney Greg Jones and East Coast Wings owner Scott Hudson made it a perfect venue for the special event.

The restaurant normally closes at 9:30 p.m., but Hudson was glad to keep the business open to accommodate the softball faithful. “This is so unique and a once-in-a-lifetime event,” Hudson said. “We are delighted to do it, and the locals here support the sports programs here in this county in an unbelievable way.”

The party went into high gear right off the bat when the Rowan team posted four runs in the top of the first inning. What began as an apparent cakewalk turned much more tense and dramatic as the innings clicked by and the Rhode Island team trimmed the lead to 4-2 in the fourth. With two outs to go in the game, an obvious missed call at first base raised the tension level even higher until the umpires got together and reversed the call. Then, just like that, the game was over and the celebration began in earnest.

A longtime supporter and leader of Little League softball in Rowan, Jeff Barnhardt, was on hand with his family to watch the game and reminisce about how it all got started just seven short years ago when the local Little League added girls’ softball.

“When we started seven years ago, we had no idea we’d be this far along, but we have grown so fast.” Barnhardt said. “These girls are just a rare breed of talent and even better character. They get along so well and play together as a team. This is just now starting to set in, what this means. It may never happen again in my lifetime.”

The local supporters were unanimous in giving credit to Rowan coaches Steve Yang and Rob Hales for bringing the team of all-stars along and getting them to the point of a world championship.

“Steve and Rob hold the line on these girls pretty well,” Jones noted. “But they also let the girls have a lot of fun and enjoy the moment.”

Basinger added that the experiences of being in Portland this week with all the corporate support, getting to meet girls from all over the world and being on national television has been special.

“They have treated these girls like queens all week,” he said. “It is an experience they will never forget.”

So with the championship in hand, the girls are expected to head back to North Carolina tomorrow to celebrate the victory with home folks and family. So how do you celebrate a World Series win?

“I think we have got to figure out as a group how to make sure these girls are recognized properly,” Basinger said, noting there would certainly be a parade and other special events including a gathering back at East Coast Wings. “We have to be sure we recognize and celebrate this win in a way that befits what they have really accomplished.”

Rowan Little League officials, parents, family, friends and the public will all have a part in the coming celebration, and it should be memorable.

But next Monday morning the world champions will still have to get up and start back to school for a new year. Undoubtedly they will be wearing their team jerseys and perhaps a medal or two.