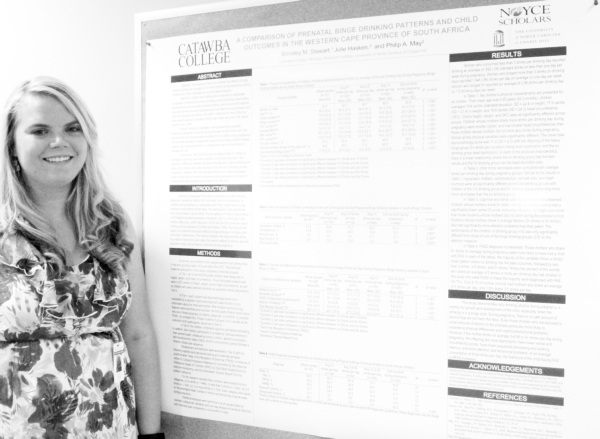 Noyce Scholar Brinsley Stewart of Boonville plans to be a math teacher after she graduates from Catawba College in May 2016, but her internship experience this summer at the University of North Carolina Chapel Hill Nutrition Research Institute in Kannapolis gave her some keen insights into just how important math and applied statistics can be in the world of research.

Stewart, a rising senior, interned under the tutelage of Dr. Philip May, a 1969 Catawba alumnus. May is a research professor for UNC at the Nutrition Research Institute, where he continues his National Institute of Health-funded research on Fetal Alcohol Spectrum Disorders.

May has conducted and overseen research on the prevalence and characteristics of Fetal Alcohol Spectrum Disorders in three communities in the U.S. and five communities in South Africa. His UNC team is now working on a growth and development study in Kannapolis and Cabarrus County.

May, along with members of his team — Julie Hasken, Julie Stegall and Heather Mastro — helped Stewart analyze some of the data that had been gathered in South Africa to get answers to two hypotheses she developed while studying and working with the research team: Do mothers who binge drink more than three or five drinks at a time have worse outcomes for their children than mothers who don’t? Do mothers in lower socio-economic conditions with deficient nutritional status suffer poorer growth and development outcomes in their children?

What Stewart found was enough to help her create two research posters that she coauthored with Hasken and May. She hopes to present them both at scientific conferences during the upcoming academic year. She also learned “just how long it takes to do research,” an insight she called, “most surprising.”

“What we tried to do is show her how standard public health research methods and biostatistics can be applied in local communities to answer important questions of international significance,” May explained. “That’s what we do and that’s what I’ve done all of my career.”

While Mastro and Stegall conduct interviews with mothers in Kannapolis and Cabarrus County and record cognitive test results on local children to accumulate more data, Hasken does most of the hands-on statistical analyses. Hasken says her work with interns like Stewart “forces me to make sure I know what I’m talking about and forces me to explain it so they can understand.”

May congratulated Stewart on the posters she co-authored and created. “She went above and beyond the call of duty by producing two posters, when only one poster is the expectation,” he said.

Catawba College received a $1.45 million grant in October 2013 from the Robert Noyce Scholarship Program of the National Science Foundation. That grant, the largest Catawba had ever received, provides five years of support for scholarships and internships that help prepare science, technology, engineering and mathematics (STEM) majors for teaching careers.

The Noyce grant will ultimately provide paid internships for up to 60 freshman and sophomore students at Rowan-Cabarrus Community College to experience teaching and to recruit them to pursue a career in K-12 education. Eighteen upperclassmen, including Brinsley Stewart, who pursue a major in a STEM discipline and licensure in teaching at Catawba College will receive $18,000 scholarships in their junior and senior years of college.

Following graduation, these Noyce Scholars will be required to work for four years in a high-need school district as a condition of receiving the scholarship. During this time, they will receive funds to attend a state STEM education conference and to buy classroom supplies.

The NSF grant is directed by Dr. Connie Rogers-Lowery, associate professor and chair of biology at Catawba. The grant period began Oct. 1, 2012, and expires Sept. 30, 2017.