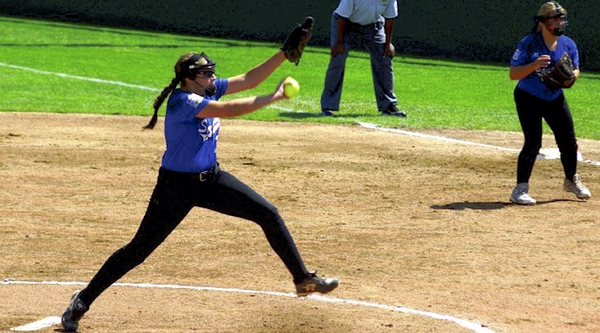 Rowan pitcher Kali Morton blew an inside fastball past Tuesday night’s final hitter for her 12th strikeout.
The pitch was a weary Morton’s 106th, but she was determined to finish and she sparked Southeast Regional winner Rowan to an emphatic 8-0 victory against Southwest Regional champion Texas in a semifinal game in the Little League Softball World Series.
The game was nationally televised on ESPN2 and no doubt tuned in by many in Rowan County and beyond.
There was major irony because 8-0 was the same score by which Rowan won Monday’s pool game with Washington, a contest that became a subject of national controversy all day on Tuesday.
It became abundantly clear early Tuesday that Washington didn’t make a very spirited effort in Monday’s loss to Rowan, essentially tanking the game.
“Washington had two choices — go full-blast to beat us or lose a one-sided game with us and knock Iowa out of the tournament (by a run differential tiebreaker),” Rowan coach Steve Yang said. “They chose the strategy of trying to eliminate Iowa, but people are making a serious mistake in assuming Washington would’ve beaten us if they’d wanted to. That’s a false premise. That’s not giving us enough respect. I think our girls have shown that we’re a pretty good ball club. We’ve shown that we belong here. We’re certainly one of the best teams here. There’s no doubt about that.”
Little League officials were satisfied that there was enough questionable stuff going on in the Washington-Rowan game — standout players sitting out, players making intentional outs — that it upheld an Iowa protest and had Iowa and Washington meet in a play-in game early Tuesday.
Iowa eliminated Washington, 3-2.
But Iowa was in a difficult situation after using its ace to beat Washington.
Iowa’s standout pitcher would not have been able to pitch Wednesday if she had exceeded six innings pitched on Tuesday morning. With its second-best pitcher in the circle, Iowa lost, 5-4, in a semifinal game against Rhode Island before the Rowan game earlier Tuesday night.
So Rowan’s 11- and 12-year-olds will now play a tough Rhode Island team, that no one’s been talking about, for the world championship tonight at 9 p.m. on ESPN2.
“I told the girls in a huddle tonight that we were shocking the world,” Yang said. “Literally shocking the world because this is the World Series.”
Rhode Island lost a 3-2 game in pool play to Uganda, but it has come back strong. Rowan has come back strong from a 3-1 loss on Saturday to Iowa.
Rowan had little trouble against Texas after Morton got out of an early jam.
“They had a two-on, one-out situation and when she worked out of that, that was the turning point, and Kali started rolling,” Yang said. “She struck out seven of the next nine and we took control. We also played really solid defense again — no errors.”
Morton, who allowed five hits and walked four, drove in a run with a booming double to put Rowan up, 1-0, in the second inning.

Megyn Spicer make a great defensive play in right field and doubled off a runner at second base to help maintain the early slim lead.
Kary Hales had a key double in the third inning, and Mann’s two-run double made it 3-0.
Rowan pushed its lead to 6-0 in the fourth. Caylie Keller stung a run-scoring double and Hales and Taylor Walton drew bases-loaded walks.
Rowan scored its seventh run on an error, and Kaylin Dowling knocked in the final run in the sixth.
“We hit balls in the gap tonight (five doubles) for the first time in the tournament,” Yang said. “Our bats came alive. We played a lot better today. This probably was the best game we’ve played.”
Rowan pounded 11 hits. Morton had three, Mann had two, and Hales, Liza Simmerson, Walton, Ellen Yang, Dowling and Keller had one each.
Coach Yang joked that Morton was tired at the end because she was running the bases so much, but that’s a good problem to have. There are no automatic courtesy runners for pitchers and catchers in Little League, but teams can use one special pinch-runner per inning.
Understandably, the team is upbeat. Yang said the girls have moved past the thrown-game deal quickly, proved what they were all about, and now are ready for the last challenge.
“We’re on Cloud 9 right now because only two teams are left and we’re one of them,” Yang said. “One game left, and we’re excited about playing and then we’re going to be excited about coming home. We hope to coming home with the trophy.”

Controversy at LL World Series; team accused of losing to Rowan on purpose

By Dennis Davidson dennis.davidson@salisburypost.com According an article published this morning in the Des Moines (Iowa) Register, the West team from... read more