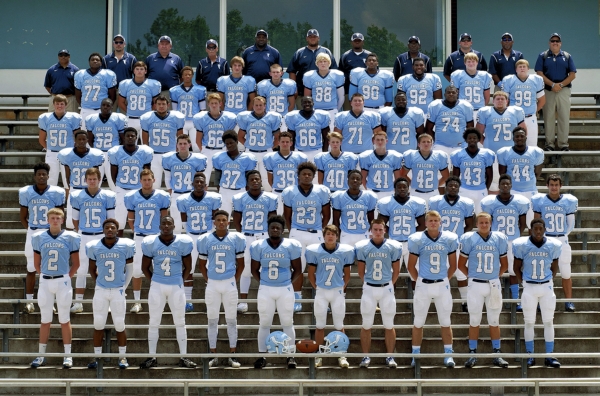 MOUNT ULLA — The plane has been fueled. Clearance from the tower has been granted. That means it’s only a matter of time before West Rowan takes off.

The 2015 Falcons and new coach Joe Nixon are good to go in the black-and-blue South Piedmont Conference. “The pieces are all there,” he said. “We have a chance to be very good.”

It all starts with Nixon, a former West assistant who helped produce eight consecutive conference champions from 2004-11. He spent the past three seasons guiding North Rowan to a 31-8 record and replaces Scott Young, who stepped aside for medical reasons. He inherits a team that needs a bit of tinkering, not a major overhaul.

“Everyone does (adjustments) this time of year,” Nixon said. “And if things fall into place we’ll be all right.”

With 13 returning starters — six on offense and seven on defense — the Falcons might soar. They enjoyed a five-game winning streak before finishing 8-5 overall and 5-3 in the SPC a year ago. The marquee returnee is left tackle Hezekiah Banks, a Division I prospect who will anchor West’s multiple offense. But Nixon is also high on junior left guard Javon Loftin, the lone underclassman on a well-seasoned OL. “In our offense, we’ll be pulling the guard a lot,” Nixon said. “We need someone who is able to move — and he’s that guy.”

Second-year starter Shane Barber (6-0, 250) is a technically astute center who will snap to senior quarterback Kacey Otto — who started 12 games last fall, passed for 1,273 yards and 13 touchdowns. He also threw 11 interceptions and spent most of the summer playing center field for Rowan County’s American Legion state champion baseball team. “He’s been playing baseball since Feb. 14,” said Nixon. “But he’s a leader, he’s athletic and he’s a returning starter. He’ll be our quarterback against Mooresville (in Friday’s opener).”

The Falcons have an explosive running back in junior Jovan Quarles, who averaged better than six yards-per-carry and scored four TDs last year. Top receivers include senior Juwan Houston and junior Kortez Weeks, both returning starters who run pinpoint routes.

Also on the D-line is sophomore Devin Turner (5-11, 240), a jayvee graduate who has learned to utilize his leverage. The linebacking corps includes converted running back L.J. Robinson and senior Kreshawn Alexander (5-10, 205), a former defensive end. The secondary is well-stocked, led by returning cornerbacks J.T. Sanders and Deyqan Byrd.

Otto returns to handle the punting chores and senior Austin Morrison is a first-year kicker and ex-soccer player.

It appears there’s enough here to produce another state playoff team. More than that will depend on staying injury-free and making adjustments. “I know,” Nixon said. “Everyone wants to talk about how good they are this time of year. We’ll talk about it week by week.”

LT Hezikiah Banks, senior (6-4, 335). A monster with the hands and feet of a prizefighter. Anchors a strong line that will lead the team downfield. Division I college programs seem very interested and East Carolina has offered.

DL Derrick Moreland, senior (6-4, 290). Aggressive third-year starter plays like he’s mad at the grass. Stuffs the run, pressures the quarterback and tackles with authority. Might be the complete package.