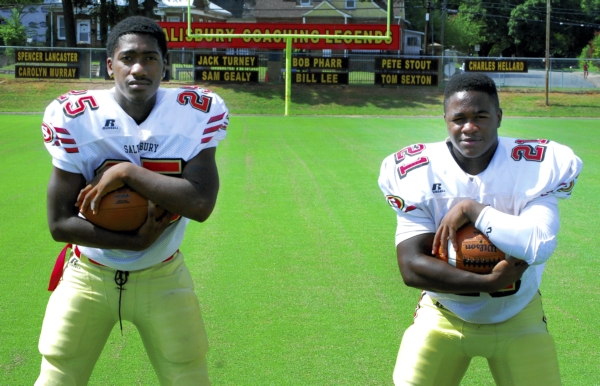 SALISBURY — It’s a well kept secret, but two of top three returning rushers in Rowan County are Salisbury Hornets.
The county’s top ball carriers in 2014 were 1,000-yard guys: North Rowan’s JaReke Chambers, Carson’s Brandon Sloop and Darren Isom and West Rowan’s Harrison Baucom.
They all graduated, but the next three names on the rushing leaders list — East Rowan’s Max Wall and Salisbury’s Willie Clark and Antwond Glenn — are still around.
Clark, a 5-foot-4 cannonball, scooted for 919 yards on 139 carries and enjoyed a three-TD night against East Davidson. Glenn, a halfback, eluded tacklers often enough to race for 885 yards on 158 carries. He produced a three-score game against West Davidson.
Together, the two Hornets accounted for 1,804 yards as juniors, with Clark rolling for an impressive 6.6 yards per carry and Glenn averaging a solid 5.6.
“We feel good about having them back,” Salisbury coach Ryan Crowder said. “They had to start games as sophomores and they had some success. Then they learned how to finish and how to win games as juniors. They’ve been constants in our backfield a long time.”
If you walk into the Salisbury locker room and ask for Antwond, no one knows who you’re talking about because Glenn is universally known by his unique nickname.
The story goes that as a youngster he made a thirsty request for a glass of Kool-Aid and it tripped off his tongue sounding like Bool-Aid. He’s been “Bool-Aid” ever since, although it’s been shortened over the years. Teammates and coaches simply refer to him now as “Bool-A.”
Glenn showed potential last season when he rushed 22 times for 203 tough yards to spark a 30-20 Central Carolina Conference win against Lexington. He was only the 10th back in the last 50 years to post a 200-yard rushing game for SHS.
“I broke my first run against Lexington and it gave me confidence,” Glenn said. “Everyone blocked. I knew it would be a great night.”
Glenn has put on about 10 pounds of lean muscle and checks in now at 178.
“I’ve gotten stronger and we all worked in the offseason,” Glenn said. “No one wants just an average season.”
Clark says Glenn is laid-back, but he experiences a personality change when the lights come on.
“He’s like (Seattle Seahawks back) Marshawn Lynch,” Clark said. “When the game starts, he’s in ‘Beast Mode.'”
Clark is as boisterous as Glenn is quiet. He chatters virtually non-stop to teammates as well as opponents. He usually backs up his words with deeds.
“He’s a scaled-down Ike Whitaker,” said Crowder, referencing a former Hornet fullback who earned All-America honors at Lenoir-Rhyne. “He’s pretty darn powerful for a high school kid his size. His lower body lifts are off the charts. He’s gained 30 pounds since his sophomore year, and it’s in the right places. His legs, his chest and his shoulders are thicker than last year.”
Clark is deceptively quick as well as deceptively stout. He posted three 100-yard games last season and had one as a sophomore. He has nearly 1,400 rushing yards for his career.
“My dad told me I could use my size as an advantage, and that started to click for me last year,” Clark said. “Sometimes people laugh when they see me for the first time and I tell them I’m a running back. But when they play against me, they usually say, ‘Wow, you’re pretty strong.'”
Clark is a busy Hornet who also shines in wrestling and track, but for now he’s focused on his final season of football.
“We’ve got a team full of seniors and I’m a captain,” Clark said. “There’s pressure in that, but I like it. When you’re a sophomore, it’s not like you can go tell seniors they need to lift weights. But when you’re a senior, young players look up to you and listen.”
The Hornets will be looking to throw more than usual with new offensive coordinator Clayton Trivett, but they also should be able to move the ball the old-fashioned way behind four senior linemen.
Clark and Glenn have been getting it done for a while.