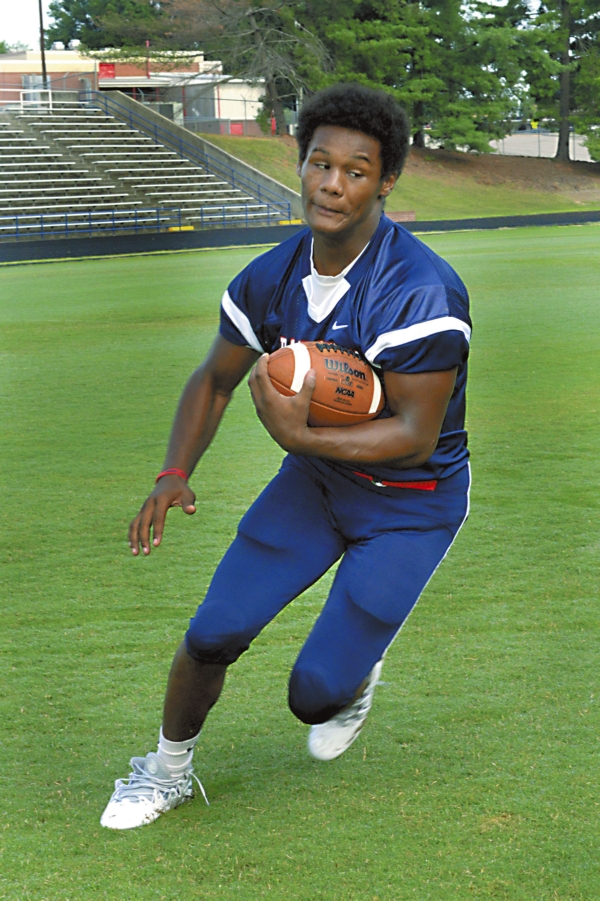 Wayne Hinshaw /for the Salisbury Post East Rowan’s Max Wall is returning as a wide receiver.

GRANITE QUARRY – There is no doubt opposing defenses will zero in on East Rowan’s Max Wall this season. But first they have to find him.

On any given play, the versatile Wall might be at tailback, or in the slot, or at wide receiver, or rolling out and pulling up to fire the option pass. He could even take a direct snap and run or pass.
“We will maximize his talent,” says East Rowan coach Kenneth McClamrock. “Max will play everything but offensive line for us, literally. We are going to move him around and try to find mismatches, try to find opportunities to put the ball in his hands.”
The 5-11, 175-pound junior may not be the biggest Mustang offensive weapon, but he runs a 4.5-second 40-yard dash and bench presses almost 300 pounds. Wall is also beginning his third varsity season for the Mustangs, making him the most experienced and dangerous offensive weapon for the team in 2015.
“I think the team is going to rely on me a lot and look to me to make big plays,” Wall says, “But if everybody does their job and the team plays together as a unit, it won’t just be me, it will be everybody else as well. We have a lot of good players.”
Wall is definitely an athlete, not only in football, but as a state qualifier in wrestling and a speedster for the Mustang track team. But football is his primary focus now and for the future. Since crossing the road from Erwin Middle School two seasons ago, Wall has been a critical three-way performer for the East varsity team on offense, defense and special teams. During his freshman season, Wall averaged 4.5 yards per carry in rushing for 607 yards and four touchdowns. He caught 16 passes for 256 yards and five scores, plus he threw a touchdown pass out of the option.
Last season, with the Wyrick brothers posting prolific numbers in passing, rushing, receiving and scoring, Wall was still a major weapon on the Mustangs’ 7-7 team that went three rounds deep in the state playoffs.

Wall rushed for 977 yards (5.4 per carry) and eight touchdowns, surpassing 100 yards on the ground four times. He had 26 catches for 257 yards and three TDs and on special teams, he had 338 yards in kickoff returns, including a 95-yarder for a score. He had another 206 yards in punt returns. He added a 38 yard option pass for a touchdown for good measure. As a part-time defensive back, Wall posted 31 tackles and an interception.
“Max is one of those special players who is a big-time college prospect and he realizes that,” McClamrock said. “We are asking a lot from him and he has done a super job of picking it up. We are pleased with the way he has responded to all the different things he has been asked to do.”
Of equal importance to the team and McClamrock is the way Wall has matured in his Mustang career as a player and a leader. “One of the things we talk to Max and other players about on a daily basis is how to be a good leader, whether it is with your emotions, your behavior or how you respond to adversity,” said McClamrock.
Wall will continue to play wherever he is asked this season but prefers to have the ball in his hands. “I like defense, don’t get me wrong,” he said, “but I would rather be more of an offensive and special teams guy. I would rather be running through people than tackling people, but I will do whatever is best to help the team.”
His uniform number is 7, so fans should look for Wall to be fully involved in all aspects of the Mustangs’ game on Friday nights. Just don’t look for him in the same place twice.