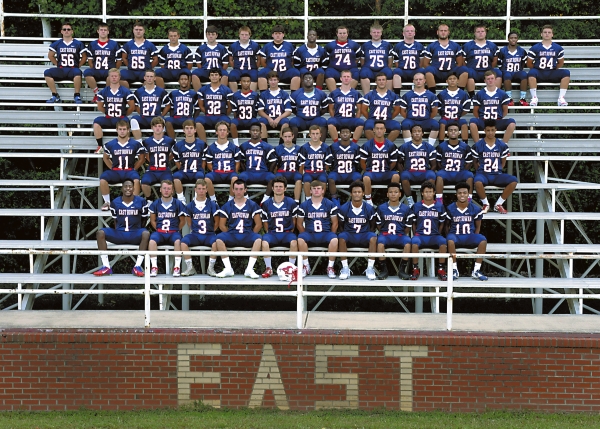 East Rowan Mustangs
2014 season 7-7 (5-4 SPC – 4th place)
State 3A playoffs: Beat Freedom 50-49; beat West Henderson 27-21; lost to South Point 42-32.
Head Coach: Kenneth McClamrock (2nd season, 7-7 career)
Returning Starters: 9 (4 offense; 5 defense)
GRANITE QUARRY – The big question: how do you replace almost 5,500 yards of offense, 29 touchdowns and 38 touchdown passes? The answer: you maximize the talent you have now and forge ahead.
East Rowan is a team celebrating the past but looking only to the future. “I think any year in prep football at any school, you graduate a lot of good players,” Mustang Coach Kenneth McClamrock says of the graduation loss of the Wyrick twins among others. “The key is to build a program where you have kids that can step right in and we have got kids that we feel really, really good about.”
Last season the Mustangs went 7-7 under new coach McClamrock made a remarkable three-round run in the state 3A playoffs, including a 50-49 upset stunner at No. 2 Freedom.
“There is a good rebound effect from that run,” McClamrock says. “That led us into the off-season a little excited, a little hungry and a little motivated. Our guys believe in themselves now and really believe they can continue to do good things.”
A couple of advantages for the 2015 Mustangs include being much more familiar with the system McClamrock and his staff have implemented and being able to have spring practice at the end of last year to work on all aspects of their game.
The Mustangs start the season with 85 players, nine starters back and a confident attitude. Their offense will be a multiple spread attack designed to give opponents a lot of different looks. “We are looking to spread the ball around,” McClamrock said. “We want six guys to catch the ball every Friday night and four guys to score at least a touchdown. That is our goal always.”
Key components of the East offense include multi-faceted junior Max Wall (see accompanying story) and a crew of highly talented wide receivers led by senior Naquis Caldwell (6-2, 170) and junior Stephen Hardin (6-0, 170). Directing the attack will be junior quarterback Tate Houpe (5-10, 170), who will also handle punting and placekicking duties. Anchoring the offensive line will be senior tackle Sawyer Kimmer (6-5, 275) and junior center Baxter Ketchie (6-0, 260).
On defense, the Mustangs will employ a multiple odd front, designed to confuse offenses by showing many different looks. “We will show a lot of movement and send guys from all over the place,” McClamrock says. Much of the strength will be in the defensive backfield, headed by all-county corner Wesley Porter.
“Our systems on offense and on defense are designed to win football games,” McClamrock says. “When our guys do what they are coached to do they are going to be put in a position to be successful.”
PLAYERS TO WATCH:
Max Wall – junior halfback (5-11, 170), All-County, accounted for 1,772 all-purpose yards as runner, receiver and return specialist. He scored 12 touchdowns in 2014 plus a two point conversion.
Naquis Caldwell – senior wide receiver (6-2, 170), 36 catches for 502 yards and 8 TD’s in 2014. A Division I talent and the team’s primary receiver in 2015.
Wesley Porter – junior cornerback (5-7, 150), All-County and All-SPC last season. Top returning pass defender.
Hunter L’Hommedieu – senior linebacker (6-0, 190). Will play in the middle as well as outside linebacker and will be a primary run stopper for East.