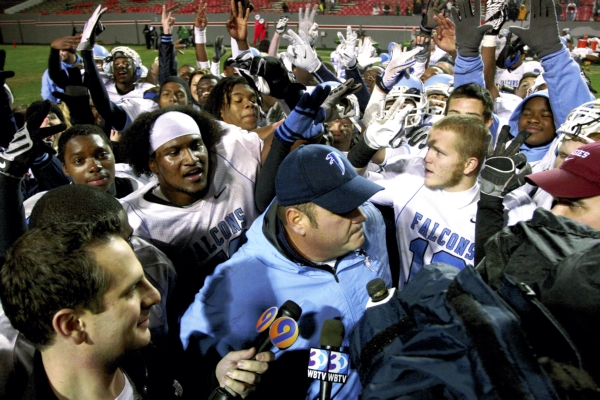 Justin Uriah/for the Salisbury Post The West Rowan Falcons defeated Eastern Alamance at Carter-Finley Stadium in Raleigh 34-7 in the 2010 3A NCHSAA football championship.

Rowan County football arguably peaked in 2010.
On Sept. 10, Salisbury visited West Rowan in Mount Ulla. Joe Pinyan vs. Scott Young. On paper, it was West’s B.J Sherrill and Dinkin Miller against the Hornets’ Romar Morris, John Knox and Dominique Dismuke, but the Falcons’ 28-0 victory was a testament to the quiet cornerstones of Young’s dynasty — the offensive and defensive lines.
West pounded the Hornets for 229 rushing yards and 21 first downs, while holding Knox to two completions and Morris, a game-breaking blur, to 46 rushing yards.
Everyone realized it was a serious confrontation when it happened, but the magnitude of that contest wasn’t clear until exactly three months later.
On Dec. 10, the Falcons steamrolled Eastern Alamance, 34-7, in Raleigh for a 16-0 season and a third consecutive 3A state championship. Meanwhile, in Winston-Salem, Salisbury smashed Elizabeth City Northeastern, 30-0, for the 2AA state title. Toughened by early losses to Carson, West Rowan and Davie, the Hornets won their last 10 games.
Two state titles in a single day, both in dominating fashion, provided a proud moment for Rowan County football coaches, players and fans.
Let’s take a look at where it all started.

1915
Five of the six Rowan County schools start a new season Friday (Carson will start a week later).
It will be an auspicious one. October 23 will mark the 100th anniversary of the first prep football game played by a Rowan team. On that date in 1915, Salisbury High’s 26 rookies challenged a veteran Greensboro team and took a 57-0 beating at the old fairgrounds in Salisbury.
If you’re wondering why Greensboro didn’t call off the dogs … well, they did.
Physician Dr. H.H. Newman, for whom Catawba’s Newman Park is named, was the first Salisbury football coach, although his tenure would last only two weeks.
Salisbury’s uniforms were black and orange, their head cheerleader was male, and with the Salisbury Post pumping up their debut, the contest drew a crowd of 350. It’s not known how many of those 350 had departed by halftime.
Newman had reason to believe there was only one way to go from that first game, but he was mistaken. A week later, Salisbury traveled to Statesville and allowed nine touchdowns — to the same player. Statesville breezed, 76-0.
Outscored 133-0 in two tries, Newman was replaced as head coach by Bob Doak. Doak was no fool and brought in a few recruits for a matchup with Concord, another first-year team.
Playing at home against Concord, William Snider scored the first touchdown in Salisbury history — and the second. Salisbury led 12-0, but then geography became a factor. The field at the Fairgrounds was sloped. Salisbury was running downhill when Snider raced for his touchdowns, but Concord had the benefit of the lopsided landscape in the fourth quarter and made a comeback.
Salisbury made two miscues attempting to punt uphill, and Concord capitalized with two touchdowns.
Even in 1915, accidents in the kicking game got you beat in a hurry, and Concord kicked a PAT to win 13-12.
Salisbury went 0-5 that first year, with two agonizing losses to Concord, two ugly losses to Greensboro and that 76-0 debacle at Statesville.
But 1915 provided a start. Then, in 1916, Salisbury would taste victory twice, whipping Concord 21-0 at the fairgrounds and 6-0 at Locke Mill.

Early days
Price
J.C. Price, Salisbury’s school for African-American students, began play in 1922 and lost only two games in its first seven seasons of competition. The 1930 Price team outscored opponents, 147-7.
• Price’s 1940 team was the most dominant ever in Rowan County, at least relative to the competition. The Red Devils, coached by “Prof” Lancaster and featuring Spotlight Jones and Scooterbuck Gaston, went 11-0 and drilled opponents, 336-0.
Price won the state championship for black schools in an era when schools weren’t classified by size. Price mauled Raleigh Washington, 19-0, in the state title game.
Lancaster’s 29-year coaching record at Price was 183-50-15, and he’s still No. 1 on the all-time wins list for Rowan County football. Price had undefeated teams in the World War II era that didn’t win state titles only because of travel restrictions.
In 1946, Price’s Steve Gilmore played in the first Shrine Bowl for black players, a game in Greensboro, pitting North Carolina all-stars against Virginia.
From 1950-52, Lancaster’s Red Devils won 23, tied two and lost one. Stars included Wade Jones, Theodore ‘Shaky” Bush, Roy Burney, George Alexander and Ernest “Mr. Touchdown” McCray.
The lone loss in that stretch was to Raleigh Washington in the 1950 3A state title game. Price’s 1952 team went 9-0 and beat Tarboro Pattillo, 13-7, for the 2A state title.

Boyden
Salisbury High became Boyden in 1926, being named in honor of Colonel Archibald Henderson Boyden. The first serious football success for the Yellow Jackets came under coach Gordon Kirkland in 1932 (9-1) and 1933 (9-1). Both those teams lost playoff games to Charlotte Central.
In 1932, a Pennsylvania native named Bill Ludwig arrived at Boyden to assist Kirkland. He took the reins of the football team in 1935. Service in World War II interrupted his long tenure, but he was head coach for 21 seasons. His record was 129-68-11. Ludwig’s standouts included Jerry Barger, Ken Owen and Eddie Kesler. Ludwig coached 27 Shrine Bowlers.
Playing in the state’s largest classification, Boyden won two state titles with Ludwig’s single wing offense. The 1955 team was known for its powerful linemen. The 1957 team featured the “Touchdown Twins” — Bobby Crouch and George Knox. Boyden (10-1-1) beat Durham for the 1955 title and shut out Fayetteville for the 1957 crown to finish 9-1-1.
Boyden’s stadium would be named for Ludwig in 1968.

Consolidation
The smaller Rowan schools also had success.
China Grove played in the 1946 2A state title game, while Landis’ Billy Ray Barnes went on to great success at Wake Forest and in the NFL.
Led by Tommy Dellinger and William Yates, Rockwell made a run in 1957 and posted a 9-1 record.
The late 1950s brought the consolidation of the small schools. North Rowan opened its doors in 1958. West Rowan and East Rowan debuted in 1959.
Rivals Landis and China Grove staged their last athletic confrontation with an epic baseball game in May, 1961. They joined forces that fall as South Rowan.

Integration
Black standouts started arriving at Boyden from Price in the mid-1960s. In 1967, Boyden’s James Teal became Rowan’s first black all-state player. Boyden running back Derrick Anderson broke a barrier when he was recognized as Rowan County Offensive Player of the Year for 1968.
The completion of the integration process at the end of the decade meant the closing of Price and East Spencer’s Dunbar High and impacted the athletic fortunes of Boyden, North Rowan and East Rowan dramatically.

Mustangs
East Rowan’s 13-0 1969 season included dramatic postseason wins against Concord and Shelby for the championship of the Western North Carolina High School Activities Association. That team included not only the passing combination of C.M. Yates-to-Johnny Yarbrough, but also the prolific running tandem of Randy Sheffield and Jerry Sifford, and the toughest defense (6.6 points per game) in school history.
The perfect season was the centerpiece for a great run by coach W.A. Cline. East also won conference titles in 1968, 1970 and 1974 and division championships in 1971 and 1972.

Pete Stout
Boyden transitioned into Salisbury High for the 1971 football season.
There was a new nickname (Hornets) and a new school color, adding the red of the Price Red Devils to the traditional Boyden black and gold.
Pete Stout was the school’s coach from 1966-75, a decade in which his teams never lost to a county opponent and were a power in the South Piedmont Conference, a league as competitive as any in history.
Stout’s defensive-minded teams won WNCHSAA titles in 1973 and 1974 against Watauga and Shelby. Salisbury shared the WNCHSAA crown in 1971, tying South Point, 14-14.
Stout always said his 1970 club, the last team with Boyden on their jerseys, was his best. That team featured two-time all-state defensive lineman Robert Pulliam, quarterback Kenny Holt and running backs Aubrey Childers and Roger Jackson.
The cover of this football edition includes a pregame scene from the 1970 Piedmont championship game between East Rowan and Boyden at Catawba that was hyped as a “game of the century” and attracted a crowd that may have been the biggest in county history.
Boyden won that showdown, 40-19. East Rowan still had its passing combination from its undefeated 1969 team, but it had lost much of its defense.

1970s-1980s
Consistent programs arose in the county in the 1970s, as Reid Bradshaw built a powerhouse at South Rowan and Larry Thomason got things rolling at North Rowan.
Bradshaw coached 12 seasons at South. He started out 6-24, but he went 72-24-3 in his last nine seasons (1974-82). Memorable South players from that era were running backs Greg Poole and Michael Ramseur.
Larry Deal followed Bradshaw with more success. South won a school-record 11 games and the Division II championship of Western North Carolina in 1983, then made a solid transition to 4A football against the Winston-Salem schools in 1985.
Thomason was 129-65-3 in 19 seasons (1969-87) and coached 11-1 conference champs in 1982 and 1985. His standout players included Jimmy Heggins, Kendall Alley, Bobby Myers, Mark Sturgis and Darryl Jackson.

1990s
The most exciting moments in Rowan County in the 1990s were provided by North Rowan coach Roger Secreast’s “Airport,” where QBs such as Carvie Kepley, Mitch Ellis, Mario Sturdivant and Alfonzo Miller put up unprecedented numbers.
Secreast’s spread-the-field, throw-it-around approach was ahead of its time. North won 12 games and reached the 1992 3A state championship game with Kepley and running back Nathanial Hyde and won 12 games again in 1994. Secreast was 108-59 in 14 seasons at North.

Carson
Carson opened in 2006, and there were growing pains as coach Mark Woody, now the athletic director, tried to lay a foundation. The Cougars dropped their first 22 games, but they have been competitive since they broke through against North Rowan for their win on opening night in 2008.
Carson backs Shaun Warren and Brandon Sloop are among the county’s all-time rushing leaders.

Joe Pinyan
Joe Pinyan’s 10 years at Salisbury High produced 100 victories, including that 2010 state title. When he took over in 2003, the Hornets hadn’t had a winning season since 1995.

Scott Young
Scott Young was hired as West Rowan head coach in 1997.
The Falcons turned the corner in 1998, and in 2000, led by linebacker James Francis, they won the first conference championship in school history by knocking off A.L. Brown and Concord in consecutive weeks.
The Falcons became consistent winners with physicality and execution out of the I-formation and hard-nosed defense. Running backs Ben Hampton, Joe Jackson and Wade Moore made their marks in the county record books, although the playoffs proved frustrating for many years.
In 2008, the Falcons broke through for their first 3A state title with a junior class that included K.P. Parks, Chris Smith and Jon Crucitti. Two more state championships followed, and Young’s teams put together a staggering 46-game winning streak that was the longest active streak in the nation.
Mooresville ended West Rowan’s winning streak on opening night of the 2011 season, but the Falcons weren’t done. They reached their fourth straight 3A title game before losing to Havelock.
East Rowan finally ended West Rowan’s 44-game winning streak in county games in 2012. That amazing streak had started in 2001. Young’s career record: 172-54. He ranks No. 2 in county history.

Today
The excitement continued in Rowan County in 2013 as Joe Nixon guided North Rowan to a school-record 13 victories. In 2014, East’s Wyrick brothers, Samuel and Seth, and North Rowan’s JaReke Chambers broke records that had stood for generations.
After a century, Rowan County football is still going strong.