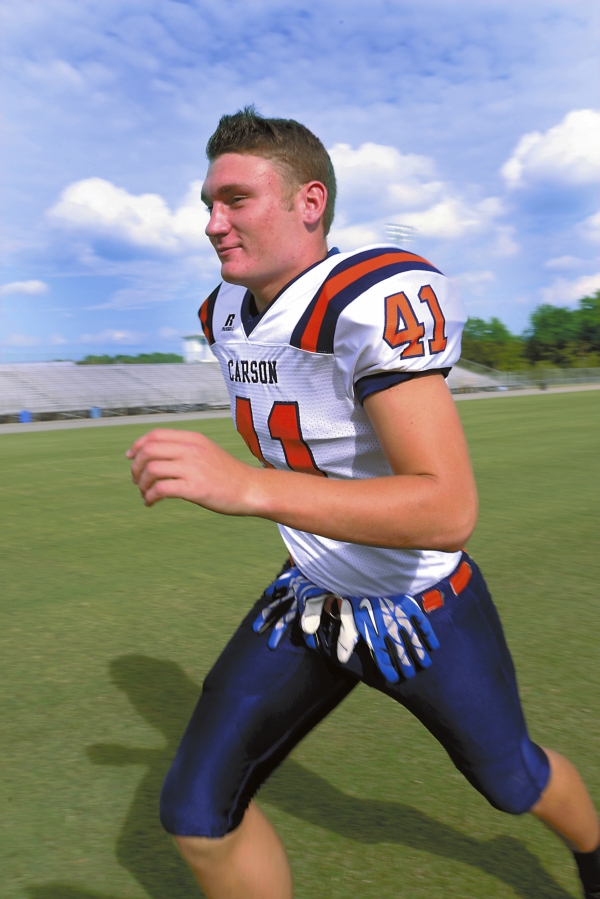 CHINA GROVE – In football years, Carson High’s Ryan Bearden might still be considered a “youngster,” but he has grown up and out very quickly.
The outside linebacker and defensive end enters his senior season for the Cougars at 6-4, 236 pounds, with a playing style Coach Joe Pinyan has properly characterized as “relentless.” Not surprisingly, his “dream” play is exploding on a blitz, being untouched and smashing into the quarterback. He declines to call it inflicting pain. “I just like making a good play,” said Bearden. “I want them to know who No. 41 is.”
In fact, that is exactly what he did last season, in a key blitz against East Rowan’s Sam Wyrick that wobbled the Mustang star, changed the nature of the game and led to a big, 48-21 Cougar win.
Bearden didn’t start playing football until his seventh grade year at China Grove Middle School as an offensive lineman but decided to bypass the game in the eighth grade. He chose to rejoin his friends and play junior varsity as a freshman at Carson but that only lasted a half season. He got called up to the varsity and has been a mainstay on Cougar defenses ever since.
While he has a good understanding of the Carson defensive system and Pinyan’s expectations, Bearden points out —”I am still learning the game. I have more to learn and hope to get better and better,” he said. As for his approach to the game, “I want our defense to set the tone for the game, keep my head in the game and control what the other team can do on offense.”
Bearden may still be a student of the game but his numbers last season were impressive. He had a total of 78 hits, including 10 for loss, and 37 assists. Bearden also recorded five sacks, an interception and two fumble recoveries.
“Ryan is probably going to fare better at defensive end at the next level because of his size,” Pinyan notes, “But because of his ability and our scheme, he can play linebacker or go down on the defensive line. Because he is just so dadgum athletic, he can make plays out in space or he can roll up his sleeves and go to work in the trenches.”
Athletic is the best way to describe Bearden because he is a true three-sport star. In addition to football, he is the center and top rebounder on the Carson basketball team, while in baseball, he is a slugging third baseman, catcher and occasional fireballing pitcher for the Cougars. He plans to do it all over again during his senior year.
“I just like playing everything,” Bearden says. “I like being an athlete, a multi-sport athlete”.
After graduation next spring, Bearden says he hopes to play football or baseball in college but is undecided at this point and has no firm offers on the table. Expect that to change this year.
“I am not sure he has fully tapped his abilities in football because he does play basketball and baseball too.” Pinyan says. “Once he gets to college and focuses on one sport, he is going to be really good. I think football will pay for his education but that is up to him.”
In the meantime, Pinyan is looking for Bearden to have a great season in 2015. “Ryan is the kind of guy you can have success building around,” said Pinyan. “We are looking for big things out of him this season. He is a good leader on the field and the other players really respect him.”