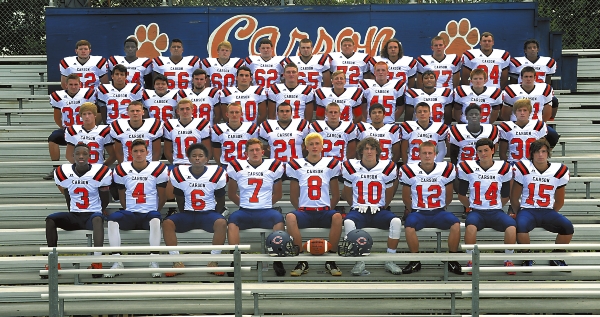 Davidson column: The wonderful season of football is among us

Carson High High Cougars
2014 season 4-7 (3-5 SPC – T-6th place)
State 3A playoffs: none
Head Coach: Joe Pinyan (3rd season (11-12), 111-48 career 12 seasons)
Returning Starters: 12 (5 offense; 7 defense)
CHINA GROVE – One thing is certain, the 2015 Carson Cougar football team will not be your typical Joe Pinyan team. The veteran coach is well known for his wishbone attack that relies on pounding out yardage on the ground.
Coming off a disappointing 4-7 season in 2014, the Cougars lost their final two games, missed the state 3A playoffs and graduated their twin bulldozing runners, Brandon Sloop and Darren Isom. The frustration was best demonstrated by the fact they scored 358 points in 11 games but allowed the exact same number. Yet there is no despair in the Cougar camp as they return 12 starters, including seven on defense. It will just be a different kind of team.
“Our personnel is a little different than we have had in the past, so that means we are going to have to maybe be a little more creative in what we do offensively,” said Pinyan.
But Pinyan quickly notes that the nucleus of his current team is made up of players who posted back-to-back 9-1 records while jayvees. “They have developed a winning mentality that we hope will carry over to the varsity,” Pinyan says.
The 2015 Carson varsity features 43 players including 18 seniors. The lone sophomore on the squad is the player expected to have the biggest impact on Cougar fortunes this season and in the future. Quarterback Owen White (6-4, 160) has already established himself as an elite baseball player and will now bring his athleticism, his running ability, and an arm that can toss a perfect spiral 60 or more yards.
So does he have any problems putting his offense in the hands of an untested sophomore? “Not this one,” Pinyan says with the hint of a twinkle in his eye. “He is very intense and has a lot of savvy about him. He is just so versatile and he is probably one of the best athletes in Rowan County right now. He just gives us a lot of different things. We’ll try to take full advantage of whatever he can do for us.”
Last year’s quarterback, Andy Lear, ran for 333 yards and passed for 560 while accounting for 10 TDs. Now he has switched to halfback, alongside his twin brother Austin, creating a “twin Lear” rushing attack. They both run the 40 in 4.6 seconds. Completing the backfield is returning fullback Dillon Livengood. The biggest receiving weapon will be senior Brandon Honeycutt.
With seven starters back, the defense should be greatly improved, anchored by linebacker/defensive end Ryan Bearden (see accompanying story), defensive back Armani Hogue (5-9, 172 Jr.), a defensive linemen Austin Russ (6-3, 262) and Tanner Christy (6-3, 215).
Pinyan noted he prefers not to have players go both ways but will create depth for his team by getting key guys to learn a second position. “I think we are going to have to create a little depth and be creative there on how we do some things.”
SOME PLAYERS TO WATCH:
Ryan Bearden – senior OLB and DE (6-4, 236). The leader of the Cougar’s experienced defense with 78 tackles and five sacks last season.
Cole Howard – junior PK and punter (5-11, 150). He is a soccer style kicker who can kickoff into the end zone consistently and is a field goal threat.
Brandon Honeycutt – senior wide receiver (6-0, 180). Coming off a knew injury, he caught 14 passes for 290 yards and two TDs last season plus two PAT conversions. Pinyan calls him “…one of the best receivers I have ever coached.”