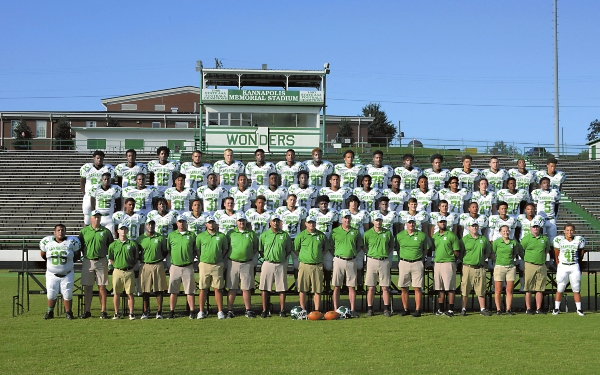 The A.L. Brown Wonders are looking to be the 4A Mecka conference champions this year.
With it only being the Wonders’ third year in the conference, and considering that the conference is also the home of the Mallard Creek Mavericks (4AA state champions last year), it won’t be an easy task for Brown.
But the Wonders have the talent to do it. This year, Brown has a legitimate chance to win the conference and go deep into the state playoffs.
The Wonders’ top talent includes returning seniors and promising juniors.
Sandon McCoy and Jayln Cagle will be getting most of the touches out of the backfield for Brown.
Cagle and McCoy each bring different things to the table. McCoy is a power personified. He runs through linebackers and never shies from contact. Unlike most big running backs, McCoy also has the ability to bounce to the outside and create something from nothing.
On the other hand, Cagle is more of a shifty back who is also a skilled receiver.
Cagle and McCoy combined for over 1,800 yards last year and the 3,000-yard mark is a realistic expectation for the tandem in 2015. >
Senior Damon Johnson will be returning as the starting quarterback.
Last year, Johnson threw for 19 touchdowns and completed nearly 50 percent of his passes. He’s expected to exceed those numbers, considering that this will be his second year leading the offense.
While the Wonders’ experienced offense is certain to be potent, the young defense has the potential to be equally strong.
Dantrell Barkley, a talented defensive lineman, returns and will be one of the toughest players to block in the Mecka Conference.
Another player on defense to watch will be Steven Howie. \Howie is a 6-1, 210-pound junior linebacker. He is not finished growing physically and neither is his potential. He has great football instincts and will have to be accounted for by opponents.
The Wonders expect to be very good — but so does most of their 4A league.

Coach: Mike Newsome (5th year in Kannapolis, 35-17)
2014: 6-6, 4-3 Mecka
The challenge: The top half of the league is always fierce and athletic and A.L. Brown is considerably smaller than the schools it’s competing with. The Wonders are 8-6 in league games in their two seasons after moving up to 4A and they are 0-2 against powers Hough and Mallard Creek.
It’s been a downward trend for the Wonders the last four years: 12-2, 10-4, 7-5, 6-6. Six wins last season was the fewest for the Wonders since 1996.
Schedule: The Wonders have localized their non-conference games, taking on former Mecka member Robinson (now 3A), rival Concord, South Rowan, Mooresville and Northwest Cabarrus. Weddington and Berry have been subtracted.
The big question: Johnson, Cagle and McCoy are sure things if they stay healthy, but how much has the defense improved? The Wonders put up 36.8 points per game last season and still lost six times. The 50-42 loss to Reagan in the first round of the 4A playoffs wasn’t a unique scenario. Other losses were by scores of 48-35 and 52-35.
The start: It’s hard to get any more exciting than a season-opening live TV game at home on Thursday against Concord.