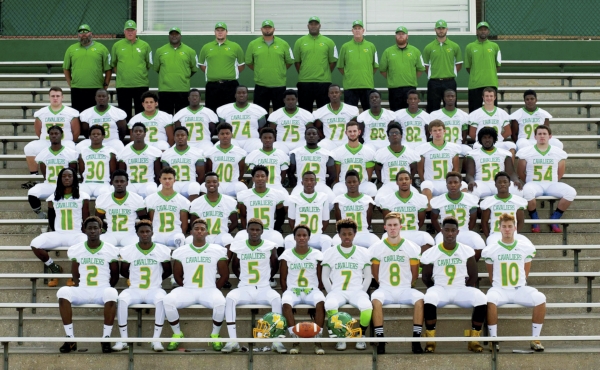 SPENCER — No one has to tell first-year head coach Ben Hampton that he has his work cut out for him.
He’s following a coach, Joe Nixon, who departed for West Rowan after 31 victories in three seasons.
The only other time North Rowan had a three-year stretch like that was when Roger Secreast-coached teams produced a state finalist and a state quarterfinalist and racked up 32 victories from 1992-94.
After back-to-back perfect seasons in the Central Carolina Conference — the Cavaliers destroyed league opponents 415-76 while going 10-0 — there’s really only way to go. Unfortunately, that’s down.
The schedule isn’t North’s friend. There are no sure wins in the six non-conference games.
“I’m sure everyone questions whether we can keep it going here,” Hampton said. “I’m a first-year coach (and also AD) and we’ve got a lot of new faces.”
Graduated wiped out North Rowan’s prolific offense, and guys like record-breaking running back JaReke Chambers, quarterback Alexis Archie and receiver Sakil Harrison aren’t easily replaced.
The only player who touched the ball on a regular basis for North in 2014 who is still around is center Taelor Davis, who was snapping it. Tackle Robbie Monroe is the only other returning starter on offense.
Alonzo Sirleaf, who caught 10 passes and scored two TDs before breaking an ankle, is the closest thing to a skill-position veteran the Cavaliers have.
Hampton looks for A.J. Shields, Trey Stoner and the Gray twins, Desmond and Deandre, to emerge as capable receivers. He likes the potential of his quarterbacks — junior Corbin Smith and sophomore Josh Ellis — but they’re going to have to grow up under fire without a veteran running back to help them.
There’s a committee at running back. Hampton is counting on new faces such as Xavier Haley, Jaden Jones and freshman Jaden Perry.
“We’ve got talent, but it’s green,” Hampton said. “We’ve got to grow up fast and we’ve got to adjust to the speed of the game on Friday nights.”
The good news for the Cavaliers is they have seven starters back on a defensive unit that had the best statistics in the county last season.
North Rowan plays a 4-2-5 defense, and the front six will be seasoned veterans. Defensive ends Zion DeBose and Jake Pritchard, nose Steven Thurston, tackle Terry Cathcart and linebackers Omar Lipscomb and Javin Goodine are no strangers to big games and have made plenty of tackles.
Courtney Roseborough and Jaylen Brown are the most experienced players in the back five. Hampton expects Salisbury transfer Eric Gibson to make an immediate impact.
“Our older, more mature players are on defense, so we’ll look for that defense to propel us while our offense gains experience,” Hampton said.
North’s staff stayed intact, other than the change at the top. That’s a big factor as the Cavaliers try to make history with a third straight league championship.
“North lost good players, but they’re still the top dogs in the CCC until someone can prove they’re not,” Salisbury coach Ryan Crowder said.