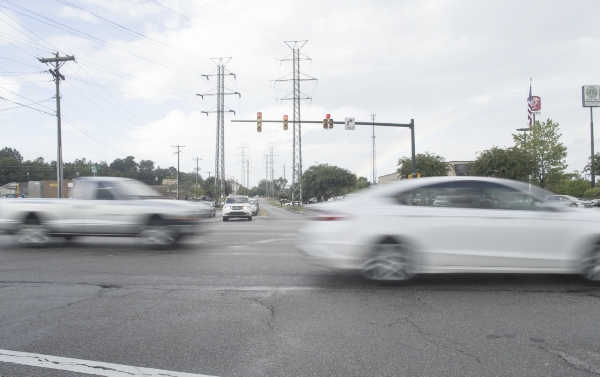 Cars zoom down Innes Street near its intersection with Arlington Street. The intersection and several others may see light times change as a result of a city project. Josh Bergeron/Salisbury Post

Salisbury aims to improve commute times with a broad-ranging traffic light retiming project that’s currently under way and involves three of the busiest streets in the city.

Streets involved in the retiming project include Innes, Main and Fulton streets. City Engineer Wendy Brindle said Innes — from Craige Street to Avalon Drive —  has been the focus of initial work, which began early this summer. Later, Brindle said, city staff will evaluate light times on Main — from Kerr to Monroe streets —and Fulton Street at its intersections with Horah and Monroe streets.

The goal, Brindle said, is to help traffic progress as smoothly as possible through Salisbury. Eventually, Brindle said, city staff hope to evaluate every coordinated traffic signal in Salisbury. City staff evaluate traffic light signals that are coordinated with others nearby for timing changes every 18 months. An evaluation doesn’t necessarily mean light times will change.

Brindle said the city will look at specific areas if Salisbury motorists have concerns.

This time, the city is addressing two of the busiest corridors in Salisbury. The section of Innes Street being evaluated for traffic light retiming stretches from a few blocks north of downtown, adjacent to Salisbury Motor Co., to the shopping complex immediately to the south of Interstate 85.

Fulton Street’s intersections included in the project are in the West Square neighborhood.

Brindle said this year’s streets were chosen because city staff had collected data on the intersections.

She didn’t say how times might change at individual intersections. She said “traffic volume and desired progression” would determine cycle lengths — the amount of time it takes for a light to turn red, green and red again.

“Due to heavier traffic at key intersections — for example Innes and Arlington — cycle lengths have increased for certain times of the day, and may be noticed by motorists,” she said. “When a cycle length must be increase at a large intersection, it may be ‘half-cycled’ at adjacent, smaller intersections.”

The combination of full- and half-cycles would allow lights to be coordinated along a corridor, she said.

City staff is also reviewing the timing of several “free signals” — ones located away from other traffic signals — as part of the same retiming project. Examples of “free signals” include the intersections of Innes Street and Jake Alexander Boulevard, Fulton Street and Lincolnton Road, and Faith Road and Innes Street.

If motorists have questions or concerns, Brindle suggested calling her at 704-638-5201 or Salisbury Traffic Engineering Coordinator Vickie Eddleman at 704-638-2148.