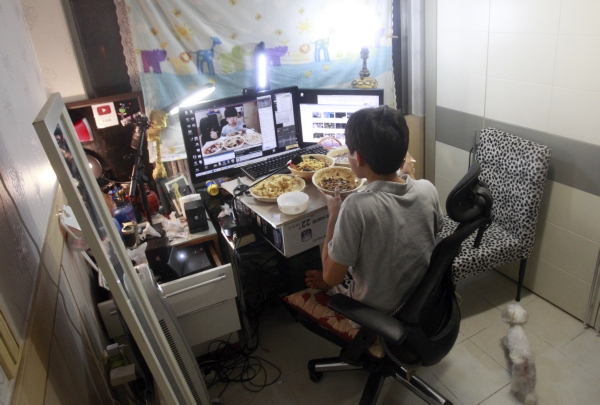 In this Monday, Aug. 17, 2015 photo, Kim Sung-jin, 14, broadcasts himself eating delivery Chinese food in his room at home in Bucheon, south of Seoul, South Korea. Every evening, he gorges on food as he chats before a live camera with hundreds, sometimes thousands, of teenagers watching. Thats the show, and it makes Kim money: 2 million won ($1,700) in his most successful episode. Better known to his viewers by the nickname Patoo, he is one of the youngest broadcasters on Afreeca TV, an app for live-broadcasting video online launched in 2006. (AP Photo/Julie Yoon)

1. BANGKOK BOMBING CARRIED OUT BY ‘A NETWORK’

Thailand’s national police chief says the man seen in a grainy security video leaving a backpack behind just 20 minutes before the explosion did not work alone.

Extremist militants reportedly take Khaled Asaad’s body to Palmyra’s archaeological site and hang it from one of the Roman columns.

The decision is a milestone for the pharmaceutical industry, eager to replicate the success of impotence drugs for men.

An Indiana television station reports the development six weeks after authorities seized electronics and other items from Jared Fogle’s home near Indianapolis.

5. WHO ACCOUNTS FOR HALF OF JEB BUSH’S DONATIONS

About 50 percent of the roughly $120 million raised to help him win the Republican presidential nomination comes from donors who previously gave to his brother or father.

After Vera Smith died during Hurricane Katrina, her body lay on a sidewalk for days and then became a symbol of a stricken city.

Hundreds of people, sometimes thousands, are watching online as Kim Sung-jin, a 14-year-old from Seoul, gorges on food and chats before a live camera.

8. HACKERS CLAIM TO HAVE EXPOSED ASHLEY MADISON USERS ON WEB

A group calling itself Impact Team says in a statement the owners of the matchmaking site for cheating spouses did not bow to their demands.

9. WHY CHELSEA MANNING IS FOUND GUILTY OF VIOLATING PRISON RULES

The transgender Army private is accused of having a copy of Vanity Fair with Caitlyn Jenner on the cover and an expired tube of toothpaste.

He is given an immediate mandate to restore the image of an IAAF hierarchy grappling with a doping controversy.

Rowan weather: Another chance of showers

Yesterday’s rain was a welcome relief, and we have a 40 percent chance of rain today. Showers and storms are... read more