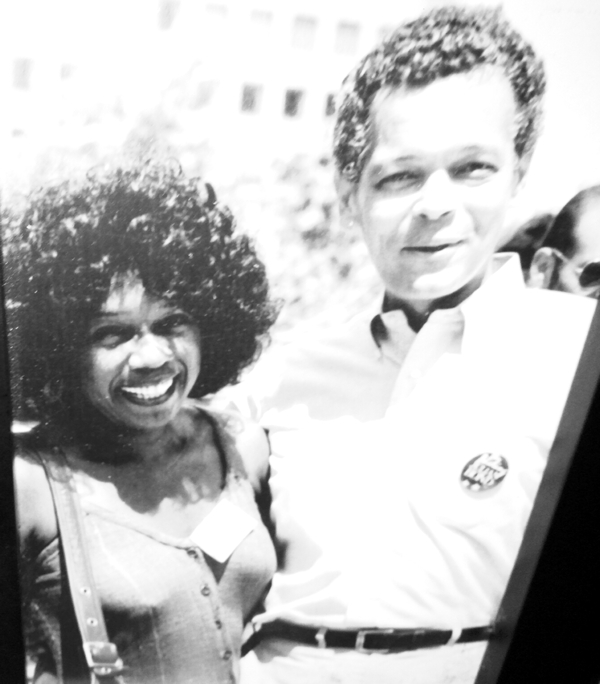 Deedee Wright, left, of Salisbury worked on the the U.S. House campaign of Julian Bond, right, when he ran against Rep. John Lewis. Photo courtesy of Deedee Wright

Wright: Bond was ‘strong worker in vineyard of civil rights’

SALISBURY — Deedee Wright of Salisbury said the death Saturday of Julian Bond means “we have lost another strong worker in the vineyard of civil rights.”

“But his leadership and work is still being used even today (as) young African-Americans fight with the ‘Black Lives Matter’ movement,” Wright said.

“… His legacy is huge, because he worked across the racial divide of trying to bring this nation together as one.”

Wright, a civil rights activist since her high school days in Greenville, S.C., and her college years in Atlanta, said she and Bond’s lives and work “crossed in many ways throughout the years.”

“I served as a Senate intern with Julian in 1973 while a student at Clark College in Atlanta,” Wright said. “I later worked in his (1986) campaign for the U.S. House of Representatives in his run against Rep. John Lewis.”

Bond lost that bid for Lewis’ seat, “but went on to serve his people and others for equal rights,” Wright said.

In 1960 in Raleigh, Bond helped to form the Students Non-violent Coordinating Committee, and he served as that organization’s communications director for five years.

He was elected to the Georgia State House in 1965, but because of his then controversial stand against the Vietnam War, he was not allowed to take the oath of office. His case went to the U.S. Supreme Court, which ruled in his favor, and Bond served in the Georgia House from 1967-75, then the Georgia Senate from 1975-86.

Bond cofounded the Southern Poverty Law Center and was its head from 1971-79. He also led the national NAACP from 1998-2010 and was a history professor at the University of Virginia.

Wright said the last time she saw Bond was in Columbia, S.C., at a 50th anniversary of 1961 fights by civil rights groups, including the NAACP, SNCC and CORE.

Bond was honored for his work with SNCC, and Wright was recognized for her work with the National Association for the Advancement of Colored People. CORE stands for Congress of Racial Equality.

“Julian was consistent in his work for civil rights,” Wright said. “He was never loud or overpowering in his conversations, but always firm in his delivery. He did his research, and when he spoke, he knew pretty much what he was talking about.”

SALISBURY — A driver for Deal’s Glass Services died Monday afternoon after his van hit the back corner of a tractor-trailer stopped on... read more