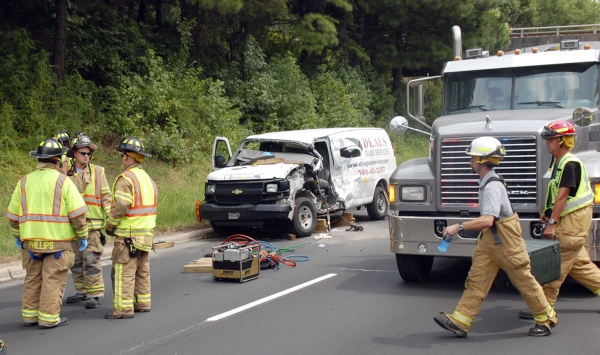 Mark Wineka/Salisbury Post The driver of a Deal’s Glass Services van was killed Monday afternoon when his van struck the rear end of a Trexler’s Trucking Inc. trailer, right, on Jake Alexander Boulevard near the U.S. 29 overpass.

SALISBURY — A driver for Deals Glass Services died Monday afternoon after his van hit the back corner of a tractor-trailer stopped on Jake Alexander Boulevard near the U.S. 29 overpass.

Police had not released the driver’s name Monday evening.

The van’s driver side door was torn away in the impact and wedged itself in the back right side of the Trexler’s Trucking trailer.

The driver of the van was pinned in the vehicle. The Rowan Rescue Squad, Salisbury Fire Department, Salisbury Police, Rowan County EMS and the Highway Patrol responded.

James Wilcox, who said he was heading for work, saw the accident unfold in front of him. His car was behind the Deal’s Glass Services van when they were stopped for a light at Julian Road, heading west toward U.S. 29.

It was obvious the Trexler Trucking tractor-trailer had stopped for some reason in the left lane ahead of them, Wilcox said, adding vehicles had plenty of time to move over.

“The guy in the white van had all day in the world to miss this guy, and he kept going,” Wilcox said. “He was not paying attention at all.”

The truck driver said he had stopped to avoid a motorcyclist.