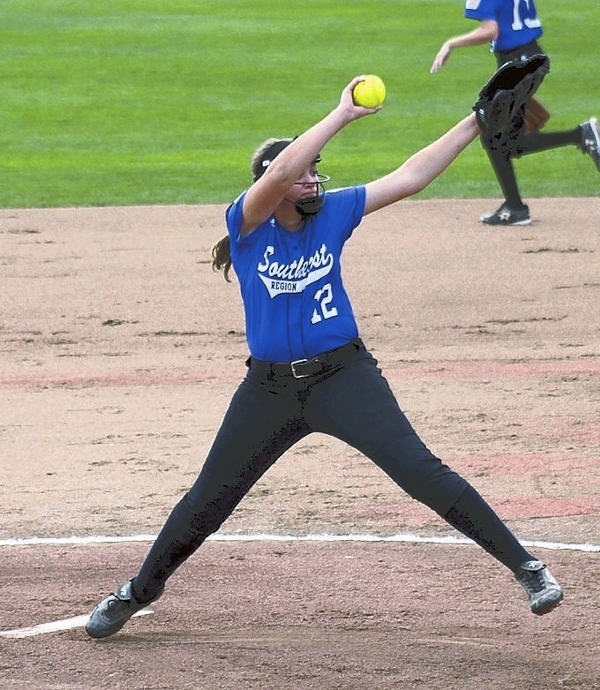 Rowan Little League’s softball team will play on ESPN2 tonight at 9:30 p.m. (Eastern time). The game will be played in Alpenrose Stadium in Portland, Ore.
Pitchers Kali Morton and Taylor Walton combined on a no-hitter as Southeast Regional champ Rowan earned a berth in the Little League World Series semifinals by winning, 8-0, on Monday against West Regional champion Washington.
Morton pitched four innings, while Walton worked the last two.
Rowan scored five runs in the bottom of the first and never looked back.
“They went down 1-2-3 in the first inning and we could see they were down a little bit,” Rowan first baseman Kary Hales said. “Then we started hitting the ball.”
Leadoff batter Allison Ennis had three of Rowan’s 10 hits and scored two runs. Ennis has been the catalyst for Rowan’s offense. She’s not looking to walk, she’s looking to swing the bat, and she’s been making solid contact.
“I like to hit the first nice pitch I can get,” Ennis said. “And I try to hit every part of the ball.”
Caitlin Mann drove in two runs. Hales, Liza Simmerson, Walton, Ellie Wilhelm, Kaylin Dowling and Caylie Keller scored a run each.
“Our first three hitters (Ennis, Hales and Mann) hit the ball very hard and we were able to jump on them pretty good,” Rowan coach Steve Yang said. “When this team gets a lead, it’s confidence grows, and it’s tough to beat. We were able to rest Kali after four innings and Taylor came in and did a great job. We were able to put it in cruise after that first inning.”
Washington had only two base runners — one walk and one HBP — in the game played in the late afternoon, Oregon time.
A 3-1 setback to Iowa on Saturday had put Rowan (15-1) in a backs-to-the-wall position in pool play, but the girls, ages 11 and 12, responded with a 12-0 win against Philippines on Sunday, followed by Monday’s win against a team that had beaten Iowa and had entered the final day of pool play unbeaten.
“We didn’t get down when we lost to Iowa,” said Morton, who pitched four hitless innings Monday after firing a one-hitter on Sunday. “We knew we didn’t play our best, and we knew if we did play our best, we could start a new winning streak.”
Added Ennis, “We lost a game, but were able to refocus and regroup.”
Rowan, Iowa and Washington (a 4-3 winner against Iowa) all finished 3-1 in pool play. Rowan got the No. 1 seed from the pool. Run differential was supposed to determine positioning in the event of a tie, but Iowa and Washington will play a tiebreaker game early today.
Yang said his team wasn’t concerned with run-differential formulas going into Monday’s game.
“We just wanted to win and we were confident that if we won we’d be in good shape,” Yang said. “This was the biggest game they’ve ever played in and they handled it really well.”
Yang’s daughter, Ellen, is Rowan’s third baseman.
“I’ve been a little nervous, but when you have a game where you jump on them fast, you’re not so nervous,” Ellen Yang said. “Every day we play, it gets to be a little more fun and a little less nervous.”
Morton agreed with that assessment.
“It’s the World Series, so it’s exciting and it’s hard to keep calm,” she said. “But you have to focus and play. Today we were focused.”
Coach Yang said his team is practically bouncing off the walls with excitement, knowing people back home will get to watch them on TV, but he’s confident they’ll still play their best with the world watching.
“We feel happy, we feel fortunate, and we feel lucky,” he said. “It’s a thrill to be representing Salisbury, Rowan County and North Carolina.”
Can they win on national TV?
“Every tournament we’ve been in, I’ve felt like we were good enough to win if we play our best,” Yang said.
Besides playing softball, the Rowan girls are making international friends. They noticed at a lunch that the Ugandan team didn’t have a lot, and they learned that the Uganda team’s luggage and equipment were lost somewhere between the airport and hotel. All those girls had left was their gloves, although Easton provided them with helmets and bats.
“Our girls and parents asked if we could help and we ended up buying them backpacks and photo packages,” Coach Yang said.
In the long run, that might be a more valuable experience than anything that happens on the field.