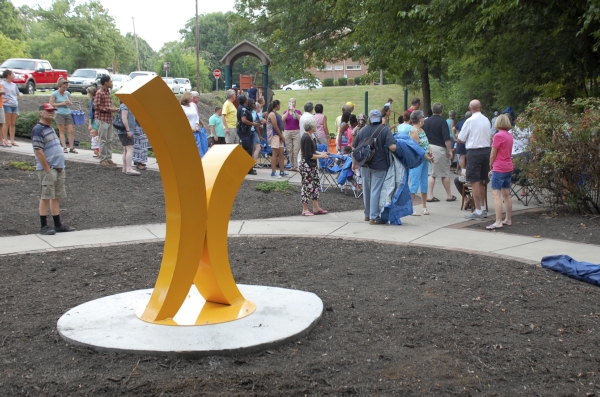 SALISBURY — Sunday’s neighborhood picnic in Centennial Park had the usual things: a covered-dish feast, a few words from the Fulton Heights president and kids taking their turns rolling down the grassy hill.

What was a little out of the ordinary was the unveiling of not one, but two sculptures made possible by some left-over money in the Fulton Heights Neighborhood Association treasury.

The Fulton Heights board commissioned sculptor Matt Amante to make the pieces. The main sculpture, “Opposing Arcs,” is a bright yellow, powder-coated metal structure in the center of Centennial Park.

When this neighborhood park at Wiley Avenue and Stanley Street was designed by Woolpert Inc. of Charlotte in 2005, a spot was designated for “garden art” in that original plan.

The Fulton Heights board interviewed several of the artists whose sculptures are currently displayed around town as part of the annual Salisbury Sculpture Show, and they chose Amante, who teaches art at Pitt Community College.

For several years, Hoy said, Fulton Heights had about $3,500 left over from the fundraising connected with the park’s construction.

With an anonymous $500 donation added in, the board asked Amante if he could provide two pieces for $4,000. He produced “Opposing Arcs” and a smaller piece, replicating the front of a trolley car, which fits in the corner of the playground.

As soon as the trolley car was unveiled Sunday evening, 2-year-old Hudson Palmer ran over to give it his personal inspection. It seemed to reinforce that the sculpture was in the perfect spot.

With its first house constructed in 1903, Fulton Heights was a planned streetcar subdivision by the Southern Development Company. It sponsored the extension of the city’s existing streetcar tracks to the neighborhood in 1904. The streetcar line that serviced Fulton Heights provided direct transportation for workers commuting to Southern Railway’s Spencer Shops.

Fulton Heights as a district was added to the National Register of Historic Places in 1999.

Hoy said Amante, who also is president of Tri-State Sculptors, was great to work with. He could not be present at the picnic Sunday evening because his college classes started Monday.

Amante’s piece for the Salisbury Sculpture Show is located at Livingstone College.

Fulton Heights officers also gave kudos to Steve Brown of the city park staff for his help with Centennial Park. The city dumped and spread five truckloads of new mulch in the park prior to the picnic.

Hoy tipped her hat to Blackwell, a Fulton Heights resident, for all her past work in making Centennial Park, which is an acre in size, possible.

Hoy said the Rowan Arts Council has awarded a $1,500 grant toward a third Fulton Heights sculpture, which will be created by Jeannette Brossart. She will use mosaic tiles to illustrate some of the history of Fulton Heights and also include a welcoming message on one side.