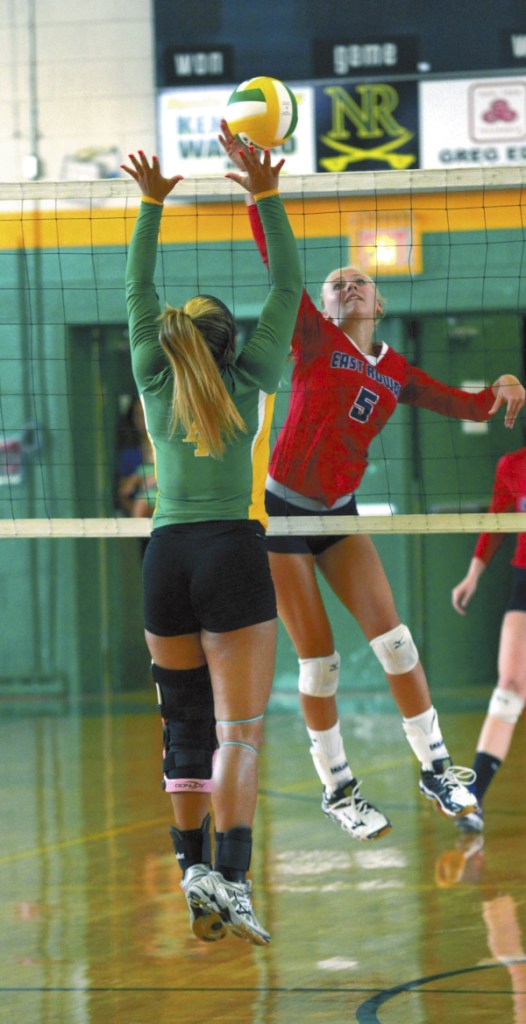 SPENCER — Volleyball action became so heated in the North Rowan gym on Monday that the referee slowly toppled out of his elevated, padded chair at court side.

No harm was done. The official was rescued by alert players and fans before he struck the floor. He bowed to the crowd, grinned and made a “play on” gesture.
Favored East Rowan was nearly toppled as well on opening day, but the Mustangs were rescued by veterans Jordan McCall, Brittany Small and Avery Wright.
East Rowan’s 25-22, 27-25, 21-25 and 25-11 victory was never pretty, but it always was entertaining.
“I thought we played poorly at times, but we responded to difficult situations,” East Rowan coach Sandy Basinger said. “We kept getting down, but we kept working back.”
That sums it up. North Rowan bounces high off the hardwood, and even with three girls getting on-the-job training as setters, the Cavaliers could have won the first set and should have won the second set.
“North has good athletes,” McCall said. “And we had first-game jitters.”
East trailed, 10-3, in the opening set before North faltered. Then the Cavaliers were up 24-22 before allowing the second set to slip right through their fingers.
“We certainly should’ve won the second set,” North coach Sandy Lytton said. “We hit well and we blocked high, but we had some confusion at times. East did a better job of controlling serve-receive than we did. That made the difference.”
With the score tied 21-all in the opening set, McCall, East’s junior setter, came through with a go-ahead kill. Then she set up Wright for two kills and assisted on a game-ending smash by Small.
McCall calmly finished off a wild second set with an ace.
North won the third set, with Brianna White soaring for a block on McCall that turned the tide in the Cavaliers’ favor.
Momentum appeared to be in North’s corner heading to the fourth set. Instead Small, who piled up 22 kills, blew the Cavaliers off the floor.
“I just didn’t want to lose,” Small said.
It was 13-5 in a hurry, and North never got back in it.
“That last set is how it should’ve been all day,” McCall said. “When they won a set, that got Brittany and Avery fired up.”
The good news for North is that Makala Lytton, Central Carolina Conference Player of the Year as a sophomore in 2013, looked healthy after missing the 2014 season with a torn ACL. The senior was all over the court, leading vocally and by example.
“It felt great to be back out there,” she said. “Our hitting was good, we played hard, and we’ll get there. We’re going to have a good team.”
Lytton, White, Aliyah Farmer and freshman Bil’lizah Connor had their moments for the Cavaliers.
“I thought North played extremely well,” Basinger said.
NOTES: North plays at South Rowan on Wednesday. East hosts Salisbury on Wednesday. … Ashlyn Mills, who played volleyball and basketball for North and was all-county in softball, has transferred to East and played some yesterday against her former team.