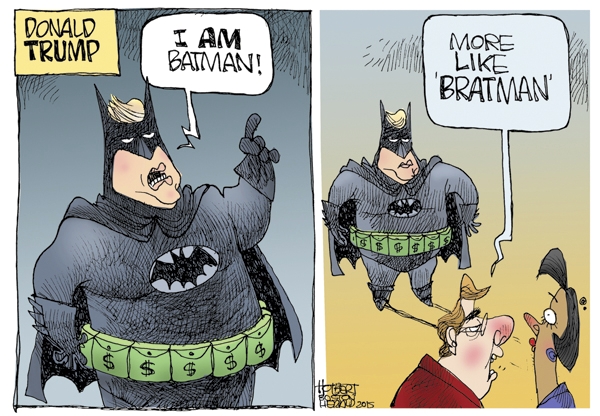 Twenty-four million Americans got their first real look at Donald Trump in the Aug. 6 debate. This is one American’s reaction. I’ve tried to be fair, but I don’t promise anything. You readers be the judge.

Starting off, Mr. Trump, alone among the candidates, refused to promise to support the successful Republican candidate. To me his explanation sounded like the kid who, if he didn’t get his way threatening to take his bat and ball and go home. Not an impressive start.

When Megyn Kelly questioned him about comments on his Twitter and Facebook pages about women, he clearly didn’t like it and denied making them. The comments were subsequently verified by others. Trump’s reaction was “you can see where blood is coming out of her eyes. and out of … wherever.” I didn’t see any blood, or evidence of anger, just an aggressive reporter challenging what I thought was an offensive and sexist attitude. Later, Trump claimed he meant her nose and ears. I don’t believe it.

On being questioned about taking four of his companies into bankruptcy, Trump justified this as being in accordance with the federal laws, which it was, and that the lenders were all “sharp guys” who didn’t need any sympathy, all true. But would you lend him money? I wouldn’t. His marker isn’t good.

When challenged on his claims to have evidence supporting his charge that the Mexican government was shipping criminals, murders and rapists across the border, his answer was that he’d been told this by Border Patrol officers. Period. Basically, “Trust me.” I don’t. Trump was on the border less than an hour, not enough to become even minimally knowledgeable on the subject. He also claimed to be the only candidate to bring immigration up for discussion. Patently not true. Anyone who has followed this issue knows it has been a subject of debate for over 20 years, by every candidate. He’s a couple of decades late to that party.

On the question of his financial support of Democrats, Trump was quite clear; as a businessman he gives money to anyone who can help him. Quite correct and proper, and most business people do the same. At least it gets your phone call answered, and he spreads his money evenly around the field. Any candidate who objects can always send the money back. None seem to have done so as yet.

As for his previous positions, for example on single-payer health care vs. Obama Care or pro-life vs. abortion rights, Trump seemed to have a problem saying “I’ve changed my mind and this is why.” It is hard and I don’t like doing it either, but I’m not running for president. I do think people are entitled to know why any candidate changed his or her mind on important and controversial issues.

On a number of issues Trump has claimed to have a plan to address them, but, like the other politicians, he has failed to lay his plan out. Sounds like a unanimous “just trust me.” Again, I don’t trust any of them.

On a personal note, two things struck me about Trump: first that he has an unusually thin skin, taking offense at anyone who challenges him, particularly women; and secondly, even for a politician he has an awesome ego. I have to wonder how he would get along with members of Congress who are also blessed with substantial egos and aren’t used to being told No.

With all that said, Trump definitely presents a real threat to the Republican establishment and their candidates. First of all, he can self-finance, taking away much of the GOP establishment’s leverage. Secondly, he clearly represents a lot of people who are sick and tired of politics as usual, and the same old promises from the same old candidates. Finally, Wharton doesn’t produce a lot of stupid people. With all of his faults, Trump is a smart guy and will or has already hired some very smart political technicians who know how to run a campaign and how to sign up delegates for the convention and convince voters for the election. I wouldn’t write him off as another rich flake. Very few people get that wealthy by being a flake.

My Turn, Whitey Harwood: Since when did park enforce…