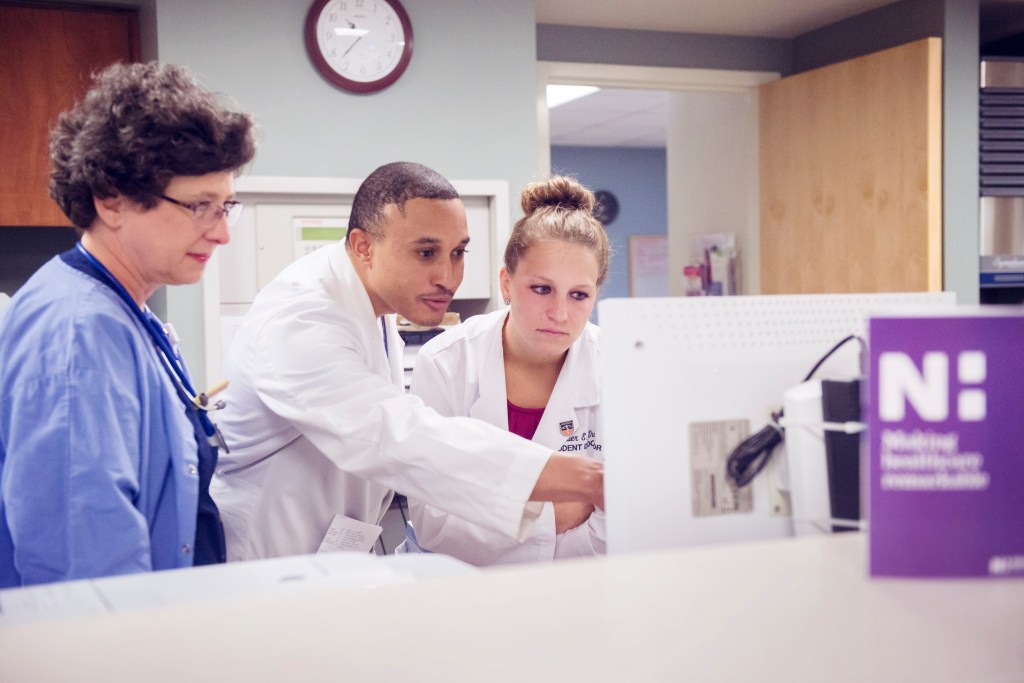 The start of the school year may still be a few weeks away for most people, but one group of students is already back in class.

“It is their first time gaining clinical experience,” said Miz Cobb, the medical education student coordinator at Rowan Medical Center. “The students are here doing a full rotation for their clinicals so they’ll have experience in surgery, family medicine, pediatrics, behavioral health and obstetrics and gynecology.”

As students from an osteopathic school of medicine, the students tend to have a holistic approach to medicine, said Dr. Wink Cline, the hospital’s director of student education. Most, but not all, will enter family medicine or internal medicine.

Amber Duda, a 24-year-old student from Grand Island, N.Y., is interested in pediatric hematology at the moment, but she’s keeping her options open. “We rotate every month through a different specialty, so I want to keep an open mind,” she said.

Anna Brownstein, 25, is from Bethesda, Md. For now, she’s considering pediatrics and family medicine. “Everybody says you can’t really know what you want to practice until you go through all your rotations,” she said.

During their clinical training, the students are paired with physicians, or “preceptors,” and receive hands-on training. “On my first day, I was already seeing patients, taking histories and doing physicals,” Brownstein said. “That kind of training is invaluable.”

Duda said she also appreciates the personal instruction she’s received so far. “Normally as a student, you’re behind a fellow or resident, but with us, we have a one-on-one interaction with the doctors,” she said. Her current preceptor, a cardiologist, has shared his fellowship experiences with her.

“I really love that aspect of it, but it’s also a challenge because they expect more of you,” Duda said.

“They were looking for a certain size hospital that could accommodate a fair number of students and they were also looking at hospitals with good quality scores that they thought would be a great teaching environment for their students,” said Dari Caldwell, president of Rowan Medical Center.

The physicians and other members of the medical community embraced the idea. Caldwell said 85 out of 150 active medical staff offered to serve as preceptors. She said she was surprised by the level of enthusiasm. “For attending physicians to serve as preceptors takes time away from their tight schedules and a fair amount of energy,” Caldwell said.

In 2016, the program will grow to 44 third- and fourth-year students, Cline said. As part of its osteopathic medical education program, Campbell University School of Medicine has committed to providing medical care to rural communities and underserved populations where there is a shortage of doctors.

Caldwell said this is why the partnership between the university and Novant Health is such a great fit. “Campbell’s teaching style is to take students out in the communities where they’ll be needed and all of their training is not occurring in a large metropolitan academic medical center,” she said.

While Salisbury is certainly not rural, much of Rowan County is. “When you get out into a 500-square-mile county, there are a lot of places you go where there are more cows than people,” Caldwell added.

Cline noted there is a huge shortage of doctors in North Carolina with most physicians concentrated in metropolitan centers or at the Duke University and University of North Carolina systems. “One of the things Novant Health wants to do is improve that ratio so we can get physicians where they are really needed in the underserved areas,” he said.

The students and their families settling in the area for the next two years help the community in other ways, too. “Having these bright new people come into our community with their enthusiasm infuses our community,” Caldwell said. “It helps the economy and the overall morale of the area.”