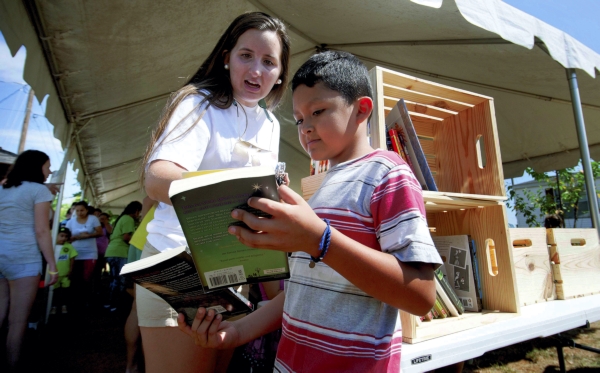 Susannah Horton pulls her zippy gray Volkswagen Jetta up to the big, white tent. She opens her trunk, and pulls out a half-dozen crates of books.

“They’ve got books!” a little blonde girl says as she passes.

Children approach Susannah as soon as she sets the crates on the table, and pretty soon her folding table is completely surrounded with kids.

“There’s always a rush for 10 minutes and then it’s over,” she notes beforehand.

All summer, Susannah, 17, has set up her mobile library at two sites: the Oak Mountain mobile home park off Goodnight Road, and Cleveland Park. Both sites are summer feeding locations for Rowan-Salisbury schools, and volunteers from The Cove Church offer the Go Bananas feeding program for children and adults at Oak Mountain.

Susannah’s project is part of her senior project on reading and literacy. She’s a senior at Carson High School, where she’s attended for the past two years.

Erin Shelton, a former guidance counselor at West Rowan High School and now director for the Cove Kids Ministry for the West Rowan Community Campus — located at the high school — suggested the two locations after Susannah came up with the idea for the mobile library.

First of all, Susannah created a modest Go Fund Me program to buy books and supplies — such as the crates. She asked for $500 and received $600. She also received gently used books, and bought titles in bulk where she could. She purchased books for elementary- and middle school-aged children.

At first, she wrote down each child’s name, and the books he or she checked out. But watch how quickly the children grab the books, and you’ll understand why that process didn’t last long.

The kids could check out anywhere from three to five books. If they brought them back, it was fine. If not, that was fine, too.

She started the project the last week of June, after attending Girls State and a national dance competition, and learned quickly the most popular titles. The Captain Underpants series and Diary of a Wimpy Kid both went fast.

And that was fine with her. Now the children will be able to keep the books.

“If I still have some left, I’ll figure out something,” she says.

The project taught her a lot about patience, she says, “and also the understanding that kids don’t have the same kind of stuff at home that I do.”

Week to week, Susannah saw a lot of the same kids at Oak Mountain. Some kids walk up to the tent; others ride bikes. There are more than 100 home sites in the community, Erin says.

“A lot of these kids are good readers,” Susannah says, but don’t always know what grade level books to choose.

“Some kids here can’t speak any English,” says Susannah, who chose only English language books. “I wasn’t expecting kids who couldn’t speak English. I just never thought of it. So this whole project has been a real learning process for me.”

“There have been a lot of kids out there this summer,” Erin says of the Oak Mountain site. “Susannah has been very organized and the kids have loved it. A lot of those kids don’t have many books in their houses. It’s cool that this site is in Susannah’s community. Kids sometimes don’t realize that there is poverty around them.”

Sarahi Vega, 7, is one of the first children at the table. She picks out “Little House on the Prairie.”

“I love this book,” she says, holding it in one hand and a carton of chocolate milk in the other.

Diego Salazar, 10, picks out two books for himself, and two for his niece, Sharne Suarez, 4, and one for his cousin, Ilene Suarez, 3. Susannah tells him he can pick out three more for himself.

Christina Ortega, 11, selects five books, too: “Lemonade Wars,” “Puppies,” “Thunder from the Sea,” “The Summer I Saved the World in 65 Days,” and “War Horse.” She estimates she’s probably read 25-30 books this summer.

All of the children are unfailingly polite and curious — and they like candy. Susannah brings candy as an incentive to pick out books. You get books, you get candy.

“Diego asked me today, ‘Are we gonna have candy?’ ” Susannah says, setting a large container of ring pop candy on the table, and the candy disappears in seconds.

“Do you have any scary books?” Joseph Pichardo Nava asks.

So far, Joseph, 9, has picked out two titles, “The Boy Who Dared” and “The Name of This Book is Secret.”

“I can look for you,” Susannah says.

“I got a scary book!” says Ryan Laws, 7. He picked out “The Dark Hills Divide,” along with “The Case of the Phantom,” as well as “Wayside School is Falling Down.”

The second-grader notes with pride that he’s reading at a fourth-grade level.

As the children and adults finish their lunches, Danielle Webb, a Cove volunteer, leads a short Bible lesson. Susannah folds her table and takes the crates — now just about empty — back to her trunk.

Susannah is the daughter of Jon and Jenny Horton. This fall, she’s applying early decision to N.C. State University and UNC, and regular decision to the University of Wilmington, the College of Charleston, and Meredith University.

Her favorite subjects are English and history, but she’s undecided as to a major. Her favorite non-core subject is theater — the reason she transferred to Carson. She’s been in “Annie,” “Little Women” and “Shrek.” She’ll audition for the fall plays and the spring musical.