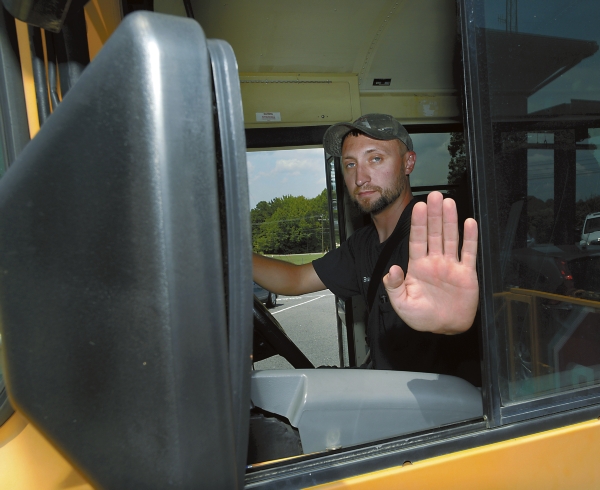 The bus driver, Brian Moeller, the Transportation Supervisor, has his hand out the window to signal a rider to not cross the road yet. The drivers will be using hand signals to the riders this year. photo by Wayne Hinshaw, for the Salisbury Post The Rowan-Salisbury Schools Transportation has added an 4 foot extension to the stop arms this year on 10 of the buses. The arm will extend out over the other lane of traffic and will most likely hit a car if the car passes the stopped bus. photo by Wayne Hinshaw, for the Salisbury Post

Many drivers have had the experience of driving and getting caught behind a school bus during the school year. The instant reaction is frustration and impatience. In these moments it can be difficult to be patient and resist the urge to speed by.

Tim Beck, director of transportation at Rowan-Salisbury School Transport stressed the importance of drivers stopping for buses. “If you see a bus, there’s going to be a child nearby,” he said.

In order to help prevent more of these accidents, Rowan-Salisbury School Transport has made some upgrades to their buses, along with adding new safety policies. Once school starts back, drivers should be extra cautious around busses in the mornings and afternoons.

Some of the buses now have stop arm extensions that will stick out into the opposite lane of traffic, ensuring drivers come to a complete stop while children board and exit the bus.

There are a total of 200 buses that run for the Rowan-Salisbury School System that transport around 20,0000 students. Each of the buses can hold up to 72 students and is programmed to go 45 mph within city limits and 55 mph on highways.

Exterior video cameras have been added, which can help in identifying drivers who fail to stop for the school buses. These buses will be placed around the county in high traffic areas and areas that bus drivers report having issues with other drivers failing to stop when buses stop.

This will also be the first year that all of the school buses will have interior cameras. Beck views the school buses as “an extension of the classroom” ands hopes to get this message across to students.

Beck said there are about 250 bus drivers on an average day. All of these drivers go through special training and are refreshed on bus policies and regulations the week before school starts for the year.

“We have great drivers. Their priorities are the same as ours,” Beck said. He explained that the bus drivers know they are responsible for the kids they transport.

Accessories and technology updates are not the only changes on Rowan-Salisbury School buses. To help ensure student safety, bus drivers will be using a series of hand signals for students to follow before crossing the street.

Students will wait to cross the street as the bus driver holds a hand up, with palm facing them. Once the driver determines it is safe for students to cross, they will give students a thumbs up and then point in the direction they are to cross.

When there is a divider or turn lane at the center of four lanes of traffic, then drivers on the opposite side of the road from the bus do not have to stop. But Beck also wants drivers to know “it’s better to stop and be cautious” if you are unsure of whether you need to stop.

Tips Beck gave drivers for the school year were to “lay the distractions down, pay attention, expect delays and plan your schedule accordingly.” He also encouraged parents to take a few minutes to sit down and talk with their children about bus safety.

When it comes to an “interest of safety” Beck says, “we’re absolutely invested in that.”

No one enjoys getting shots, but unfortunately, they are a necessary evil. In order to go to school in North... read more