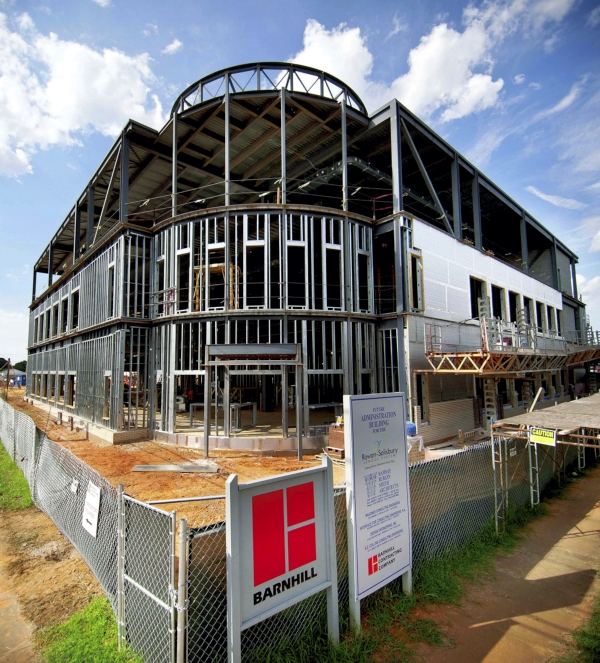 The new Rowan-Salisbury School System central office is under construction at the corner of North Main and West Cemetery streets in Salisbury. School board members debated this week whether to buy new furniture, ultimately approving the funding on a split vote. Jon C. Lakey/Salisbury Post

Furniture for the school district’s new central office was a hot topic at Rowan-Salisbury’s Board of Education meeting Monday.

The district’s capital projects budget, which was initially brought before the board in June, included $500,000 for furniture, fixtures and equipment for the new central office.

Several board members, mainly Travis Allen and Dean Hunter, were upset by the amount of money set aside for furnishings, coupled with the fact that they felt the money for furnishings should have been included in the initial central office budget.

The board decided to approve the capital projects budget without the furnishings line item and brought it back to the board during Monday’s meeting.

“We so easily throw $500,000 at furniture,” Allen said Monday. “We’re choosing to put luxury and nice items in a building with no students in it.”

“You need to put yourself in a student’s shoes,” he said, choking back tears as he explained that his second-grader had mold growing in the floor of his classroom last year.

He said he thought the plan was to take existing furniture over to the new office building saying they could “easily use furniture they already have.”

“It doesn’t minimize the 25 years of capital needs that have been neglected in this county,” said board member Dr. Richard Miller.

“We haven’t bought furniture for any of our five locations,” Superintendent Dr. Lynn Moody said. “Literally, most of our folks in the district office – their furniture is falling apart”

She added that they plan to be as “frugal as possible,” but they also want to purchase furniture that will last and look nice.

“There’s just not much we can take,” she said, adding that many of the desks and shelves are screwed into the walls or nailed down and that there is also a cost associated with moving things.

Bids for furnishings came in Monday as well. The eight bids ranged in cost from $206,000 to $530,000 said Assistant Superintendent of Operations Anthony Vann.

“It doesn’t just include desks and chairs,” Moody explained Monday.

Partitions to create cubicles are a large portion of the bid.

Vann said they have discussed taking some existing furniture over to the new building.

“We’re trying to look at that from a cost perspective,” he said, adding that the cost of purchasing furniture includes the furniture, delivery, unpacking and staging the furniture in the rooms. Using old furniture comes with a moving cost for staff to transport and set up the furniture.

The board eventually voted 3-2 to add the $500,000 line item for furnishings back to the budget. Miller, Susan Cox and Jean Kennedy voted in favor, and Allen and Chairman Josh Wagner were opposed. Vice Chairman Dean Hunter and Chuck Hughes were not present for the vote.

Once a vendor is selected, Vann will bring a final proposal to the board for approval.