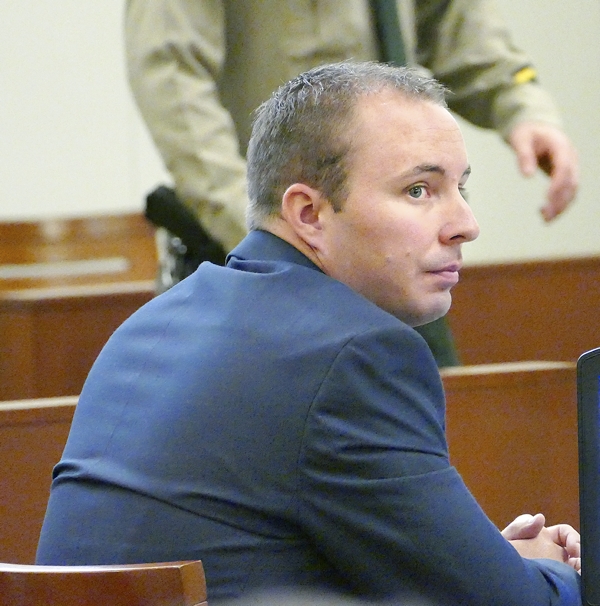 Charlotte-Mecklenburg police Officer Randall Kerrick listens to testimony, Thursday, Aug. 13, 2015, in Charlotte, N.C., during his voluntary manslaughter trial, Wednesday, Aug. 12, 2015 in Charlotte, N.C. Kerrick is charged with voluntary manslaughter in the shooting of Derrick Ferrell in September of 2013. Technical difficulties at the defense table have brought testimony to a halt in the trial of Charlotte-Mecklenburg police officer Randall Kerrick. (Davie Hinshaw/The Charlotte Observer via AP, Pool)

CHARLOTTE (AP) — As a white Charlotte-Mecklenburg police officer returned to the witness stand Friday, prosecutors challenged his statements to investigators on the night he shot and killed an unarmed black man nearly two years ago.

Prosecutor Teresa Postell asked Randall Kerrick why he turned off his dashcam before reaching the home where there had been a breaking and entering call.Kerrick said he didn’t want to alert the suspect that he had arrived, for fear the person would flee.

Postell also pointed out inconsistencies inKerrick’s statements to investigators in the hours after the Sept. 14, 2013, shooting. Kerrick replied that the statement was taken shortly after he’d fought for his life and he apologized for any inconsistencies.

A day earlier, Kerrick testified that he didn’t remember how many times he fired his service weapon at former Florida A&M football player Jonathan Ferrell.

ButKerrick was clear in his testimony about why he considered shooting the man at all.

Kerrick told the jury that he thought his gun wasn’t working because Ferrell kept coming at him.

“I thought I was going to die because I could do nothing that would stop him,” Kerrick said. He said even when he freed himself after Ferrell fell on his lower legs, he kept his gun trained on him because Ferrell was still moving.

Kerrick said he thought he fired four to six times, but said he now knows it was 12 times. Authorities say he hit Ferrell 10 times. Kerrick was the only officer who fired his gun.

Defense lawyers say the shooting was justified because Ferrell charged officers before they could figure out what was going on and he tried to grab Kerrick’s gun when he fell on the officer.

Ferrell was killed a little less than a year before an unarmed black man in New York and an unarmed 18-year-old black male in Ferguson, Missouri, died in separate violent encounters with police — cases that shined a national spotlight on how police treat minorities and sparked calls for widespread reforms. Protests and rioting followed Michael Brown’s death in Ferguson and a grand jury’s refusal to indict the officer. The unrest resumed this week as protesters marked the one-year anniversary of Brown’s death.

Protests also followed the deaths of two unarmed black men after encounters with police earlier this year in Baltimore and South Carolina. Officers have been charged in both of those cases. Kerrick’s trial, while packing the courthouse, has drawn little outside attention. Unlike in some other cases, the officer was arrested and charged about 12 hours after the shooting.