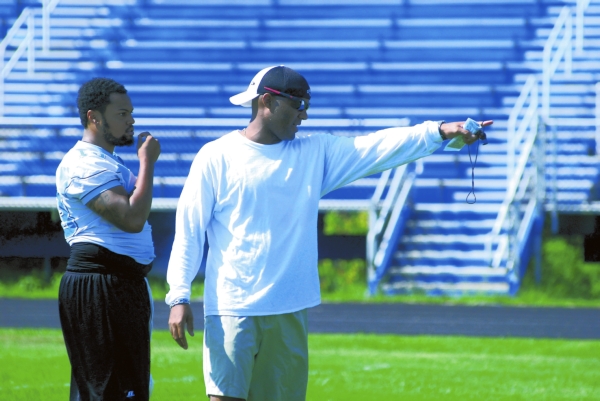 SALISBURY — Bigger, faster, stronger, deeper, tougher.
All those positive adjectives apply to a Livingstone College football program that is on the upswing.
Livingstone has quietly trended in the right direction every year since the 0-11 quagmire of 2010.
The recent records: 1-9, 2-8, 3-7, and then 5-5 last fall in head coach Daryl Williams’ second season.
Last fall, the Blue Bears flirted with the program’s first winning campaign since 1998, although three straight road trips and key injuries created a slide from the euphoria of 5-2 to a final balance sheet of 5-5.
That’s not a losing season, but it’s not a winning season, either.
“We lost our top receiver (Jalen Hendricks) and our senior running back late in the year and that hurt us,” safety Billy Moore said. “They went down and our quarterback (Drew Powell) had to try to put too much on himself. But no excuses. We didn’t finish as strong as we wanted to, but we’ve got a very solid group of guys back. We won’t have to count on freshmen.”
Livingstone was ranked high in national HBCU polls after last season’s torrid start, a taste of sweet success that has the fan base craving more. Powell and Hendricks will be ringleaders. They are back for their senior seasons and they should form one of the more exciting aerial combos in all of NCAA Division II.
“We’ve got things going in the right direction,” Williams said. “We’re seeing the results of our year-round weight program, and our guys are getting stronger. We’re much deeper than we have been, especially at linebacker. That means we can have more physical practices and that’s going to help us win tough games.”
Williams has the largest staff he’s had. Besides familiar faces Rodney Hughey and Carl James, young coaches include Tony Keiling (linebackers), Josiah Simms (offensive line) and Avery Collins (receivers), who was catching passes from Powell not long ago.
“It’s good to see a roomful of coaches when we meet,” Willams said. “Our administration is giving us what we need to succeed.”
Livingstone was picked seventh in the preseason poll for the 12-team CIAA. Williams saw that as a positive.
“Well, at least they’re not picking us last anymore,” he said with a smile. “Our energy is good. Everyone is upbeat about where we are.”
Williams saw 95 Blue Bears report for duty on Monday. The first practice was held on Wednesday.
The schedule is conducive to another fast start. Livingstone opens against Benedict in Columbia, S.C., on Sept. 5. That game is followed by a trip to the University of Virginia-Lynchburg, a team the Blue Bears throttled in 2014.
Then comes the home opener against newcomer Redemption Christian College, before the Blue Bears get down to serious business with seven CIAA games.
The Blue Bears were two plays away from 7-3 last season — losing, 31-30, to St. Augustine’s and 31-28, to Fayetteville State.
This might be the year things bounce their way.