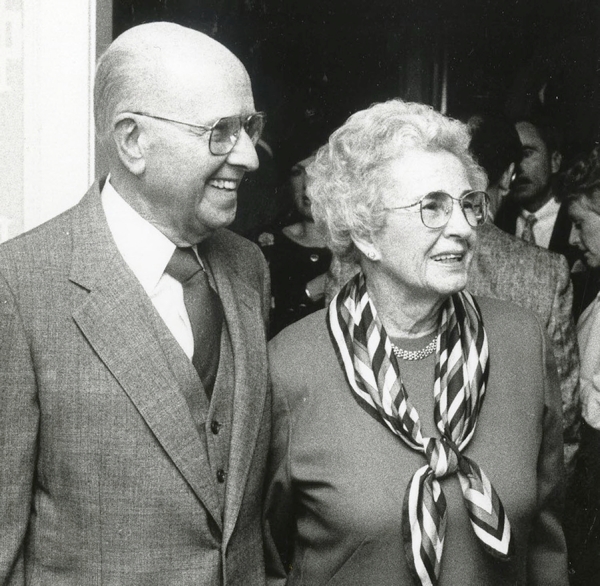 SALISBURY — Addie Glover Ketner seemed to part of a lot of firsts.

She belonged to the first graduating class of Boyden High School (now Salisbury High) in 1927.

That same year, she attended the dedication of the new St. John’s Lutheran Church at 200 W. Innes St. and would later become one of the first women to sit on the church council.

She guided the women’s auxiliary at Rowan Memorial Hospital during its early years and was a charter member of the longstanding Amicitia Book Club.

She also became a crucial cog in what could be called Salisbury’s First Family of Grocery — the Ketners.

Addie Ketner squeezed many firsts into a full life of 104 years. She died Monday, and a memorial service will be held at 11 a.m. Saturday at St. John’s Lutheran after the family attends a private burial at City Memorial Park.

“She was one of the most thoughtful, generous people you could ever hope to know,” her son, Glenn Ketner Jr., says.

Up until only a few weeks before her death, Addie Ketner kept a list and was still making sure birthday cards were going to all her family members and friends — and there were many.

Over the years, Addie and Glenn Ketner Sr. formed one of the more dynamic husband-wife teams in Salisbury. They were able to celebrate 77 years of marriage before Glenn’s death in 2007, and they left behind a legacy of giving to their church, where Addie was a member for more than 80 years.

They also left their mark on the community at large by funding college scholarships and programs. Through their Glenn E. and Addie G. Ketner Family Foundation, the couple contributed to numerous educational, cultural and health-related causes.

She was a country girl from Rowan County whose destiny started taking shape with long walks and ice cream.

As a young girl, Addie Glover attended school in Faith, Wanting to continue her education, she moved to Salisbury to live with her older sister Allene in a North Main Street boardinghouse.

She walked to school daily, and eventually a young man named Glenn Ketner started carrying her books and joining her on the long walks home every afternoon. At the end of their walks, Glenn would treat her to double-dip ice cream cones at his father Bob Ketner’s store, which was close to where she lived.

Thanks to those long strolls and many scoops of ice cream, a romance bloomed.

Addie graduated from Boyden High School in 1927 and enrolled at Catawba College, but the expense proved too much. In January 1929, though it meant leaving Glenn behind, she decided to move to Dayton, Ohio, with another sister, Hazel, Their brother Howard already was working in Dayton, and Addie found a job in the accounting department at McCall Patterns.

She kept writing Glenn until the summer of 1929, when he decided to move to Dayton, too. “He wasn’t about to let her get away,” Glenn Jr. says.

Glenn Sr. was only 17 at the time. In Ohio, thanks to his experience in his father’s markets, he soon became a grocery store manager, then signed on with Cook Coffee Co. Glenn Jr. says it was mostly a door-to-door sales position. His father became the company’s top salesman.

In the summer of 1930, Glenn and Addie eloped, crossing the border into Indiana where it was easier to be married — as it used to be for many couples in North Carolina who eloped to South Carolina.

Glenn and Addie rode a bus to their marriage destination, and they honeymooned on slices of watermelon in a bus station cafe before returning to Dayton.

Meanwhile, Bob Ketner kept sending word to Glenn that he wanted him to return to North Carolina. Glenn finally gave in to his father’s pleas in November 1931 and came home to manage the Kannapolis store, even though he was only 20. Addie was, of course, part of the package deal.

By the early days of the Depression in 1932, Bob Ketner had established a solid business that included four small stores in Salisbury and the one in Kannapolis. But a burst appendix led to Bob Ketner’s death in March 1932.

Bob Ketner’s surviving family members found themselves in a pickle. He had died without a will and had never incorporated his businesses. His five stores had to be auctioned off one by one, and Glenn relied on a $600 loan from Addie’s father, James Glover, to purchase the Kannapolis store he had been managing.

Until they started raising a family, Addie worked right beside Glenn, who pressed on and would open a second and third Kannapolis store by September 1933. Glenn’s teenaged brother Ralph Ketner worked for him in Kannapolis. It was Ralph Ketner, their brother Brown and Wilson Smith who would go on later to build the Food Town/Food Lion grocery chain from one store in Salisbury in 1957.

By June 1936, Glenn Ketner fulfilled his goal of having a store back in Salisbury. From there, with brothers Ralph and Brown Ketner and Wilson Smith honing many of the same skills they would use to make Food Lion a success, Glenn Ketner built the often innovative Ketner Super Markets and a supporting warehouse operation, Excel Grocery.

“Everywhere we went traveling,” Glenn Jr. recalls, “we were in and out of supermarkets.”

In 1955, Glenn Ketner  merged his 10 stores with John Milner’s 15 Piggly Wiggly stores to create Ketner-Milner. But Ketner-Milner sold all those stores to Winn-Dixie in 1956, and after a brief time as a Winn-Dixie executive, Glenn — and Addie — were out of the grocery business for good.

Addie Ketner immersed herself in her family, church, the hospital auxiliary, her book club, the local Daughters of the American Revolution chapter and her genealogical research.

The John Crawford Bernhardt family history is part of the Rowan Public Library collection, and Glenn Jr. says it is continually being updated and will soon be ready for a second printing.

Glenn and Addie Ketner had two children: daughter Carolyn Penny of Durham and Glenn Jr., an attorney in Salisbury. They also had six grandchildren and 10 great-grandchildren.

On Sundays at St. John’s Lutheran, Addie and Glenn always sat in the section near the baptismal font. “The church had been so much a part of her life,” Glenn Jr. says, and more toward the end of her life, she wanted to contribute money toward projects where the results were visible.

It was Addie Ketner who donated the significant amount of money needed to replace the front stone steps at St. John’s Lutheran. She followed the project closely, and Franco Goodman periodically would take pictures of the progress and run them by Addie Ketner’s home for her to see.

The congregation celebrated with Addie Ketner on Easter Sunday when she joined Pastor Rhodes Woolly at the top of the new steps.

“She was very pleased and very proud of that,” Glenn Jr. says.