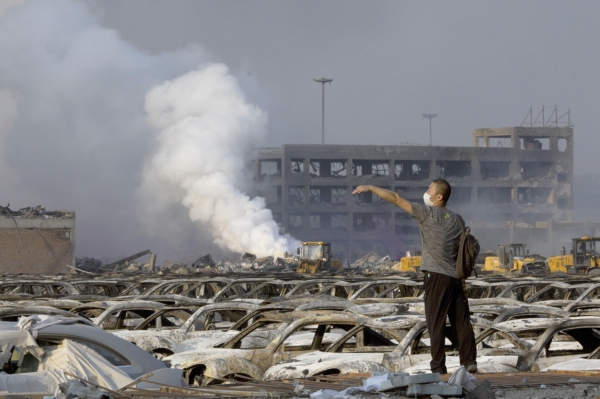 In this photo taken Thursday, Aug. 13, 2015, a man walks through the site of an explosion at a warehouse in northeastern China's Tianjin municipality. Rescuers have pulled a survivor from an industrial zone about 32 hours after it was devastated by huge blasts in Chinas Tianjin port. Meanwhile, authorities are moving gingerly forward in dealing with a fire still smoldering amid potentially dangerous chemicals. (AP Photo/Ng Han Guan)

1. WHAT ONE CLINTON EMAIL CONTAINED

2. ABE EXPRESSES GRIEF FOR THOSE WHO PERISHED IN WORLD WAR II

Japan’s prime minister acknowledges the “immeasurable damage and suffering” inflicted on the innocent by his nation, but says future generations should not have to keep apologizing.

3. HOW A MASSACHUSETTS CITY IS DEALING WITH ADDICTION

Addicts can turn in their narcotics to Gloucester police — no questions asked — and officers, volunteers and trained clinicians help connect them with detox and treatment services.

4. KERRY IN CUBA TO SET DIPLOMATIC RELATIONS IN STONE

The secretary of state comes to Havana to raise the American flag over the newly reopened U.S. Embassy in a symbolically charged victory lap for the Obama administration.

5. A LIGHT AMID TRAGEDY

Rescuers pull out a firefighter trapped for 32 hours after responding to two huge explosions in Tianjin, state media say, blasts that killed at least 50 people.

6. GULF EATS AWAY AT COAST OUTSIDE NEW ORLEANS

AP’s Cain Burdeau finds that since Hurricane Katrina struck in 2005, efforts to stem Louisiana’s coastal land loss have been neglected, leaving the city and surrounding communities’ future in doubt.

The contentious vote approved the terms of a three-year, $93 billion rescue package that includes harsh spending cuts and tax hikes.

8. BARRY BONDS HAS ‘WEIGHT LIFTED OFF MY SHOULDERS’

AP’s Janie McCauley reports that the home run king is unconcerned with people’s thoughts on his career or credentials: He believes he deserves to be in the Hall of Fame.

9. WHAT’S IN OCEAN MAY SURPRISE YOU

There are millions of tons of oceanic debris, from Legos to abandoned fishing nets to industrial trash — to possibly some pieces of Malaysia Airlines Flight 370.

A diamond and gold pendant Elvis Presley gave Sammy Davis Jr. is among 160 authenticated artifacts sold during an auction at Graceland.

It’s warmer this morning a a little muggier, starting at 67 degrees, with a high dewpoint. Today will be mostly... read more