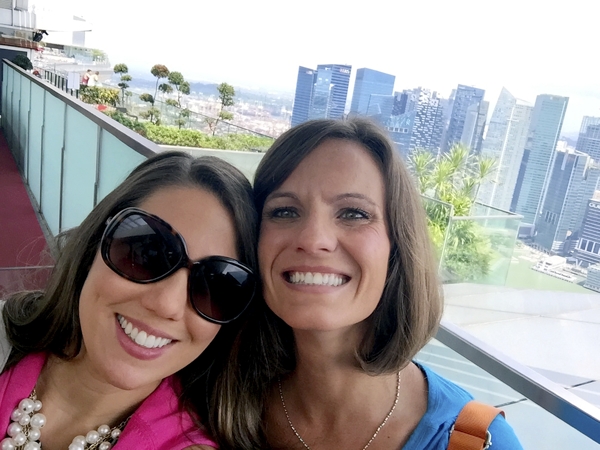 Lindsay Cooney, left, and Cassie Thompson traveled this summer with the Center for International Understanding to learn more about STEM (science, technology, engineering and math) education and to gain a global perspective. Cooney is Kannapolis City Schools’ teacher of the year, and Thompson is Rowan-Salisbury’s. Submitted photo

Lindsay Cooney and Cassie Thompson are excited to share about their experiences visiting schools and exploring new cultures in Singapore and Malaysia with their students this year.

Cooney, who is a health and adaptive physical education teacher at Kannapolis Intermediate School, and Thompson, who is an instructional reading design coach at Morgan Elementary, were each named teacher of the year for their respective school districts for the 2014-15 school year. Thompson was honored for her work at Woodleaf Elementary School as a first-grade teacher. The trip was part of the award each of them received.

Each year, the teachers visit a different country to better understand how education is approached in different parts of the world.

“Our main purpose was STEM (science, technology, engineering and math) education,” Thompson said. “We also wanted to gain a greater global awareness and bring that back to the classroom.”

Singapore’s education system is constantly ranked as one of the best in the world, and Thompson and Cooney had the opportunity to study some of the reasons for that.

“We had to continue to remind ourselves that we cannot compare nation to nation,” Thompson said.

Singapore is a small, urban country with great diversity.

“It’s so small as a nation, they compared it to the size of Charlotte,” Thompson said.

Its population is primarily made up of three different nationalities – Chinese, Indian and Malaysian.

Classes are taught in English, but each student also has a class in his or her native language.

“Everyone was about uniting the country,” Cooney said, explaining that Singapore just celebrated its 50th anniversary as an independent nation.

“There’s such a great deal of respect,” she added, explaining that children would stand and say, “Hello, teachers” every time they entered a classroom, and that principals would knock and ask permission before coming into a classroom.

“As a nation, they know their future is in education,” Thompson said.

One of the first things Cooney noticed when she stepped off the plane was an advertisement on the wall promoting education.

Singapore’s education system is well planned out, all the way from lesson plans to the career path a child will take, Cooney said.

“It’s hard to really describe it until you experience it,” she said, explaining that students take aptitude tests in middle school that determine which track, or path of education, they will take.

“It really motivates the kids,” she said. “They really wanted to get into a good track.”

One of the biggest differences Cooney and Thompson noticed was the amount of funding that Singapore invests in education.

“They are pouring money into their education system,” Thompson said. “That was a striking difference.”

Teachers are paid comparable salaries to those in other career paths. Teachers and students alike were given opportunities to travel to gain cultural awareness, and professional development was supported.

When a child is born in Singapore, the government deposits a specific amount of money into a special account for that child to be used for education. Each year, an additional amount is added in, as well. Parents can use these funds for private kindergarten, field trips or other education-related expenses.

“Character education and well being was another big emphasis,” Thompson said.

“The schools were just so warm and welcoming,” Coney said. “Every bit of their school building was designed for learning.”

Just like the students, teachers’ career moves are also determined by the Ministry of Education.

“It’s very fluid how they move people in and out,” Cooney said.

There was also an incredible amount of community buy-in.

“Each community has a group responsible for uplifting their people, and how they do that is tutoring,” Cooney said.

“If students wanted extra help, it was there,” she said. “The communities are invested in the education of their students.”

But not everything was vastly different from education here in the United States.

“I was surprised. I expected to see technology far and above what we have,” Thompson said. “That was a pleasant surprise.”

“It was kids just like we have in our classrooms,” she added.

“I was expecting … something bigger and better,” Cooney said.

She added that she thinks the strong emphasis on character education makes all the difference.

“The families took great pride in education,” she said. “It didn’t seem like the students took it for granted. They were excited about their learning.”

Cooney and Thompson were able to squeeze a little bit of site-seeing into their trip as well, including the Super Trees, the Batu Caves and other popular tourist attractions.

One day, the pair went to the beach for a while.

“I wish every teacher could have that same experience,” Cooney said.

Cooney’s trip was paid for by the Miriam and Robert Hayes Charitable Trust of Concord, and Thompson’s was sponsored by the Blanche and Julian Robertson Family Foundation of Salisbury.

Nine injured as passengers flee burning bus along I-85