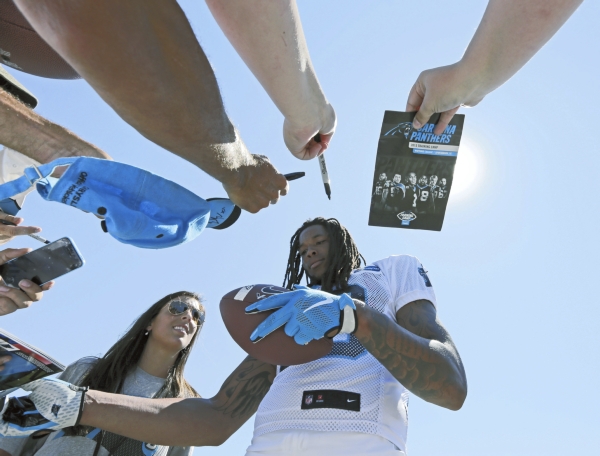 Now he’s the player the Carolina Panthers are counting on to help them make a deep run in the NFC playoffs.

In just one season, Benjamin has gone from a wide-eyed rookie to being the team’s No 1 receiver. That’s what happens when you catch 73 passes for 1,008 yards and nine touchdowns in a season — all Carolina rookie franchise records.

Benjamin isn’t scared about the pressure of being a team leader and the No. 1 receiver for quarterback Cam Newton.

“I have to go 10 times harder than I did last season because I have guys looking up to me now,” Benjamin said.

Along with his production, wide receiver Ted Ginn Jr. said Benjamin has earned his respect because of his approach to the game on and off the field. Ginn played in Carolina in 2013 before Benjamin’s arrival, but watched him from afar last year in Arizona.

Ginn said the biggest thing he’s learned about Benjamin in training camp is “he’s a perfectionist.”

Cotchery agrees, adding that what makes Benjamin great is his “eagerness to get it right.”

“He is highly competitive, so if a guy gets the best of him in a one-on-one matchup he wants to go right back at them. He doesn’t want to sleep on it,” Cotchery said. “It’s refreshing to see a young player like that.”

Unlike many outspoken receivers in the NFL, Benjamin comes across as a laid-back guy when speaking to reporters. But teammates say he can get angry at himself.

Benjamin chuckled at that notion, but didn’t dispute it.

“I get mad about the little things I do wrong,” Benjamin said. “I could have been better on this and used my hands more on this route — just holding yourself to a high standard.”

Panthers coach Ron Rivera said Benjamin is having an “outstanding” training camp after missing most of OTAs and minicamp with strains in both hamstrings. After being overweight during the offseason, Benjamin reported to training camp leaner than he was last season.

That has Rivera excited about what Benjamin can accomplish in year two and beyond.

The imposing 6-foot-5, 245-pound former Florida State standout showed a knack for making big plays as a rookie, using his height and leaping ability to come down with highlight-reel catches over smaller defensive backs.

Benjamin relied heavily on that size and athleticism early last season — perhaps a little too much.

As the season progressed he found more and more teams rolling double coverage his way and greater challenges getting open. He also found himself hitting the so-called rookie wall late in the year and said he got “a little lazy” in some of his comeback and curl routes.

He’s vowed to change that this season by being in better condition, studying more tape and focusing in on the details in his route running.

“I mean it’s really no pressure,” Benjamin said of his new leadership role. “You have the same job. You just have guys that are going to feed off your energy. So whatever your habits are, they’re going to pick up on stuff. Come off the ball every play, finish blocks — little things like that. The younger guys will see that in me.”

The Panthers think Benjamin can be great.

He agrees, saying playing under wide receivers coach and former NFL receiver Ricky Proehl the sky is the limit.

“Man, it’s crazy the potential being under Ricky,” Benjamin said. “How long he played in the game and with him just teaching me. I’m like a sponge who is soaking everything in right now. I’m willing to learn and get better.”