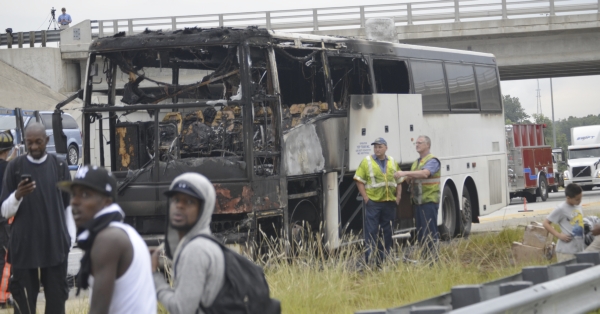 About 80 passengers were displaced Tuesday morning following a bus fire that occurred on Interstate 85 near mile marker 79 and exit 81. Travelers boarded the bus in New York and some were headed to Charlotte while others to Atlanta when it caught fire. Shavonne Walker/Salisbury Post

Nine injured as passengers flee burning bus along I-85

Panic ensued early Tuesday as passengers fled a burning bus headed for Charlotte from New York. Nine people received various minor injuries and of those, four were taken to the hospital.

Passengers boarded the bus, with YEP Tour Inc., based in Dorcester, MA, at a terminal in New York and then traveled to Durham. The bus was scheduled to make stops in Charlotte and Atlanta.

N.C. Highway Patrol Trooper S.L. Herrin said the bus was traveling south on Interstate 85 when it blew a tire. The bus driver pulled to the left shoulder between exits 79 (Spencer/East Spencer) and 81 (Long Ferry Road).

Herrin said the driver, Wei Xiu, called two roadside assistance companies, both of which were closed. Xiu then called his company. Around 6:30 a.m. or 6:45 a.m. the driver noticed smoke, Herrin said.

According to Herrin, the driver said he notified passengers about the fire and they began evacuating, many jumping from emergency windows.

Herrin said three people received injuries when they jumped from emergency windows, and one woman’s ankle was stepped on by another passenger.

About 80 passengers boarded two Rowan-Salisbury School buses that arrived around 8:40 a.m. The school buses took the passengers to McDonald’s on East Innes Street to await another YEP Tour bus.

Rowan County Emergency Services Division and the Rowan County Fire Marshal’s Office were on the scene and officials confirmed the bus did appear to have mechanical failure. Salisbury Fire and Miller’s Ferry Fire departments responded.

David Williams and his wife Elizabeth were on the bus and said they were on vacation, heading to Charlotte from New York to spend time with family.

After the tire blew, Elizabeth said, the bus driver turned on the air conditioning because it had begun to get hot, but they all sat on the roadside for about an hour to an hour and a half. She said passengers asked what was happening, but didn’t receive any answers.

She said someone suddenly yelled there was a fire and the scramble to exit began with some jumping out of windows and others making a dash for the only door at the front of the bus.

“People were pushing. It was a nightmare you don’t forget,” Elizabeth said.

The couple said they usually travel by Greyhound, but chose YEP Tour Inc. because of the lower price. They vowed this would be their last trip with the company. The two called a relative who drove from Charlotte to pick them up along the roadside.

Elizabeth said she’s not sure what they’ll do to get back to New York because they booked a return trip with the company, but she refused to return on the bus.

Clarissa Seabrook traveled from New York and was heading to Atlanta. She described the ordeal as a “bad experience,” saying passengers sat on the bus for about an hour before they made a hasty dash to exit.

Seabrook said flames were visible to passengers as someone screamed for them to get off the bus.

She sat in the sixth row and was fortunate to get off without injury, she said.

Seabrook said this will be her last time traveling to Atlanta by bus.

Another passenger, Anthony Hunter, had his forearm covered in an ointment where he was treated at the scene for minor burns. Hunter received those burns while trying to grab his and other passengers’ luggage from the luggage compartment.

Hunter also took cell phone video of flames shooting from the undercarriage of the bus near the wheel that eventually spread to the front of the bus. Hunter also claimed the bus driver was speeding.

The driver was not charged, Trooper Herrin said.

One passenger, who did not wish to give his name, said he was traveling from New York to Atlanta. He said he believed the bus was having tire issues well before the tire blew. He said about an hour into the trip he felt as though the bus appeared to be “swerving,” but he chalked it up to being a shaky bus and the road conditions.

He fell asleep, and when he awoke the bus had blown a tire. The man said within the next moment, a fire began on the left front side near the wheel panel. He said passengers panicked and began jumping out of windows. He helped an older man with a cane off the bus. He described the scene as chaotic.

The man said passengers helped each other exit the bus.

A message left for company officials was not returned. According to the Federal Motor Carrier Safety Administration, the company has 45 drivers in its fleet of 29 vehicles.

As of Monday, YEP Tour buses had received a total of 234 inspections for the 24-month period listed with the safety administration. In those inspections, there were 218 reported violations among the buses. Some of the violations were for unsafe driving and compliance issues, but the majority were for vehicle maintenance.

Some of the violations for the buses included flat tires, tire fabric exposed and inadequate tire tread depth. The last listing for an inspection with the fleet occurred July 5. There were a few violations listed for the last inspection that included records of drivers’ duty status not being current and drivers who did not speak English, inadequate front tire tread depth, improper or no wiring protection, and defective or no emergency exits.

It is not clear from the information provided on the Federal Motor Carrier Safety Administration’s website if the particular bus that caught fire had any safety violations.

Trooper Herrin said the investigation continues with the Motor Carrier Division of the Highway Patrol, whose investigators should address the mechanical safety of the bus.

Rowan Museum will close its popular “Off the Shelf” exhibit Sunday, Aug. 23. This exhibit includes items brought right off the shelves... read more