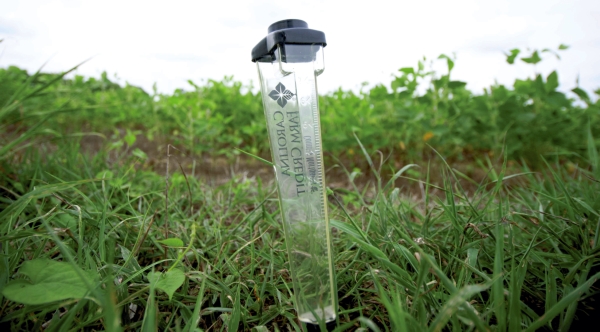 JON C. LAKEY / SALISBURY POST A farmer's empty rain gauge is stuck in the ground near a field of soybeans along NC Highway 801 in Western Rowan county on Monday afternoon. Less then normal rainfall has effected the growing of crops and dried out lawns. Drought moniters have classifed nearly all of Rowan County as moderate drought. Stunted corn fields and hay fields are producing much less crops. Monday, August 10, 2015, in Rowan County, N.C.

Drought conditions in North Carolina have worsened and widened to a larger portion of the state, but the supply that feeds water lines in Salisbury and other Rowan municipalities is chugging along significantly above severe levels.

Salisbury-Rowan Utilities issued an alert over the weekend in response to the moderate drought conditions near its intake on the Yadkin River. The alert, however, doesn’t include voluntary or mandatory water restrictions. Salisbury-Rowan Utilities Director Jim Behmer said available water flow on the Yadkin only serves as a warning to customers that drought conditions exist. Rain conditions in Rowan don’t have a major affect on river levels, Behmer said.

“It could actually not rain for several months and we would still be OK,” he said.

Salisbury’s water supply — the Yadkin River — is fed by tributaries from mountainous regions of Virginia. Behmer said a drought in mountainous regions of Virginia may have a more significant affect on the Yadkin River’s flow than one in Rowan County. The most recent statistics show abnormally dry and moderate drought conditions ending just south of the North Carolina border.

Voluntary water use restrictions would begin when the Yadkin River reaches 323 million gallons per day at Salisbury’s intake. Level one voluntary restrictions would include a 5 percent potable water use reduction goal, limiting lawn irrigation to hours between 9 p.m. and 4 a.m. and showers being limited to four minutes or less.

The alert issued this weekend contains similar recommendations for water users who want to be proactive. Salisbury-Rowan Utilities said residents could turn off off faucets while shaving, brushing teeth or washing dishes. Operating washing machines and dishwashers with full loads only was another recommendation.

Because they rely on rain and not river levels, many farmers in western Rowan have seen significantly decreased crop yields as a result of the drought. The drought has most notably negatively affected corn crops.