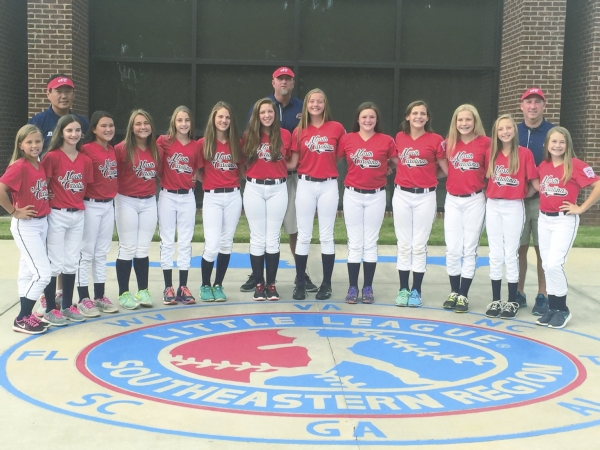 SALISBURY — Rowan Little League softball is ready to take on the world.
Thirteen girls, ages 11 and 12, are flying out of Charlotte this morning on an adventure that will take them first to Phoenix, and then on to the Little League World Series in Portland, Ore.
There are all sorts of factors to consider in a once-in-a-lifetime enterprise of this nature.
“Six of our girls have never flown, so this is going to be something brand new,” coach Steve Yang said. “Most of them will be making that first flight without their parents. Almost all of their parents will be making the trip, but on different flights.”
Little League International is picking up the tab for the players and coaches Yang, Rob Hales and Eric Dowling, but parents must pay for an expensive trip that will include a lengthy hotel stay and rental cars in addition to a cross-country flight.
“We’ve had a lot of businesses and banks come through with pledges and donations to help, so almost all our parents will be in Oregon,” Yang said. “The biggest challenge has been finding people to cover work and jobs while they’re away.”
The coaches have taken precautions not to lose anyone in the airport.
“All the girls will be wearing their purple Southeast Regional shirts,” Yang said. “They won’t be hard to keep track of.”
After the flight Tuesday, a shuttle will transport the team to the hotel where they’ll stay for a week. Rowan will play a minimum of five games. If they reach the semifinals, they’ll play six games at Alpenrose Stadium, a former dairy farm converted into the centerpiece of Little League softball.
Opening ceremonies will be held Wednesday and will be followed by an ice cream social and skills competitions. Festivities this week also will include a pool party and a barbecue.
“We’ll only be on the field two hours a day, but there will be plenty for the girls to do,” Hales said.
Imperial Brown, which manufactures freezers and walk-in coolers, employs quite a few people in Salisbury and the company headquarters happens to be in Portland, Ore. Yang has heard that Imperial Brown is planning to do something special for the Rowan girls.
The games start Thursday. It will be 7 p.m. in Salisbury when Rowan takes on the Canadian champions in the first round of pool play.
Rowan charged through double-elimination district, state and regional tournaments with 12 straight victories, but Yang and Hales said the girls have faced — and responded to — pressure situations.
Rowan was in a 1-0 game against Wilkes in the winner’s bracket final of the state tournament and also prevailed in a tense game with the Georgia champs in the regional final at Warner Robins, Ga.
“There were thousands of people in Warner-Robins cheering against them and the girls won,” Hales said. “The Georgia team chose to bat first, to try to jump ahead, and they went down 1-2-3. Then we scored in the bottom of the first and held the lead.”
With all the things happening in Oregon, Hales is confident the team will continue to focus, play at a high level and show maturity beyonds its years.
“We’ve stressed to the girls about how much fun this trip is going to be,” Hales said. “There were 6,000 teams that started on this journey worldwide and now it’s down to 10. This is the biggest stage you can play on, but it’s still softball. If we play defense the way we’ve been playing and hit the way we’ve been hitting, we’ll be fine.”
The 10 teams have been divided into two pools. Rowan’s five-team pool includes Canada, The Philippines, the Central Region champs (Iowa) and the West Region champs (Washington). The other pool includes Puerto Rico, Uganda, the Southwest champs (Texas), the East champs (Rhode Island) and the host team Tigard, Ore. Teams play everyone in their pool, with the top two from each pool advancing to ESPN-televised semifinals.
“It’s scary thinking about Rob and I being mic-ed up for TV,” Yang said with a laugh.
Rowan coaches have done their research. Mainland American softball teams have won all but one Little League World Series since 1974. Puerto Rico, representing Latin America, won once. Southwest and Southeast regional champs have traditionally been tough teams to beat.
“There’s a lot pressure winning the regional because you always want to advance to the next step,” Yang said. “There’s less pressure now because there’s no next step. The girls have gone as far as they can go.”
The girls are pitcher Kali Martin, catcher Caitlin Mann, pitcher-outfielder Taylor Walton, outfielders Jaden Vaughn, Kaylin Dowling, Liza Simmerson, Megyn Spicer and Caylie Keller, first baseman Kary Hales, second baseman-outfielder Taylor Sanborn, second baseman Ellie Wilhelm, third baseman Ellen Yang and shortstop Allison Ennis.
There are five girls from West Rowan Middle, three from Southeast Middle, three from Mooresville Middle, one from Erwin Middle and one from Knox Middle.
Rowan’s battery is from Mooresville — Morton and Mann.

Morton has been powerful in the circle and dominated the regional. Ennis, Hales, Yang, Martin, Mann and Walton have been the leading hitters.
“All these girls have competed and gotten the job done,” Yang said. “You always hope they can do something like this, but you still don’t expect it.”
Nine of the 13 Rowan girls will be eligible to play in the 11-12 age group again next season, but no one’s worried about next year at this point.
The team held its last practice on its home field on Sunday night.
“That last one was bittersweet,” Yang said. “These girls will be coming back from Oregon on a Thursday (Aug. 20) and they’ll start school that Monday. They’ve literally played softball all summer.”